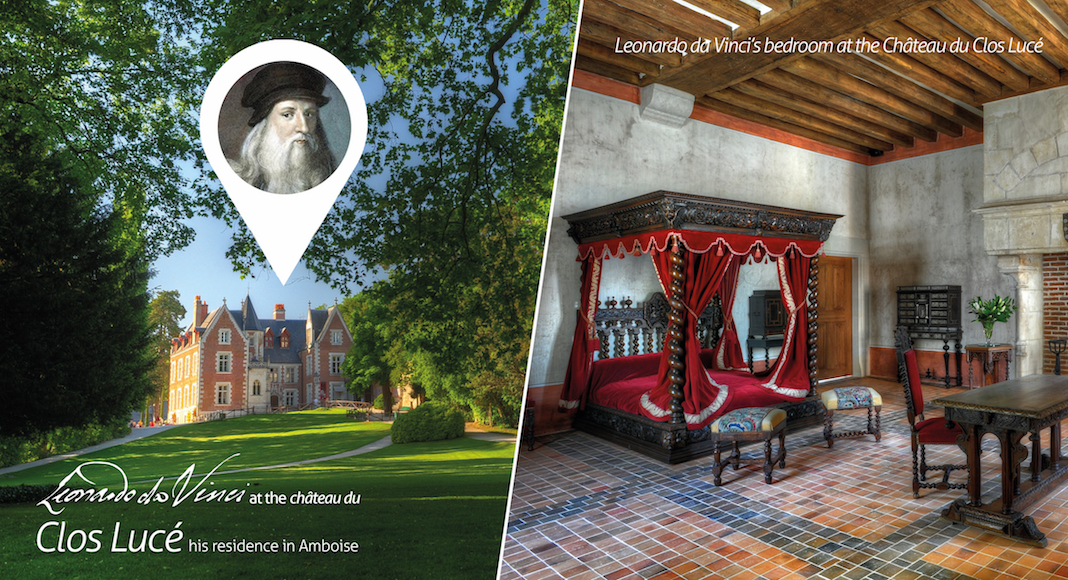 After 500 Years, Leonardo Da Vinci’s Life at the Château Clos Lucé has Been Recreated

(Sponsored) So you think only Italy can say Leonardo Da Vinci, the famous Italian artist and scientist, is their claim to fame? Think again! During the last three years of his life, Da Vinci lived and worked in France at Château Clos Lucé near the Château d’Amboise.

By invitation from King Francis I, Leonardo Da Vinci left Italy in the fall of 1516, to come and live in Amboise, bringing along with him three of his masterpieces (the Mona Lisa, the Saint-Anne, and the Saint-John-the-Baptist) together with his scientific journals and manuscripts.

At Clos Lucé, a summer private residence for French kings, the artist-scientist worked endlessly in his workshops for the king on many great projects. Da Vinci died in his bedroom on May 2, 1519. Now 500 years after he walked the Château’s halls, thanks to a 60-year restoration project, Close Lucé is living tribute to Da Vinci and his contributions to art and science.

A Day in the Life of Da Vinci

Frozen in time, Clos Lucé is a recreation of the life Da Vinci had in France: his bedchamber, the frescoes painted by his pupils in the chapel, the old kitchen, the council room where he welcomed many high-ranking visitors as well as local Italian artists to receptions and feasts, are all just as Da Vinci experienced them. There’s even a one-of-a-kind collection of 3D-models based on Da Vinci’s original drawings.

Transporting visitors back in time, the artist’s studio still has the feel of a typical Bottega from the Renaissance. In the study, antique books and facsimiles from the Institute de France lay beside an astonishing cabinet of curiosities. His workshop has been restored so meticulously, you would think Da Vinci could walk in at any moment. It was in these workshops that Da Vinci brought the final touches to his masterpieces, as documented by the Cardinal of Aragon, who often came to visit Da Vinci. Through an impressive use of optical theatrics, the encounter between the two men has been recreated in the artist’s workshop for visitors to experience.

Walk a mile in his shoes

Walking through the grounds of the Clos Lucé that the inventor used to cross is like a tour of Da Vinci’s genius. He had tremendous knowledge in mathematics, botany, astronomy, and flight, as visitors can experience by interacting with full scale recreations of his inventions, strewn throughout the park.

Ever since his childhood in Tuscany, Leonardo da Vinci had observed birds with great fascination and curiosity. Later, while working as an engineer in Florence, Milan, Rome, and eventually Amboise, he continued to explore his passion by analyzing, drawing, and studying the flight technics of flying animals, both large and small.

In his notebooks and scientific journals, the dream of flying becomes a possibility with his many drawings, sketches, and studies on potential flying machines: an aerial screw, an ornithopter, a flying wing, a parachute, a glider, and more.

This year, the Château du Clos Lucé is offering an exploration of Da Vinci’s favorite subject, one that, over centuries, has remained an object of fascination and innovation: the discovery of human flight. Taking his sketched possibility of flight into a 3-D reality, you can explore the genius of Da Vinci through evening performances, a scenic outdoor walk, virtual and interactive animations, educational workshops, and tours. Read more on the website, or on the events page.

Want to visit the Chateau d’Amboise for free? Click on the image below to play a game and enter a raffle for a free ticket.