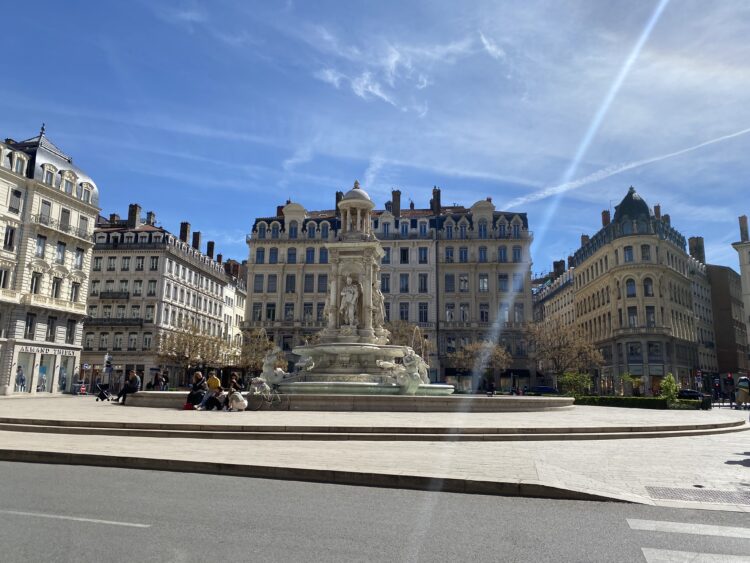 Stepping off the train in Lyon, you are immediately smacked in the face with Big City Energy. France’s gastronomic capital is teeming with folks of all stripes striving and thriving. You could spend a week or a lifetime in Lyon, but you might only have a weekend. So here’s how to see France’s third-largest city without getting lost in the shuffle. 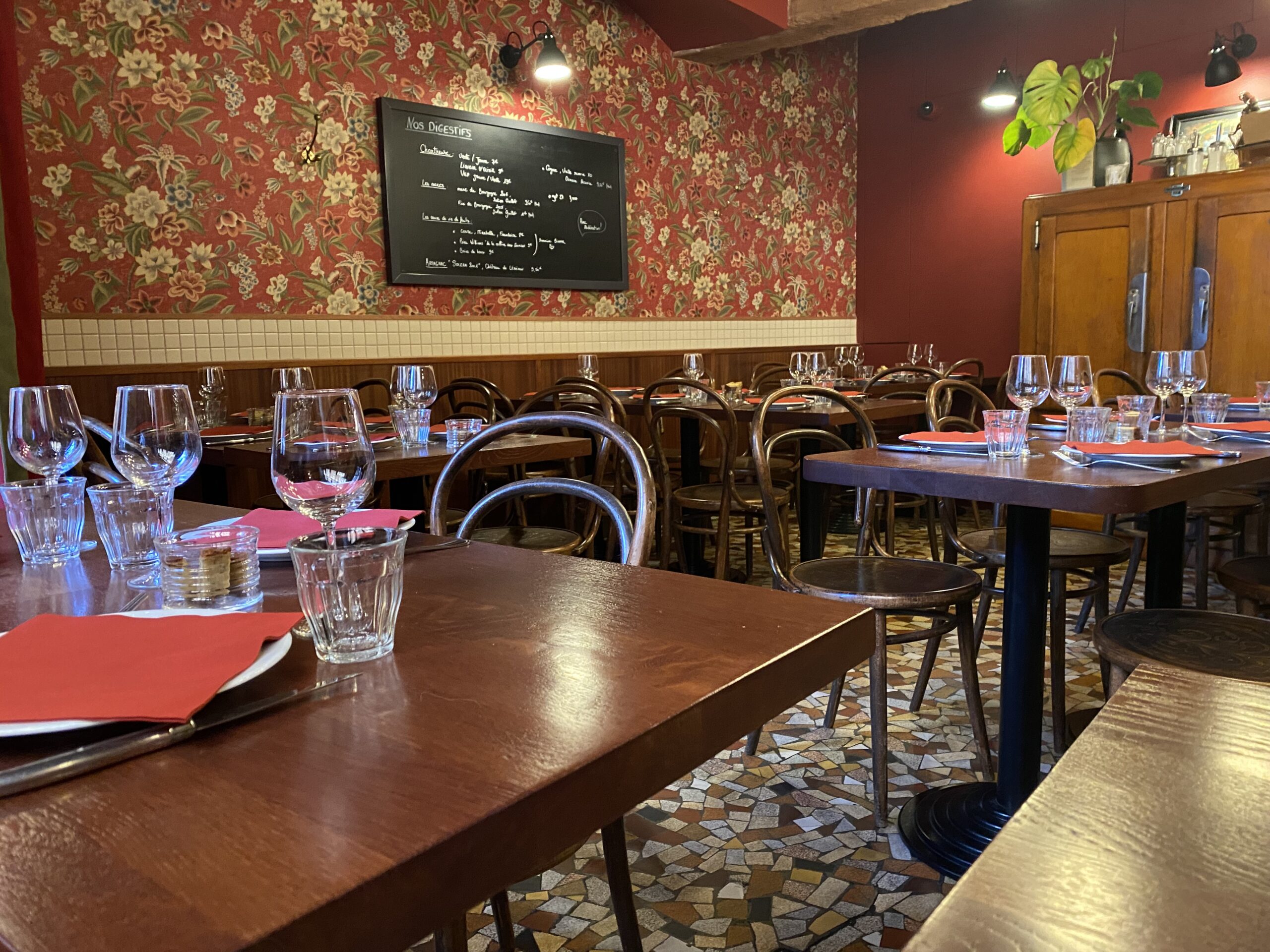 Lyon is, first and foremost, a food city. This metropolis of Michelin stars is filled with restaurants to satisfy all tastes. Make your reservations well in advance, because the best places fill up quickly. Start with dinner at a bouchon, a traditional Lyonnais restaurant that serves local delicacies at reasonable prices. They tend to be meat-heavy, and some items are not for the faint of heart, so you may be better off googling your options before ordering. Andouillette, for example, is a sausage made from pig intestines that you can find on a bouchon menu. But don’t be turned off—the chefs here are so good, you’ll hardly care what you’re eating.

Lyon’s nightlife is as diverse as its cuisine, and there’s a little something for everyone. Bars stay open until 3 or 4am, and clubs until 6, so night owls will fit in just fine here. 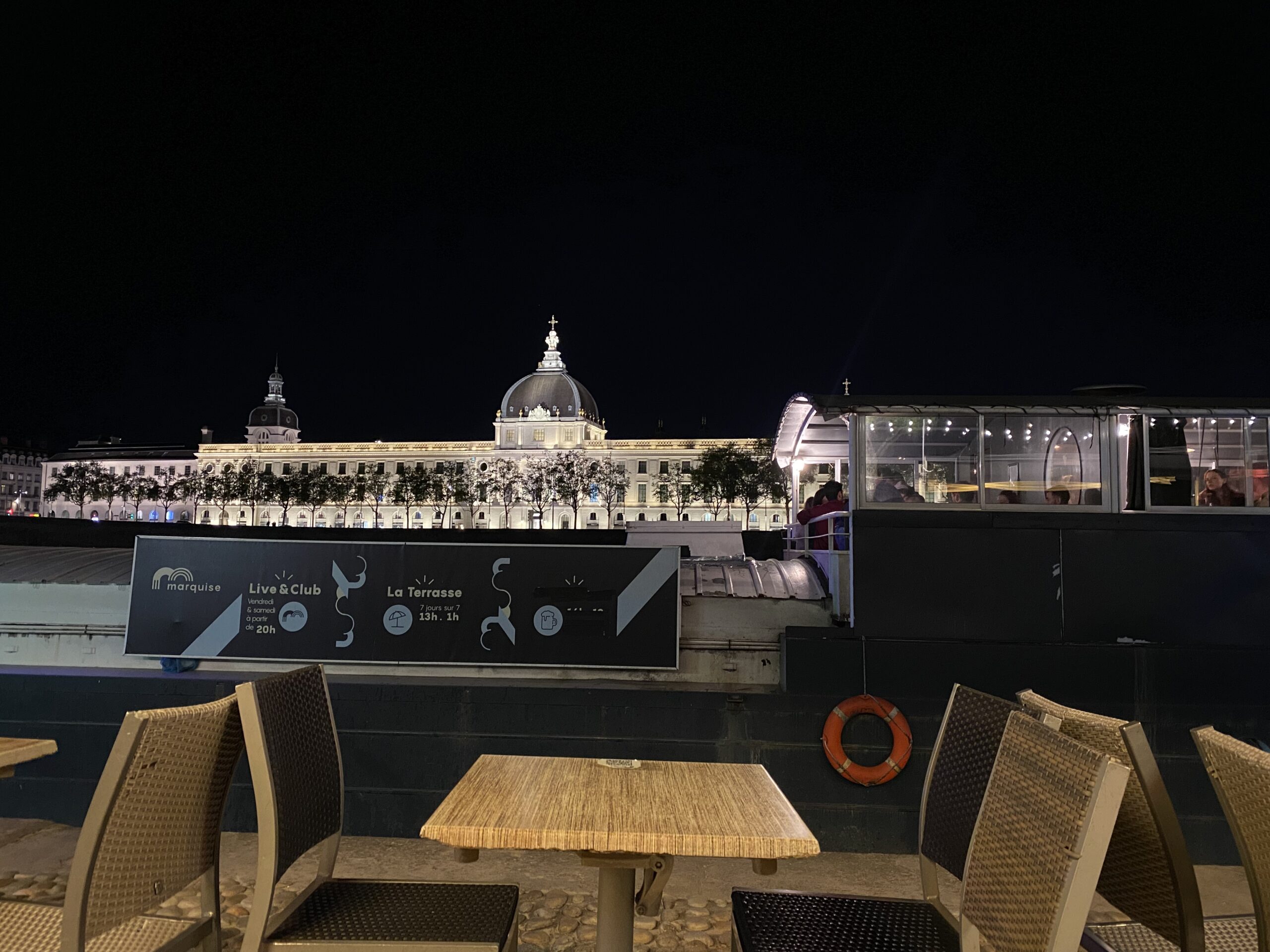 Fancy a party on a boat? Head to the bank of the Rhône River, where péniche boat bars are docked, each offering a different type of music. You can sit on the river bank terrace or on the boat to enjoy your drink, or head into the bowels of the barge for an underwater dance floor. Enjoy the porthole views of Lyon at night while you dance to reggaeton at La Marquise, or hip hop at Le Sirius.

Step back in time at one of Lyon’s oldest bars, Look Bar, for something jazzy and intimate. Sneak upstairs and nestle into a velvet armchair with a cocktail while you peer past the chandelier and into the leather-cloaked bar below.

Want to take in some live music? Bec de Jazz is a legendary spot in the Croix-Rousse neighborhood, while Trokson and Technoir on the Presqu’île cater to rockier crowds. But keep your wits about you late at night in the city center, and avoid side streets full of rowdy partiers and patient pickpockets.

Wander the colorful streets of Vieux-Lyon for an unexpected architectural cityscape. While the “newer” Presqu’île has a more Parisian feel thanks to its 19th century Haussmannian buildings, Vieux-Lyon transports you to Tuscany. During the Renaissance, Italian merchants flocked to Lyon, recreating their pink, orange, and yellow-toned villas in the middle of France. The neighborhood is now marked by its traboules, or hidden passageways. Some are well-known, and can be found on maps like this one. But when in doubt in Vieux-Lyon, just try walking through any open door to see what secrets it might hold. When you’re tired of wandering, forgo the touristy restaurants on Place Saint-Jean in favor of a taste of everything at the Food Traboule. 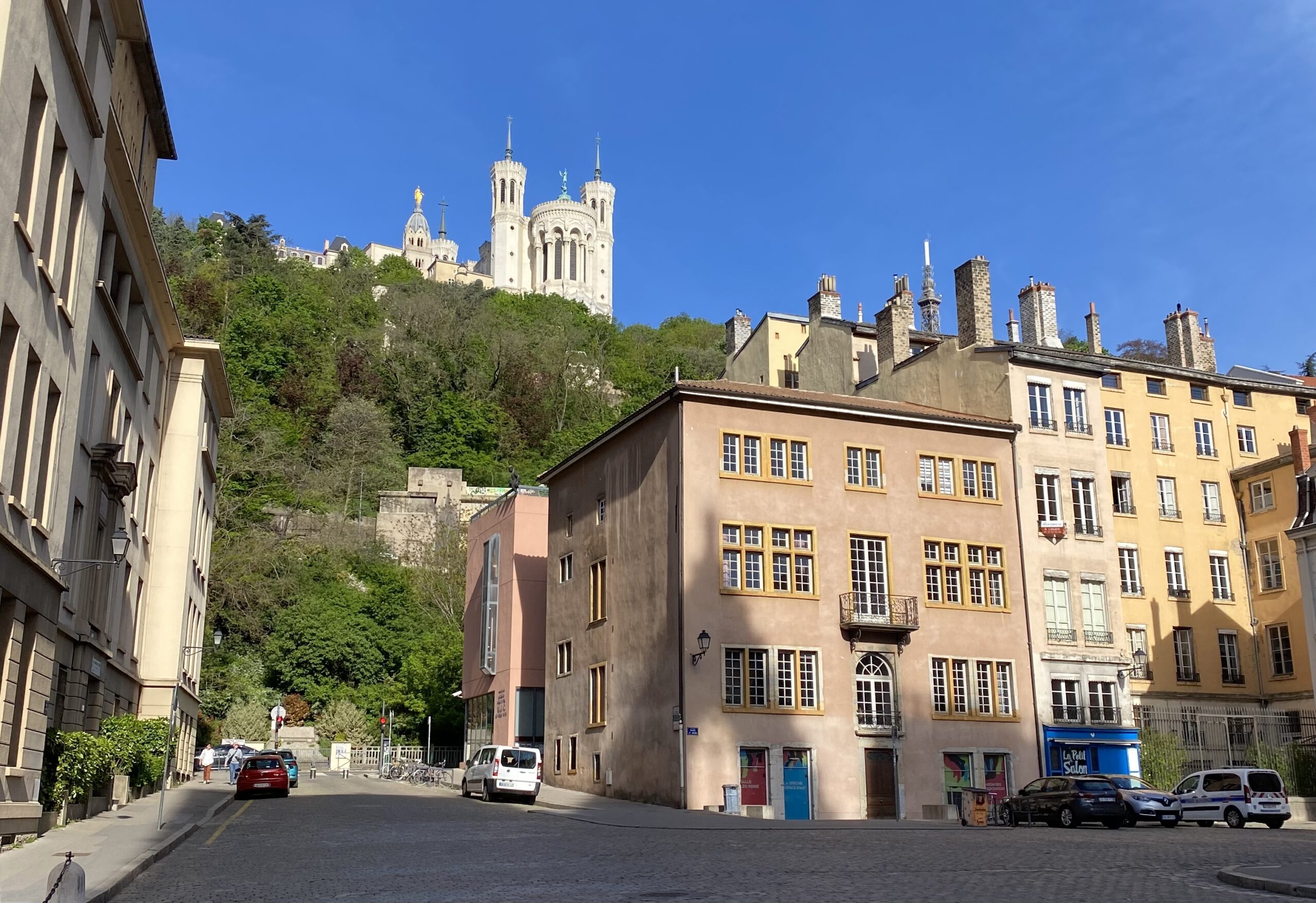 After lunch, take a trip up to Fourvière, Lyon’s historic hilltop basilica in Vieux-Lyon. You can take in the whole city from the top, and it’s a popular sunset destination. But be warned: it can get quite crowded. The guide books will direct you to take the historic funicular to the top of the hill, but you should opt to walk instead if possible. The journey is steep, but worth it. (The funicular ride goes through a dark tunnel, so the ride up isn’t exactly picturesque, and you have to wait for a while with other tourists before cramming, sardine-like, into the cars.)

If you’ve still got some fight in you before your dinner reservation, spend some time in the Croix-Rousse, the historic silk working district of Lyon. Visit the Maison des Canuts (the silk workers’ museum) or check out some street art. Picking up a scarf at one of the silk shops still found in this boho quartier is a great option when shopping for friends or relatives with high souvenir expectations. 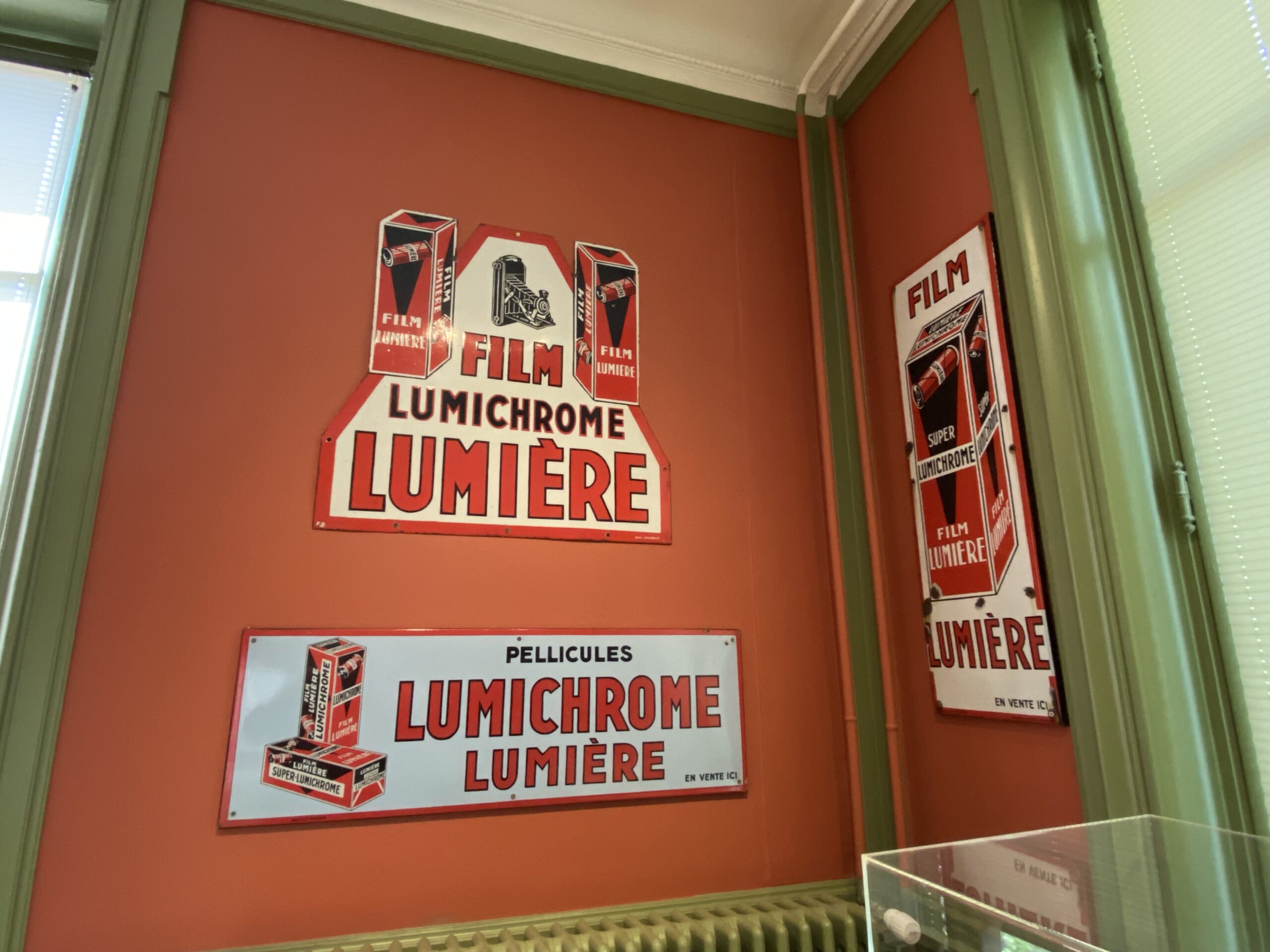 Film buffs can take advantage of Lyon’s reputation as the “birthplace of cinema” by visiting the Institut Lumière. This museum, housed in the Beaux Arts mansion of the Lumière Brothers, is devoted to the early days of film, the invention of the cinematograph, and the technical feats that would one day make your favorite Marvel movie possible. Even if you’re not a film geek, you’ll get a kick out of the collection of 50-second movies from the turn of the century (though keeping an eye on cultural standards of the time would be wise).

Prefer to be outside? Head to the Tête d’Or, a sprawling park with a free zoo and botanic garden. Bask in the sun or sneak through a hidden underwater passage to get to the lake’s Memorial Island.

Once you’re done sunning yourself or geeking out over vintage film tech, grab a sweet snack on the way to your train home. Lyon is famous for its pink pralines, which are often used for praline tart or praline brioche. Try this local specialty at Boutique Pralus Lyon in Vieux-Lyon or on the Presqu’île.