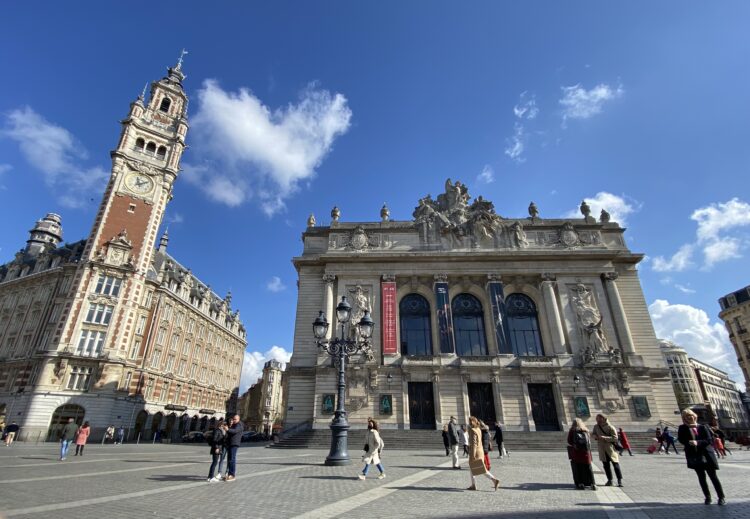 48 Hours in France: How to Spend a Weekend in Lille, the Flemish City

Despite being barely an hour from Paris by train, the northern French city of Lille doesn’t get the same kind of tourist treatment as French cities like Strasbourg or Nice. But this small, spunky city is well worth a visit if you’re in Paris and looking for a quick and easy weekend getaway.

Lille is located in the Flemish region of France, Flandres, so close to the Belgian border that you can bike there in under an hour if you have the inclination. The Flemish (or “Belgian Dutch”) heritage is distinctive, and despite the proximity to France’s capital, being in Lille feels almost like being in another country. Signs are likely to be written in both French and Dutch, the architecture is more Hanseatic than Haussmannian, and you can nix the wine in favor of local beer. Even the local attitude is different, peppered with a sense of humor the French refer to as autodérision (or “self-deprecating”). The Lillois tend to take life a little less seriously than their southern counterparts, but that doesn’t mean they don’t enjoy it.

You’re likely to arrive by train, which means that you’ll get into one of Lille’s two major stations, Lille Flandres, or Lille Europe. Don’t be confused, because these two hubs are across from one another, but not connected, about a five-minute walk apart. They’ll toss you out right into the center of the old city, Vieux-Lille, which is lively and charming, full of historic buildings and cobblestoned streets. Spend some time exploring while you build up an appetite for dinner. 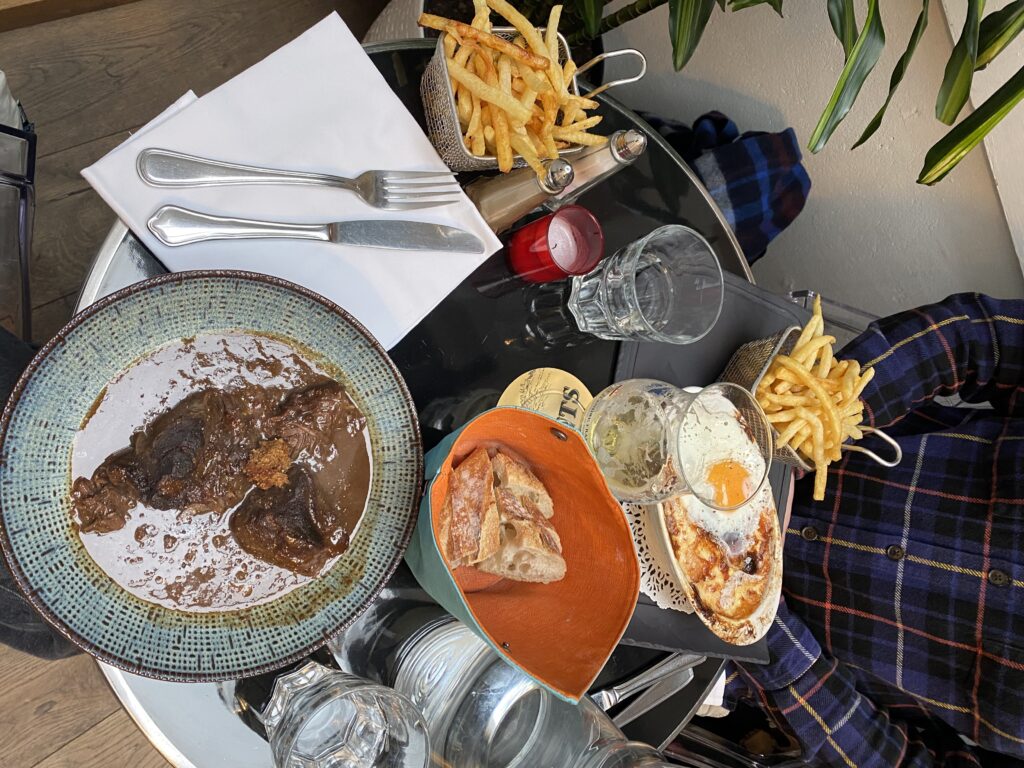 For traditional Flemish food, you’ll need to find an Estaminet, a type of local restaurant that serves hearty dishes meant to fill the belly during a long winter. Several of these can be found on rue de Gand, like Estaminet T’Rijsel or Les P’tiots Bouch’ard. Carbonnade is a popular dish, a beef stew made with ale and usually served with bits of gingerbread in it. Another is “le welsh,” which has nothing to do with Wales, but is essentially a bowl of hot cheddar cheese with bread, ham, and mustard mixed in, with an egg served on top. And one great thing about Lille, is that everything is served with a side of fries. And we mean, everything. Moules frites is another classic, and the Flemish even have a holiday for moules frites, called Braderie, which takes place the first Saturday of September, when everyone in town contributes to one giant stoop sale and feasts on mussels and beer.

Beer is big in Lille, and more common than wine in most bars. But be careful: there’s a big drinking culture in the North of France, and beers tend to be higher in alcohol content than in other places, around 8%. So be sure to check what you’re drinking before you order another round for the table!

For breakfast, stop into Pâtisserie Méert, just a short walk from the train station in Vieux-Lille, for a gaufre, or waffle. You might be familiar with the “Belgian waffle,” which can be found throughout Flandres, but the ones made at Méert are of a particular distinction. They are very thin, and filled with a variety of flavors, from Madagascan vanilla to Speculoos to pistachio. And they’re surprisingly rich, especially the humble vanilla. You can grab the waffles to go, but it’s worth it to make a reservation to sit at their cafe, which is high-ceilinged and ornately decorated. You’ll feel transported back to 1677, when the house was founded.

While most of Lille is accessible by one of the city’s two metro lines, there are a few trips worth making outside the city. One is LaM, the Lille Métropole Musée d’art Moderne. You’ll have to take the metro and then a bus to get there; when you arrive you will be in for a treat: the modern art museum is surrounded by a sculpture garden in the middle of a lovely patch of countryside. The permanent collection is dedicated to modern, particularly cubist, artworks, as well as Art Brut. The museum also houses rotating collections of contemporary art. 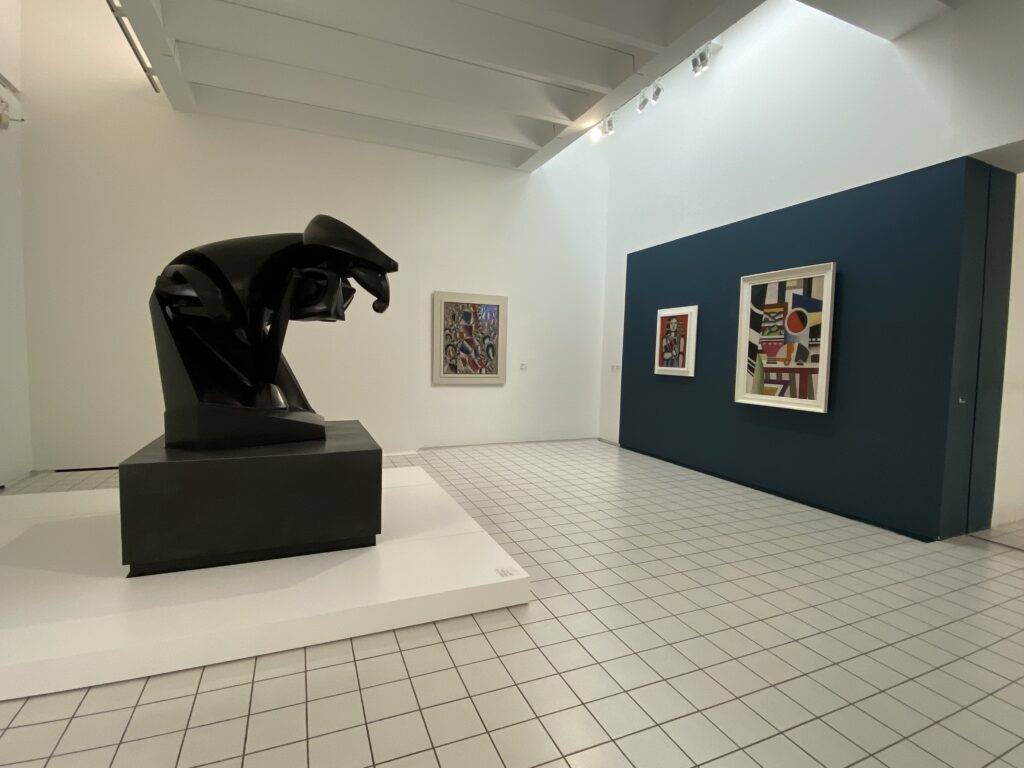 If you don’t want to trek outside the city, you can always go to the Palais des Beaux Arts, which is housed in a stunning Napoleonic building across from the République. It’s one of the largest art museums in France, with extensive collections of medieval and Renaissance art, antiquities, decorative arts, a statue garden, and even a hall of Impressionist paintings.

One of the best places to go out while in town is the Gare Saint Sauveur. It’s not actually a train station, as the name would imply, but a cultural center that houses art exhibitions, music performances, and even a bazaar. Check their Facebook page to see what is currently on the program, and stop by “St. So” for whatever kind of event tickles your fancy, from swing dancing to DJ sets. 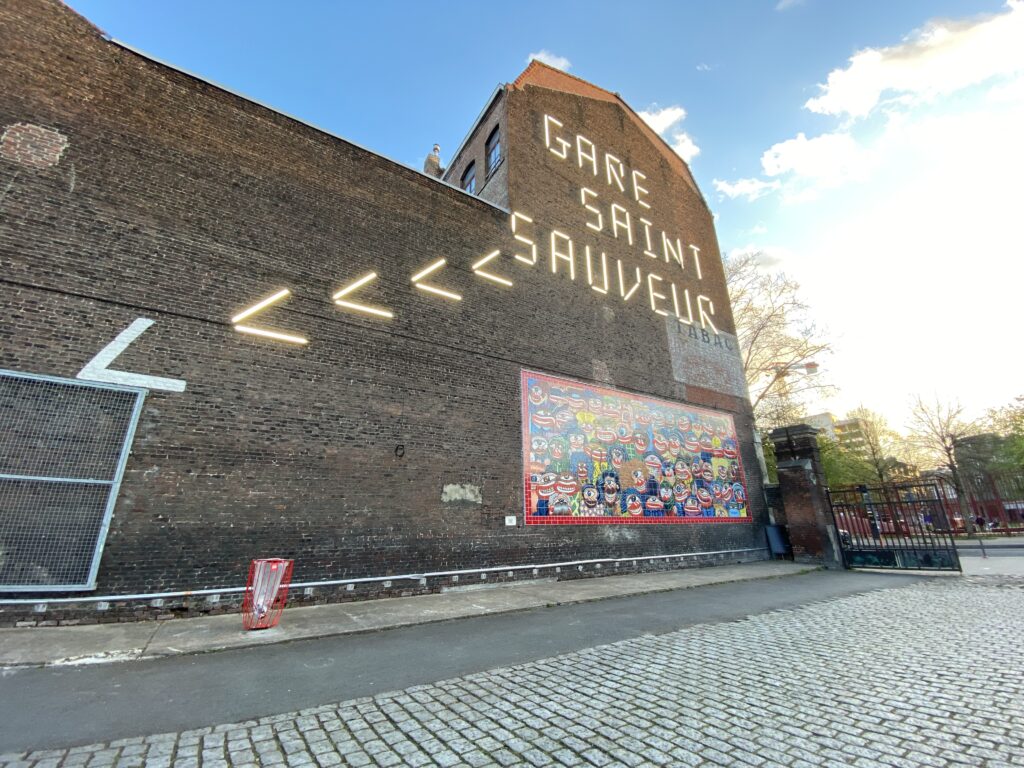 Sunday in Lille means one thing: the Marché de Wazemmes. This enormous market is the place to go for produce, clothing, and just about anything else you can think of. It can be incredibly busy, so be prepared to elbow your way through the crowds. 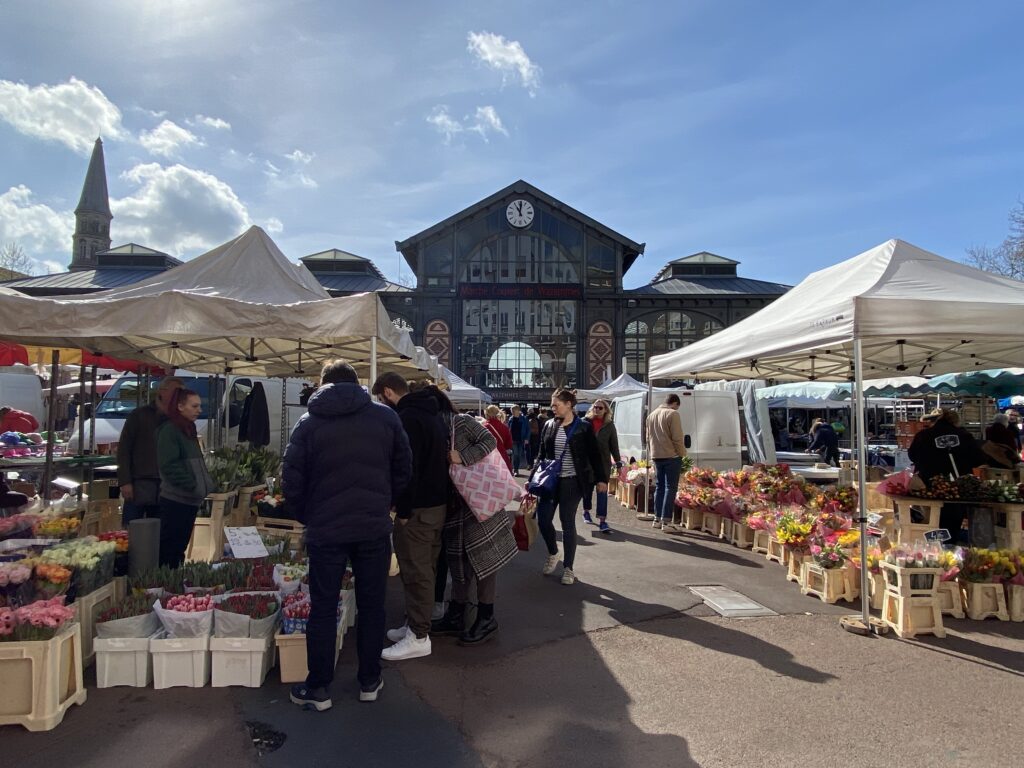 Every city in France has a must-eat cheese, and in Lille it’s Maroilles. The cheese is famously stinky, but don’t be afraid; the taste is much milder than the pungent odor would imply. Pick some up while you’re at the market to spread on a baguette and go!

Once you’ve done your shopping, if you’re looking to head off a hangover from Saturday night, get a beer at Au Cheval Blanc, just a block off the market. This unassuming bar is infamous among locals, and the live music they offer on Sunday afternoons tends to draw a raucous crowd. A beer at 11am is standard practice at Wazemmes, so you can imagine how things might start to look by the time the band comes on at 1:30pm.

Lille is home to one of the last remaining citadels in France, which is now used as a military base. You can’t enter within the five-pointed star of the Citadelle’s high stone walls, but surrounding the base is an enormous park with a zoo, perfect for a lazy afternoon.

On your way back home, steal a sweet moment at Aux Merveilleux de Fred. The original is near the Marché de Wazemmes, but there’s one in the Lille-Flandres train station as well. This famous local pâtisserie is known for one thing: Le Merveilleux, a delicate meringue heaped with thick cream and other toppings. It’s best eaten within the hour, as the cream will begin to deflate if left to sit out. Perfect for a snack for the train ride home.