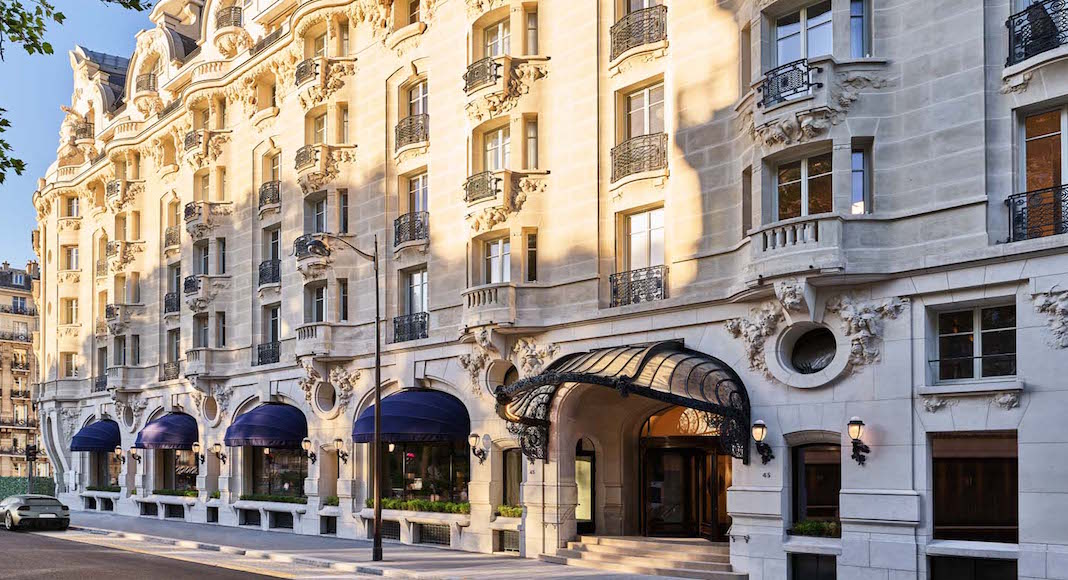 What happens when shopaholics don’t just live around the corner from their fruit of indulgence, Le Bon Marche? The department store builds them a hotel next door.

It’s no joke. The year was 1910 and said hotel was Hôtel Lutetia. It was the Art Nouveau helm of Left Bank bourgeoisie and art scene with the peculiar flair of Saint-Germain-des-Prés. It was the only hotel on Rive Gauche — the only grand hotel that is!

Four years ago, after more than a century of jazz parties, notable guests, wars, and everything in between, the hotel retired for a long-needed $234 million makeover only to reopen its doors again earlier this month.

Somehow, one of Paris’ most glamorous hotels always stood in the shadows of the swanky Right Bank’s Ritz, Le Meurice, Plaza Athenée… Perhaps on the Left Bank it was almost unfashionable to show glitz and blitz? But this is exactly what made it all the more interesting because behind the bubbly, curvy structure so characteristic to art-nouveau was a whole microcosm where arts mingled with politics, influential foreigners and locals just as well.

The building was originally built on the remains of an abbey and its gardens nearby Le Bon Marche. (No wonder it became an almost religious institutions for the century’s elite and “it” mesdames et monsieurs.) It was totally ahead of its time, as the construction involved lots of steel and glass. The facade was chantilly-colored with stone balconies adorned in crawling structures, balusters, and characters from Ancient Greek tales. Imagine, Lutetia was almost a futuristic capsule of its day. There was even hot water, telephones and air-conditioning, oh my!

The luxury destination did not even need a public relations team — a high-profile crowd flocked to its bars and suites, and never too far from one of the hotel’s private parties where Josephine Baker or Juliette Greco would perform.

French writer André Gide was known to lunch there everyday and James Joyce even wrote a large chuck of  “Ulysses” within the hotel walls. Albert Camus, Pablo Picasso, and Henri Matisse were all regulars on the property.

Even French president Charles de Gaulle and his wife spent their wedding night there, that is, before it was requisitioned by Nazi forces during World War II and housed their officers. Following the liberation of Paris, under the orders of General de Gaulle, Lutetia hosted victims of Nazi rule.

With time, it boasted the names Catherine Deneuve, Gerard Depardieu, David Lynch, Isabella Rossellini, Brad Pitt and countless others in its guestbook. But the old walls of the hotel began giving in and the aesthetic lacked upkeep, and so one of the most influential hotels of the 20th century was temporarily forgotten.

As the doors once again opened to its guests this year, the hotel has undergone serious plastic surgery. The 233 room count turned to 184 with each room now possessing a marble bathtub. There is also a spa and a pool within the hotel too. But the said je ne sais quoi of the hotel remains and we know where it actually resides: in the 280-pieces art collection, still on display in the still frescoed lobby.

The hotel also honored it’s special guest with her own bar: Bar Josephine. The restaurant, Lutetia Brasserie, a neighborhood favorite, will now be headed by three-Michelin-starred chef Gerald Passedat of Le Petit Nice (in Marseille), And of course, there will still be the salon Le Saint Germain and the L’Orangerie for coffee and courtyard delights.

And so, just like that, Saint-Germain-de-Prés got its leading star back.