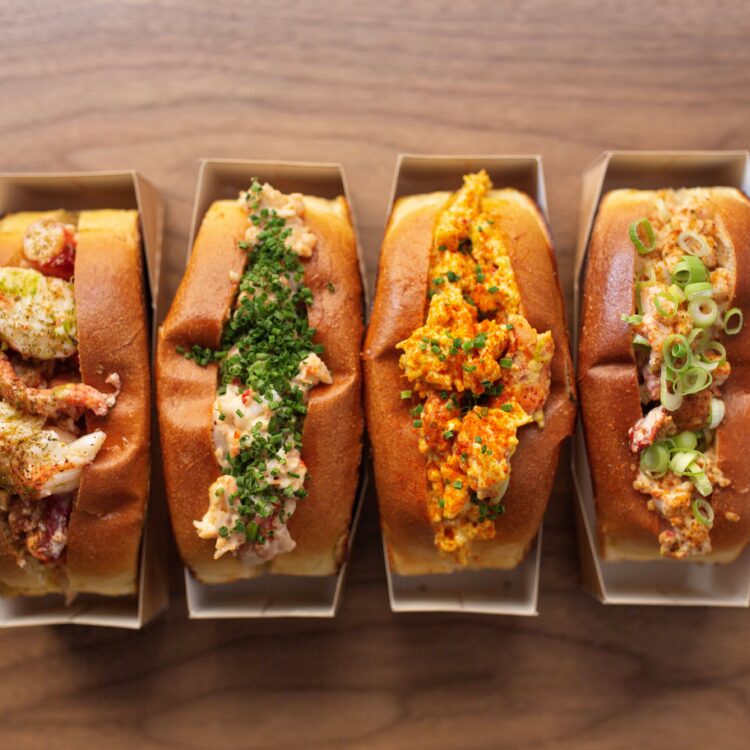 One of the World’s Best Lobster Rolls is in…Paris?!

If asked to name great French sandwiches, your short list would very likely include contenders such as, pan bagnat, saucisson sec (salami) on baguette, or even a tartine or croque monsieur (if we were to stretch the definition of sandwich a bit). Chances are that a Lower East Side inspired pastrami on rye or a lobster roll (more at home in Maine than Le Marais) would not come to mind. Well, it so happens that Chef-Restaurateur Moïse Sfez’s passion for U.S. gourmet street food and culture has turned these two iconic American sandwiches into some of the most sought after and highly acclaimed food finds in Paris, or maybe even France. 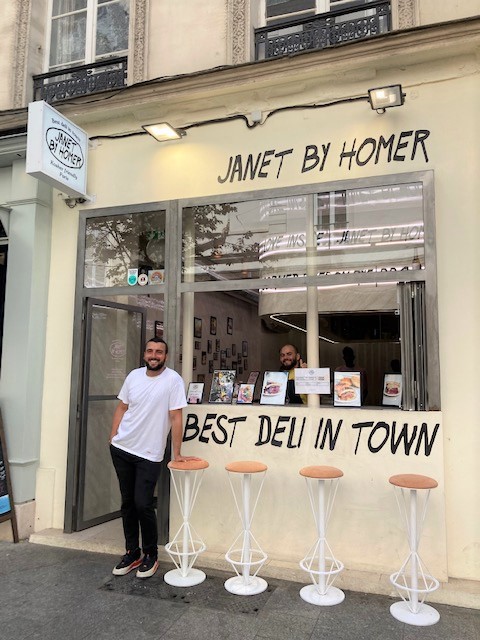 I recently headed down to meet Sfez at the flagship of his newest concept, Janet by Homer, which opened January of 2022 on Rue Rambuteau in Paris’s Marais district (4eme arrondissement). Among the things that struck me when I arrived at Janet were a sliver of a space with counter seating only and the clear rapture of every single patron enjoying their food.

I tucked into my delicious hot pastrami – boiled, smoked and cured for ten days with Sfez’s own spice recipe. Instead of serving it on classic rye bread, Sfez took eight months to develop a rye brioche bread, giving a decidedly French twist to this N.Y.C.-by-way-of Eastern Europe Jewish gem of a sandwich. As I ate, Moïse told me about his obsession with American sandwiches which led to his growing success in France.

Ever since his teens, Sfez told me, “I loved the American culture, mentality and food. I’ve tried to go to the U.S. every year to discover new cities, eating my way around each one.” On one particular family trip to N.Y.C. fifteen years ago, after hearing a lot about lobster rolls, he was determined to finally taste one. “I didn’t see any all week, and on the last day, driving through Brooklyn to the airport, all of a sudden, I saw a lobster roll shack from the taxi and I shouted for the driver to stop!” With the taxi waiting and the meter running, along with his father and younger brother, they took their time savoring lobster rolls. “I knew right then that I had to do something based on lobster rolls. It was like, WOW! I loved it!”

This twenty-seven-year-old Parisian enfant terrible of American sandwiches grew up in a family whose Tunisian Jewish heritage was reflected in boisterous and robust family meals, he told me. The family home in Paris was often filled with the heady aromas of meals prepared by his mother and grandmother, both of whom he credits with instilling a passion for cooking and world cuisines in him.

After high school,  Sfez enrolled in France’s prestigious Vatel Hospitality school where he quickly excelled. There, his culinary and entrepreneurial talents were recognized. His first apprenticeship was at the just opened Peninsula Hotel in Paris, followed by a year in London under Alain Ducasse at the Dorchester.

“I kept the lobster roll concept in my mind,”  he said. He knew that his lobster rolls would hinge on “using home-made buttered brioche buns and a mountain of Japanese inspired lime-zest Mayonnaise, with celery salt.” And that’s just what he started serving at pop-up at events while he was still in his last year at Vatel, and that is how the “Homer Lobster” concept began. In 2017, during his last year in hospitality school, he opened a corner kiosk in the BHV, Paris’ premiere housewares department store, and, four months later, launched his first Homer Lobster eatery on the Rue Rambuteau. Sfez says, “It was not like any taste we have in Paris.” 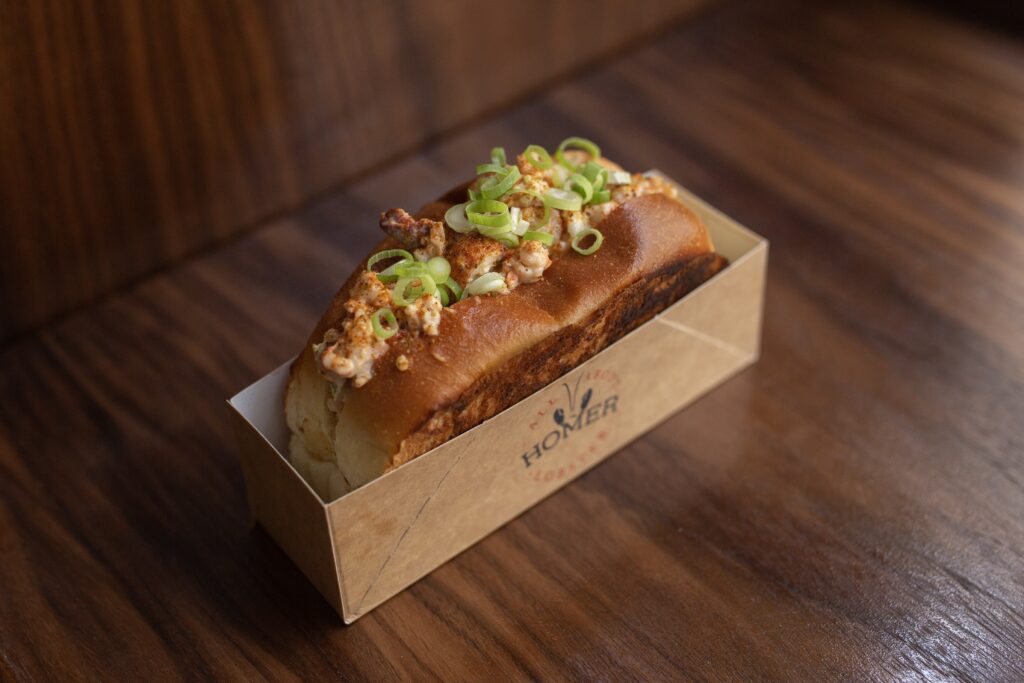 Not long after, Homer Lobster was the first street food concept invited to collaborate with the prestigious Peninsula Hotel  and was subsequently offered a concession stand in the Royal Monceau Hotel. More recently, he garnered an outlet in the Carlton Hotel in Cannes. In 2018,  Homer was awarded the Celebrity Favorite prize in Maine’s Down East Magazine’s World’s Best Lobster Roll competition.

Having successfully rolled out the lobster roll concept, Moïse told me that he “wanted to expand and try another new concept, to offer a more accessible option other than his 18 Euro lobster roll, and for people who don’t eat seafood.” So, he set out to identify another iconic street food concept from the U.S. On his travels, he canvassed each city he visited to seek out the best delis and try their corned beef and pastrami sandwiches.

His second “aha” moment occurred while being transported by the symphony of tastes of pastrami sandwich at Katz’s Deli in lower Manhattan. He realized this was another American taste experience which – like the lobster roll – was unlike anything in France. “Here we have a different approach to pastrami, we think of it like a charcuterie, it’s really dry, sliced thin, served cold, and in the U.S. when you eat pastrami it’s hot and juicy.” And that’s the experience he wanted to create for customers in Paris. After three years of recipe development, branding, searching for the right location he finally launched Janet by Homer in January, 2022.

Unlike a typical Jewish Deli, he doesn’t use classic rye bread, but has adapted his popular brioche recipe (from Homer Lobster) and created a rye brioche which took 8 months to perfect. He also serves a rueben sandwich which he calls the “Langers,” in homage to the famous LA deli, of the same name, Langer’s, that serves a version of this same classic sandwich. It’s served with a choice of a homemade coleslaw (savory rather than sweet) or Alsatian sauerkraut, a nod to choucroute, the iconic French shredded cabbage pickled in a white wine brine. 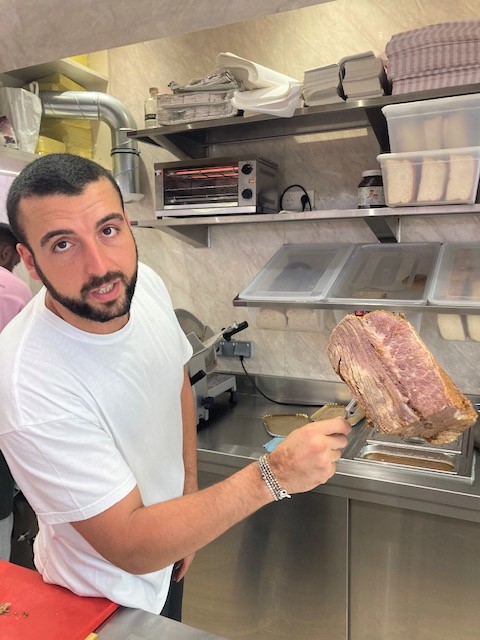 “So, who’s Janet?” I asked. In the tradition of  American Jewish delis that have kept the names of their founders, Moïse chose to name his restaurant after his grandmother (who continues to enjoy the sandwiches and is very proud of her accomplished and talented grandson.)

Not one to sit on his laurels, Moïse is expanding the brand. As of this month he’s offering packaged and bottled retail products such as meats, garnishes, condiments, pickles and more, available at his flagship deli at 13 Rue Rambuteau. In addition, he’s trying out a hot dog concept, served with N.Y.C. style or Alsatian choucroute toppings and served on a brioche bun, which he plans to spin off into a new brand.

And, as if all that weren’t keeping Moïse busy enough, he’s working on a book about authentic American street food, a sort of a foodie-anthropological-travel-book with some recipes, for which he’ll be journeying to his favorite haunts in the U.S. Turns out it was such a good idea some television producers have signed on to send a crew along to film his taste trek for a cable series. 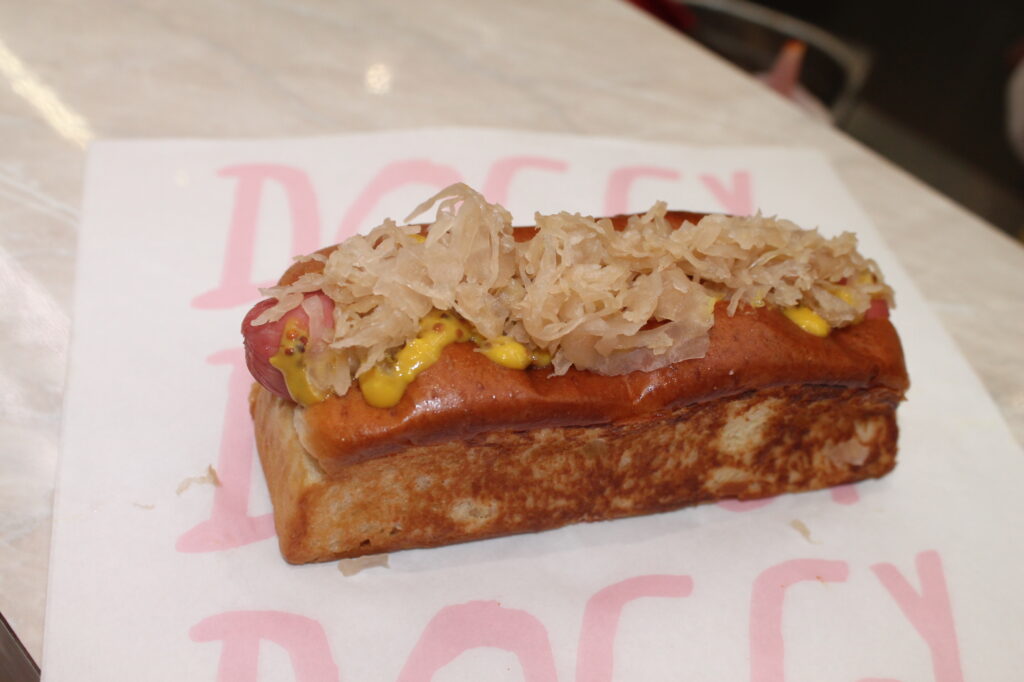 Moïse Sfez is not only an indefatigable food entrepreneur, he’s also a gracious and ever-present host.  So, Francophiles looking for an over-the-top sandwich experience in Paris, while enjoying a fascinating chat with Parisian Americanophile, I recommend putting either or both, Homer’s Lobster and Janet by Homer, on your bucket list.

Philip Ruskin is an External Lecturer (ESSEC Bus. School), Consultant (food & travel marketing), writer, drummer and regular contributor to Frenchly.  He loves to bike around his adopted hometown of Paris. Find him here, on Instagram.