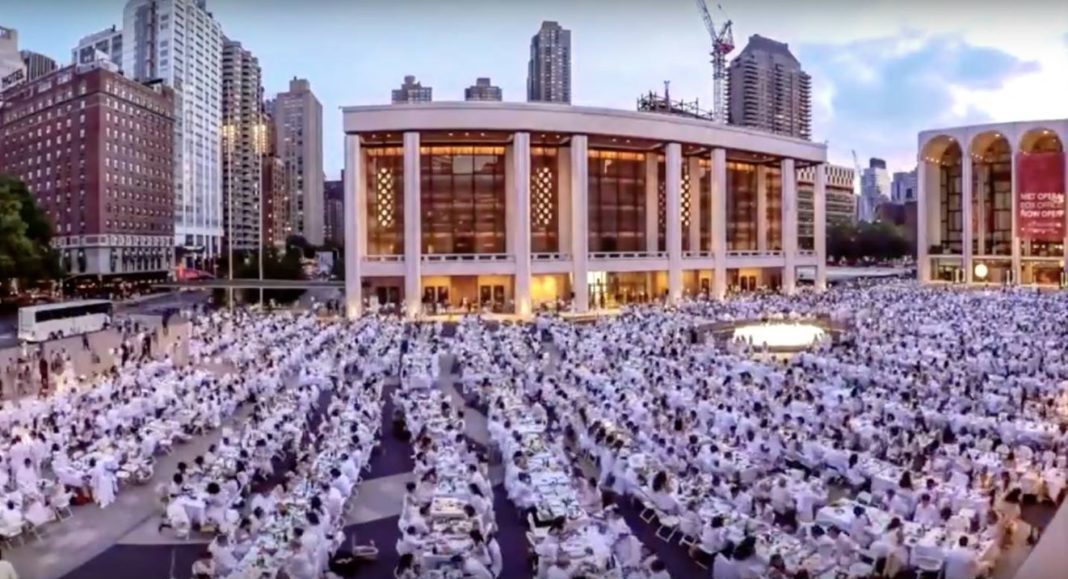 “At the beginning, it was a simple picnic amongst friends in the Bois de Boulogne,” reminisced François Pasquier. “It could have been one of those meals amongst friends that goes badly, but since it went well, we did it again the next year.”

In 1988, Pasquier organized the first of many Dîner en Blanc on the outskirts of Paris. At the time, he had no goals other than to host a nice soirée among friends, all dressed in white so they’d be able to find each other amongst the pedestrians walking the Bois de Boulogne. In less than three decades, the pop-up dinner party concept has expanded into 79 cities around the world, including New York, which hosted its seventh Dîner en Blanc on August 22nd on the steps of Lincoln Center.

As tradition dictates, the location of the fête is revealed only an hour before beginning at 7:30pm, when guests twirl their white napkins in the air to signal the start. After having assembled at the 26 meeting points throughout the city, the 5,000 participants converged on the terrace of Lincoln Center to set up their tables and chairs, organize their DIY décor, and lay out their picnics.

Even though Dîner en Blanc is no longer attended solely by the original crew of ephemeral partygoers, the concept itself has remained intact. “For every edition, we’ve hosted a joyous event, classic and elegant, which forms a real connection between people,” says Gilles Amsallem, co-organizer of the New York edition of Dîner en Blanc.

Though attending the dîner is chic and prestigious, it’s more than that, says founder Pasquier: “At its core is the elegance of the heart, which translates into an elegance in clothing. Its uniformity is a manner of saying, ‘we are all equal.‘”

“The effort that people made to dress, set their tables and create decorations is incredible,” saidAshley, an American attending her first Dîner en blanc. “But what I enjoy the most is the diversity. You have so many people of all ages and all backgrounds enjoying together this beautiful night.”

From the beginning of the event to the end, spontaneity is key. “It’s a very french style of organization, which unsettles many Americans,” muses Pasquier. “In any event, Dîner en Blanc is a success because its original spirit can be reproduced everywhere: we’re among friends, and surely that’s the most important thing.”