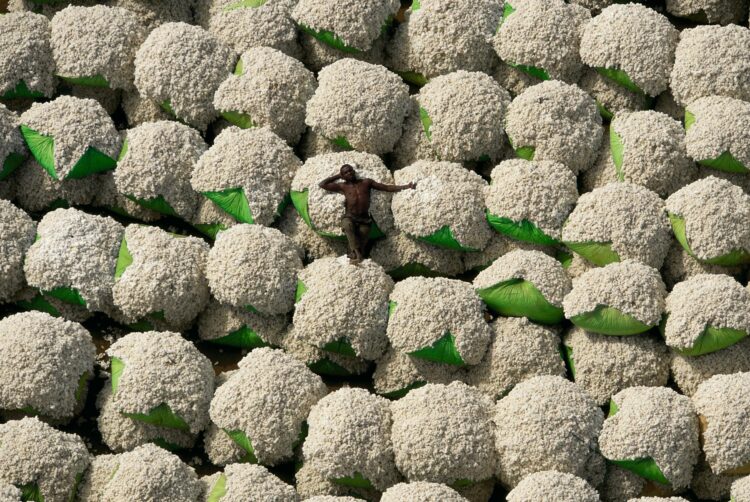 Some people who achieve greatness and fame are driven by a single passionate goal from an early age, like environmental activist Greta Thunberg who realized her mission to change the world before she was old enough to drive. Others take a path with twists and turns, master many things until they discover their true purpose along the way. Yann Arthus-Bertrand, one of the world’s most consequential environmentalists, is just such a person. In fact, you might call him an “accidental activist,” who went from B-film actor to wildlife photographer to filmmaker and, finally, environmental activist.

Yann Arthus-Bertrand invited me to join him for coffee and a chat (which I have translated from French) at his Good Planet Foundation, which is housed in a chateau in the Bois de Boulogne. It was a beautiful early spring day and I opted to take the twenty-minute bike ride from my apartment.  I was greeted at the foot of the chateau’s stairs by the strikingly handsome Arthus-Bertrand, who, at seventy-five, remains totally committed to battling the increasingly urgent and daunting perils of climate change. As he extended his hand, he explained the meeting he was coming from was about the fifty hectares he has purchased for his latest experiment, a project to “re-wild” the land. It was instantly clear that he continues to take on challenges with earnestness and passion.

In his restless youth, the scion of the famous Arthus-Bertrand Paris jewelry shops (which designed the Legion d’Honneur medal), was on the fast track to nowhere. As he told it, “I was this kid who did cinema, but above all, this kid was completely lost, between 16 and 20. I’d left home, I hung out on the streets, I could have very easily ended up in jail.” His first life changing turn, he said, was when he fell in love with his best friend’s mother, who was twenty-six years his senior. “She had faith in me, I lived with her for almost 10 years, and through her I discovered that my passion was nature, especially animals,” and lions in particular. Arthus-Bertrand told me that he then discovered Jane Goodall’s book on chimpanzees, My Friends, the Wild Chimpanzees, and realized that he wanted to study everything he could about lions.

When his love affair with best friend’s mother ended, he met and married Anne (to whom he is still married) and set off for Kenya, where they spent the next three years following lion prides for a doctoral thesis he was writing. In order to support their studies, he decided to become a hot-air balloon pilot.  “That’s where I discovered aerial photography, which is something that has been very important in my life.  I realized how important it was for my studies of lions, to watch their interactions, feeding, relationship with the environment,” he shared.

Arthus-Bertrand went on to point out, “now, we all have aerial photographs on our iphones with Google Earth, but as you can imagine, in those days aerial photography was very, very new.” Floating above the Kenyan landscape, he was awe-struck by the beauty of the view from above. “It was completely different from the view from the ground, it was like being in a dream, to fly like a bird,” he recalled.

In 1981 Yann and Anne returned to France and published Lions, an instant best-seller, that turned him into an in-demand nature photographer, going on to shoot for Life, National Geographic, Paris Match, Figaro and many other French publications. He told me that he realized that it was “much more appealing to be a photographer, doing what I loved, than to spend my life as a scientist, and maybe never find the means to do what needed to be done [to make a difference].”

So I asked him what was the “aha” moment that got him involved in climate change? In 1992 he read about the Rio Conference (also known as Earth Summit) a pioneer event on global environmental issues. As we sipped coffee, after a brief pause in which he seemed to be reflecting, Arthus-Bertrand went on to explain, “that’s when I realized that I had work to do with regard to using aerial photography, seeing the earth from above. This work completely changed my life…I became an activist.”

The publication of Earth from Above  was a genre-changing collection of 200 staggeringly beautiful photographs, each of which lovingly rendered the global landscapes and cityscapes as works of art in a way that had never been done before. One of sixty books he would eventually publish, this one became a huge success, selling over 4 million copies to date, and setting a record for coffee table books.  “I suddenly became recognized, very well known,” he adds. 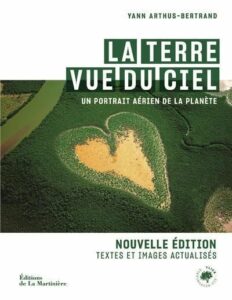 Despite his new fame, Arthus-Bertrand found himself unable to get a major museum or gallery to mount an exhibition of his photography.  What was the reason, I asked?  “Because [the photographs] were in color, because, as I was told, they weren’t of interest.” So, he decided to go ahead and mount an exhibition himself on the streets of Paris, with large blow ups of his photographs encased in plastic.  It was an unqualified success, and gave way to a new popular platform. “We invented street photo exhibitions. Now it is quite common to see, especially on park and monument fences.”  Two million people saw the exhibit, and it was subsequently mounted in multiple cities across the globe. The renown he garnered from the book led to the UN naming him an Ambassador for the Environment, and to his decision, in 2005, to create the Good Planet foundation, a bustling organization with dozens of dedicated employees, and hundreds of volunteers. Good Planet implements global environmental initiatives, studies, and educational programs, as well as events, exhibits, cooking classes and even outdoor concerts on the estate of the chateau where Good Planet has its offices, in Paris’ Bois de Boulogne.

As Arthus-Bertrand searched for new ways to educate people on world issues, it was natural for him to progress from photography to film. Arthus-Bertrand’s documentaries, Home, Legacy, Human, and then Woman received international attention and acclaim. Amazon Prime has just purchased the rights to Legacy, and he is currently in post-production with Immigrant, whose title reflects the latest global crises he is tackling.

Considering the critical state of the planet, I asked Arthus-Bertrand if he’s an optimist? “To be an optimist is someone who does not know how to see the world with your eyes wide open. With the enormity of the task we must be even more engaged,” he offered. But something must give him hope, I queried?  He replied that, “What gives me hope is to see how engaged everyone is here [at the foundation] and beyond.”

As he spoke, I kept hearing his faith in, and love for, people which seems to thread through Arthus-Bertrand’s body of work and thinking. “We  talk about carbon, about the environment, we talk about bees, about green kitchens. But it is ultimately all about humanism.”  After pausing to take a final sip of his coffee as we stood in the the garden, he added, “We don’t know exactly what we must do, but we are all involved, we all have a role; I as a photographer and director. But the chef, the  journalist, the architect, the taxi driver, each of us, in our own way, has a way to do something.  And part of my job is, through the media, like Frenchly, to make people aware we each have something very important to add.”

And although, in the middle of his eighth decade he continues to have much important work to add, he told me that he no longer travels internationally. As he put it, “I work in France now.  I love my country, we have an amazing landscape, the food is amazing, we have great people, the social laws are amazing.  I think we are living in a paradise.” I assured him that Frenchly readers share that same feeling.

Next time your travels bring you to his beloved France, I highly recommend making the time to visit Yann Arthus-Bertrand’s Good Planet Foundation to learn more about his work, how you can be involved, have a picnic or catch some cool live music.

Arthus-Bertrand invited me to include his email, [email protected], and promised he would answer any emails from Frenchly readers.

Images reproduced with permission from Yann Arthus-Bertrand, Earth from Above.