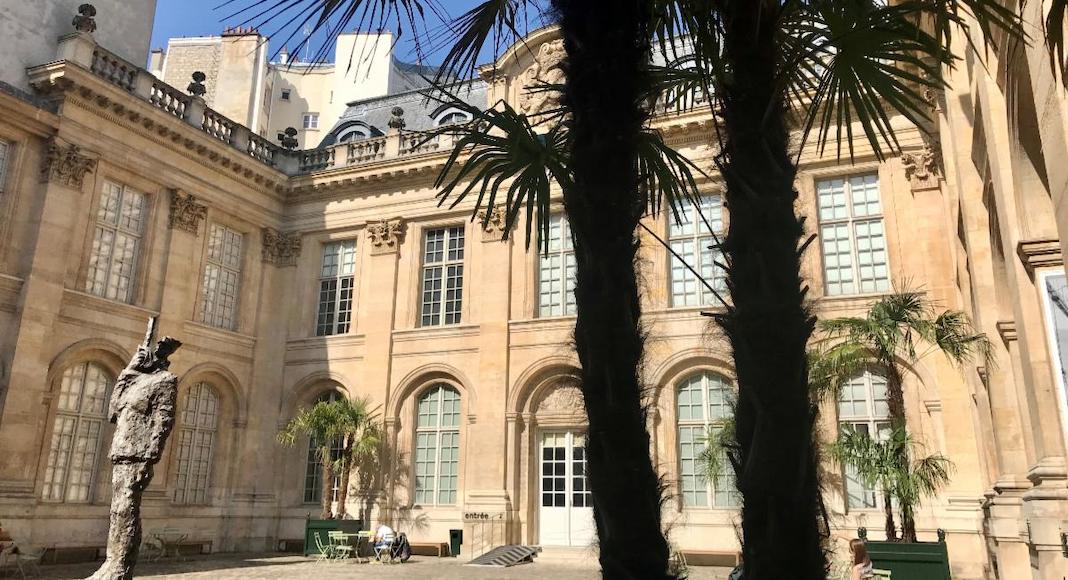 Paris’s Museum of Art and History of Judaism, mahJ, is back with a new exhibit on “The School of Paris”

Tucked away in a converted 17th century mansion Paris’s third arrondissement lies the Musée d’Art et d’Histoire du Judaïsme (Museum of Jewish Art and History), commonly referred to as mahJ. Located in the historically Jewish neighborhood of the Marais, mahJ is unique among museums dedicated to Jewish history, in that it is not primarily dedicated to history of the Holocaust (though Paris does have a Holocaust museum in the Marais, the Mémorial de la Shoah).

The central courtyard where visitors enter the museum has lived many lives. Originally a private home, the aristocrats who inhabited it were chased out during the French Revolution. It later became part of the bustling garment industry in the early 20th century, where you’d be as likely to hear Yiddish in the streets as you would to hear French. Unfortunately, much of the original signage was taken down when the building was restored in the 1960s, after which it served briefly as a mairie before becoming mahJ in 1998.

Instead, the museum takes a holistic approach to Jewish history, integrating it within French history in a way that encourages viewers to consider our collective history. In other words, it’s not just a museum for les juifs. With items ranging from 3rd century Roman oil lamps to contemporary pieces, mahJ covers a grand swath of history. The Introductory Gallery provides a poignant point of entry, with items like a papier mache “Relief of Jerusalem” made in 1892 in Odessa, a vision of the holy city created by people who had likely never seen it, painted to look like silver and gold by humble craftsmen in Russia’s shtetls. Fragmented medieval tombstones once torn down and found in the dug-up foundations of a Parisian bookstore offer a haunting tribute to members of the Jewish diaspora, twice buried and yet impossible to keep hidden.

Past the Introductory Gallery, the museum takes us through history chronologically, with an early section dedicated to medieval Jewish culture. Before 1394, Jews were expelled from France four times, and artworks and various ritual items from all over Europe and North Africa can trace the journeys they were forced to take. Many of these objects of Judaica show the assimilation and cultural exchange they experience, like a Medieval Hanukkah lamp with rosettes recalling Christian architecture and design, exactly what you’d expect from Jews living literally in the shadow of the Notre Dame.

Later sections include other quintessentially diasporic objects, such as a 19th century Sukkah Booth for the Feast of the Tabernacles from Austria/Germany, with images depicting both traditional images of Jerusalem blended with small Germanic villages. Precious garments are similarly mixed, like a Moroccan Berberisca (traditional Sephardic wedding dress) topped with a Spanish bolero.

The story returns to France with a section dedicated to the Dreyfus affair, including the long-lost military honors stripped from Alfred Dreyfus, gifted to the museum by his descendants. Moving forward a few decades, there are of course items connected to the 76,000 French-Jewish victims of the Holocaust, confiscated objects from deported families (a silver Torah Shield, a spice box, a Hanukkah lamp), humble household items not even valuable enough to melt.

The current temporary exhibit is Chagall, Modigliani, Soutine… Paris pour École, 1905-1940, on display from June 17 to October 31, 2021. The exhibition will showcase 130 works by Jewish artists who came to Paris in the early 20th century, as part of “the School of Paris.” According to the museum, “The artists, including Chagall, Soutine and Modigliani, came to Paris from across the world to create their art in a free and modern context, without the constraints present in their home countries.” Some, like Chagall, display Jewish influences in their works, while many of the others fully integrated into the avant-garde movement of the time.

But the mahJ is not just a history museum. It is also well-known for its contemporary art exhibits, containing works from artists like Christian Boltanski and Si Lewen. Their inner courtyard hosts frequent concerts and film screenings, and they have a 200-seat auditorium with events several times a week, including workshops and plenty of family-friendly activities. They offer walking tours of the Jewish Marais every other Sunday at 3pm from May to August. During lockdown, mahJ also began offering online tours, available the following dates:

The cost is 4€ per connection (several people can attend on one computer). These tours are also available for groups upon request (160€ for up to 30 people).