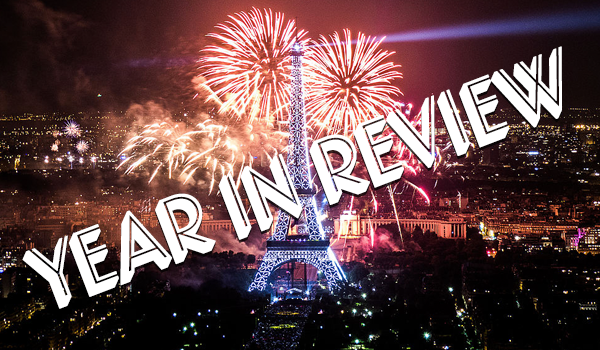 Year in Review: Our Best Posts from 2015

Charlie Hebdo: we wanted to know where to get copies in the U.S., why they think we’re “not so Charlie,” and what goes on behind the scenes at their temporary offices at Libération.

Our readers: they’re really into watching Netflix, with or without chill. The biggest battle was between the best French films available over the summer and right now as winter finally settles in, but last winter’s offerings also made it into our top posts.

By the way, the highest-grossing French films in the U.S. are all worth viewing, on Netflix or otherwise.

French expatriates: what’s in their luggage when they pass through U.S. customs? And what do they miss most about their native France? Somehow, racism that runs deeper than skin color didn’t make the list.

While our French compatriots were coming up with 45 things America does better than France, we were busy outlining the things the French do better than us.

One thing we left out: the French are amazing at ennui and malaise! But just as bad at dating in New York as Americans, and some were decamping for the greener pastures of dating back in France. So much for the myth of the perfect French woman!

Still, though, there were things Jon Stewart didn’t understand about the Fifth Republic, which is fine: Gad Elmaleh probably doesn’t know why he’s called the “French Ben Stiller,” either. Also: is he the French Ben Stiller if he’s performing in English now?

Fondue, raclette: whichever one it is, where can we get it in New York? And be hasty about it, man!

Everyone was pretty psyched about jambon de Bayonne coming to the U.S.. That’s Bayonne, France, not Bayonne, New Jersey, the city that gave us George R.R. Martin, the ham of the literary world.

After all that jambon, it’s no wonder people were curious what would happen if you ate nothing but grapes for three solid days. Spoiler alert: by day three, you hate grapes.

Finally, some questions ate at us this year. What is the deal with French AZERTY keyboards, for instance? And why does everyone at French Morning capitalize their last names? What will become of charcuterie now that it’s as definitely carcinogenic as cigarettes? Is Marine Le Pen the French Donald Trump (read: “unelectable”)?