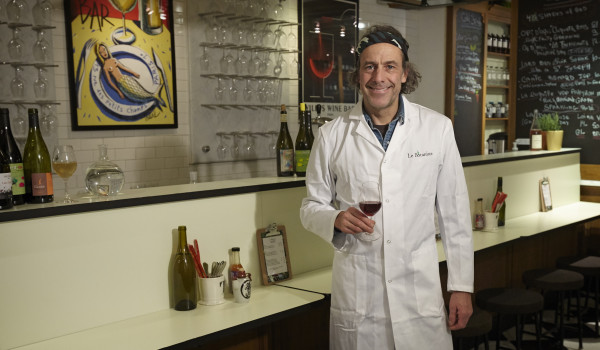 With Le Botaniste, Le Pain Quotidien Grows Like A Plant

You love Alain Coumont’s breads, but will you love hummus with green peas in mint?

The iconoclastic founder of Le Pain Quotidien has launched an new concept on the Upper East Side: Le Botaniste, a restaurant with a menu concocted entirely from herbal and organic products. Here you’ll find vegetables galore, salads, herbs, sushi, and soup, alongside an always-changing selection of natural wines and juices.

“We are 100% organic. That’s a rarity in New York! Many vegan restaurants in New York are not organic and serve fake meats. When you look at the composition of these products, you find chemical elements.”

Like his cuisine, “simple and authentic” is the hallmark of Coumont’s life philosophy as well. The Beglian has a farm near Montpellier, where he grows experimental plots of ancient corn and amuses himself with a bread oven. This “part-time vegetarian,” who denounces the over-consumption of meat, launched the Botaniste concept in Gent, Belgium, “a progressive city where they serve vegetarian food in the canteens.”

The new export to New York City, where Le Pain Quotidien has become Le Pain Omniprésent, was a “natural” next move, according to Coumont. If Le Pain and Le Botaniste are different buildings, they still have the same shareholders. Besides Le Botaniste opened on the premises of one of New York’s first Le Pain Quotidien and uses some of its products!

If it wasn’t clear from the menu, Le Botantiste’s interested in your health is telegraphed by the apothecary design of the space. Bottles are shaped like test tubes, carefully labeled on their shelves and in drugstore cabinets that greet patrons when they enter. The huge menu behind the counter isn’t headed by “Menu” or “Carte” but “Prescriptions.” In a second room, you’ll find a small sushi bar covered with plants facing a white-tile wall built by Coumont himself.

And, of course, the staff wears the white coats of a doctor or pharmacist.

There’s nothing on Le Botaniste’s menu that an enterprising farmer wouldn’t eat. There’s a coconut ceviche, a seaweed tartare, spicy chili (sans meat), and a bowl of steamed vegetables. Don’t look around the kitchen hoping to find a deep-fryer or you’ll be sorely disappointed. “Not everything on the menu is raw, but there are a lot of raw items,” says Coumont.

Le Botantiste isn’t intended as a haven for vegans and vegetarians, warns the manager, Laurent François. “We say that our cuisine is based on plants, not that we’re vegan, to avoid scaring off non-vegans.”

“We welcome anyone with 15 bucks in their wallet or on their debit card,” adds Coumont. The seed is planted.