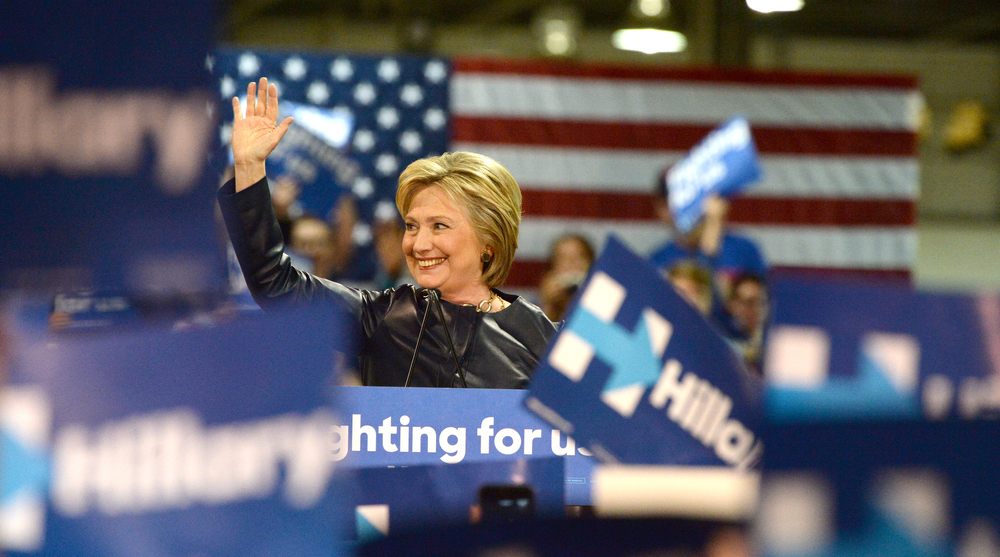 Why Is Hillary Unpopular…in France?

If the United States and France both elect a female president in upcoming elections, the new heads of state will be worst enemies.

That’s because the French woman trying to smash the glass ceiling is Marine Le Pen – France’s “Donald Trump.” As US president, Hillary Rodham Clinton would oppose everything she stands for.

Polls show roughly 58 million mostly white Americans will cast their vote for Trump instead of HRC, despite her strong performance in the first presidential debate. She is not especially popular in France either. That’s due in part to Marine’s hostility.

The two women really have only one thing in common: their determination to be the first woman to lead a country suffering from a profound gap in women’s leadership. By some estimates the United States will need 500 years to achieve equal political representation of women. The chronic deficit of women in France’s political ranks led to the introduction of gender parity laws in 2000.

Marine (she prefers her first name) is France’s most popular politician. She will be the far-right candidate in the French presidential election in April. Though she was a distant third behind Nicolas Sarkozy and François Hollande in the first round of the 2012 election, polls unanimously predict she will win the first round of next year’s race.  What they can’t reveal yet is which of her male rivals for power will run against her in the second round.

“For France, anything is better than Hillary Clinton.”

The twice-divorced mother of three children has transformed the anti-immigrant National Front into France’s most popular party. On the way to the top, she muscled out its founder, her own father Jean-Marie Le Pen, a Holocaust denier with ties to neo-Nazi groups.

Polls show Marine is currently twice as popular as France’s Socialist president Hollande. She is one of France’s most recognized faces in Europe and a contender for “most famous French woman on the planet.” When Madonna comes to Paris, she invites Marine for a drink. WTF, France?

Many of the French dissing Hillary Clinton point to America’s emerging class warfare – something the French normally specialize in. The right-wing journalist Eric Zemmour finds in her “the contempt of the winners of globalization for the vanquished” in the  “unlikely clash of classes in the country that has always ignored the Marxist predictions of the class struggle.” It doesn’t help that she has the “charisma of an oyster.”

Likewise André Bercoff, author of a fawning book about Trump, claims that French and American politics now bear a strange resemblance: “Immigration, insecurity, uncertainty, a marginalized middle class, the rate of frustration rate exceeds the rate of production: who would have said that America and France…could be so alike?”

Of course, Clinton has her supporters in France: beginning with the President. “The best thing the Democrats can do is to get Hillary Clinton elected,” François Hollande told the French newspaper Les Echos.

But the endorsement counts for surprisingly little. The man sitting in the gilt splendor of the Elysées (France’s White House), nurses an approval rating of 16 percent. He has gone from being embattled to irrelevant.

Hillary Clinton is widely credited with being “ultra prepared” to govern and for moving to the left on a range of issues:  “minimum wage, free education, finance regulation … The Democratic candidate has rarely seen such a progressive agenda, inspired by Bernie Sanders,” notes the daily Libération.

But France’s view of Clinton is increasingly tainted by what Socialist Prime Minister Manual Valls calls the “Trumpization” of French politics. In a France traumatized by terror, it is Marine who is winning the war of ideas.

In her world, the split is not between Left and Right but between globalists – who accept some immigration, negotiate trade deals and favor the EU and the euro – and patriots like herself who reject them all.  She prefers the US “patriot” Trump to the “globalist” Hillary Clinton.  Marine, like Trump, has Russophilic tendencies. She not only look towards Moscow more than toward Washington, she is also receiving a vast amount of campaign cash from Putin.

Marine’s gravitational pull over French politics is now so great it has warped the campaign strategy of former president Nicolas Sarkozy. Running for office again and hoping to win the nomination of the mainstream center-right party Les Républicans, Sarkozy has borrowed his hard right platform from Marine and in-your-face campaigning style from Trump. He has even become a climate change denier.

This is the same Sarkozy whose nickname used to be “Sarko, l’américain” for being the most pro-American president since World War II. He rejects any comparisons to Trump. “I happen to be friends with Hillary Clinton,” he insists.

Is Clinton unpopular because American voters – and French non-voters – are sexist, without admitting or even being aware of it? That’s the arguement of Nicole Bacharan and Dominique Simonnet, co-authors of a First Ladies, à la conquête de la Maison Blanche (‘First Ladies Seeking to Win the White House’). “Ambition and tenacity, admired in a man, are off-putting in a female candidate.”

Marie-Claude Martin, who held a top position in UNICEF, calls it a case of “Cinderella Syndrome.” The former First Lady, Senator and Secretary of State, at the end of a 40-year political marathon, fainted during a 9/11 memorial service and had to be helped away – and lost a shoe according to witnesses.  She was then subjected to a global wave of speculation about her mental and physical fitness to be commander-in-chief. This is the fate of any woman “who aspires to hold the planet’s most virile position.”

It seems people on both sides of the Atlantic just don’t think Hillary Clinton is man enough for the job.