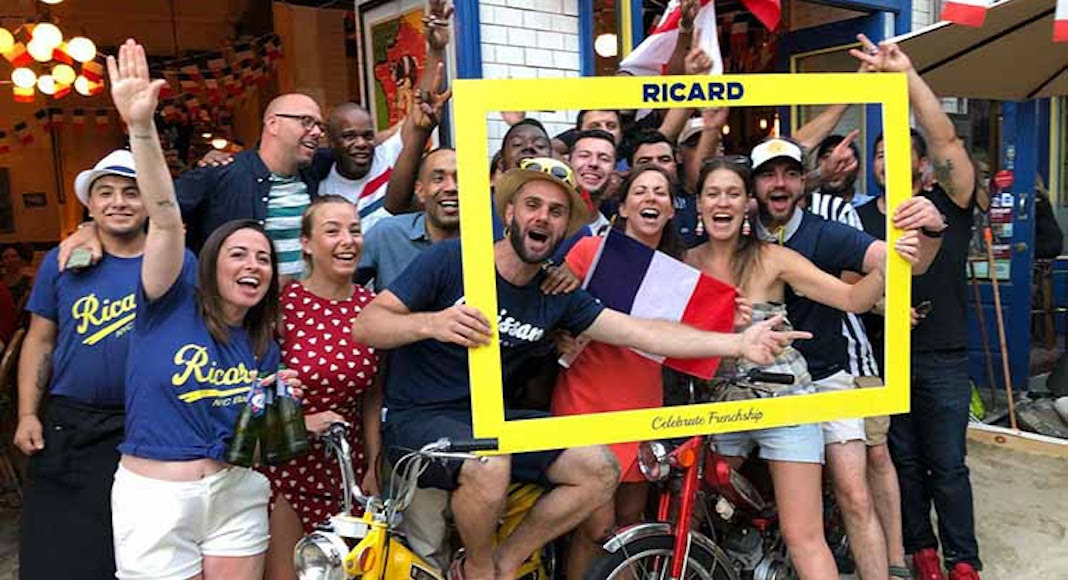 Where to Celebrate Bastille Day 2021 in NYC

After a year off in 2020 because of Covid, Bastille Day celebrations are back in New York starting July 10 and continuing for the next week. Here is an overview of the events organized in the Big Apple.

Cafe du Soleil, the French restaurant in the Upper West Side, is organizing its Bastille Day this weekend with a day of celebration planned on Saturday starting at 12pm. The establishment will prepare special drinks and menus for the occasion, and has also planned a pétanque tournament with live music (call the restaurant and ask for Max to register a team).

Usually a famous meeting place for Brooklyn’s Bastille Day, Bar Tabac didn’t get the authorization to pedestrianize the block between Dean Street and Smith Street in Boreum Hill this year. However, George Forgeois’ bar/restaurant is organizing live concerts all week long, between July 12 and 18 (Rock ‘n’ roll, gypsy music, Caribbean music), to be enjoyed with a good French dish and a glass of rosé or Ricard.

The Paris American Club has decided to take to the sea on the eve of Bastille Day, with a sailboat trip in the waters of New York with live jazz and a fine wine tasting from 7:30pm to 9pm. Meet at the North Cove Marina-Brookfield Place at 7pm. Cost is $120 for club members, $130 for non-members (ticket includes ride, concert, three glasses of wine, cheese and snacks). The evening will continue with dinner at Liberty Bistro in Le District at 9pm, with a menu consisting of hors d’oeuvres, a main course, dessert and wine. ($140 for members, $160 non-members.)

Used to organizing a giant street party for Bastille Day, which was cancelled due to Covid-19, FIAF is partnering this year with the Consulate General of France in New York and the Committee of French and French Language Associations of New York for a concert and film screening. Join us on July 14 at 6:30pm at SummerStage in Central Park for a jazz concert with vocalist Kavita Shah, followed at 7:30pm by a “French House Party” with French DJ Joachim Garraud. The evening will end with a screening of Caroline Vignal’s film “Antoinette dans les Cévennes” at 8:20pm. Free event, first come, first served.

In Jersey City, the bilingual school The French American Academy is organizing a “Street Event” on July 14th from 2:30pm to 6:30pm (209 3rd street). On the program: dancing, games, food and drinks in the streets, followed by an open house at the school from 4pm to 6pm for those who wish. The French airline French Bee, which is launching flights from Orly to Newark on July 15, will also be giving away two round-trip airline tickets in a raffle. Free event, reservations here.

French language school Coucou French Classes is hosting an open house with live music, cocktails and appetizers (provided by Michel et Augustin and Maman) at its Nolita location on July 17 from 3pm to 7pm. After months of closure, this event will be an opportunity for current and future students of the school to gather, and meet their teachers and classmates. Free, reservations encouraged on Facebook.

New York’s favorite French and Francophile party is back. Le Bal Français will celebrate Bastille Day on Saturday, July 17th starting at 9pm at Kings Hall, a beautiful glass and disco ball venue located in East Williamsburg. Come drink and dance arm in arm until the wee hours of the morning to our good old French hits. An evening “like at home.” Tickets are $38.40 here.

The Carreau Club, a new pétanque bar/club located in Industry City, will organize the first edition of “La Brooklynaise” on Sunday July 18th at 12pm, a giant pétanque tournament with 80 teams. Gifts for all participants as well as trophies and prizes for the three best teams are planned. The cost is $75 per team. The event will take place outdoors all afternoon with pastis and food stands (including oysters and jambon-beurre sandwiches provided by the restaurant M. Wells), as well as a French music DJ set. Info and reservations here.