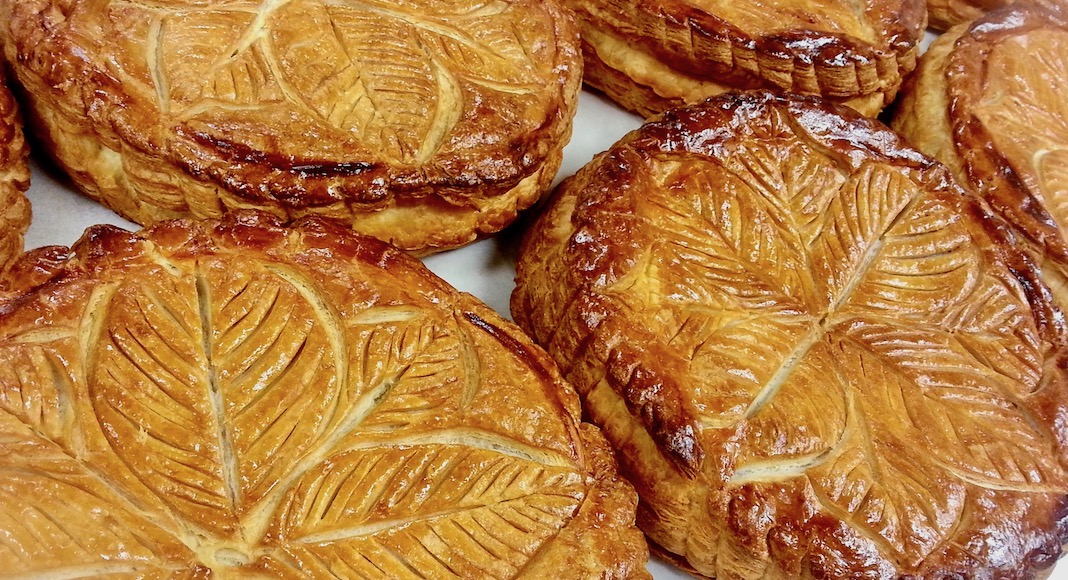 Where to Find Galette des Rois in Texas in 2019

The galette des rois is not to be refused. You can try, but you likely can’t resist… it’s just too delicious. And who could pass up the chance to find the fève (bean) and become the king or queen? Here’s where you can find some really good galettes in Texas.

At pastry chef Nga Rogers’ Pâtisserie Paris Je t’aime, things are always done according to the rules of the art. The King Cakes are, of course, homemade, from the puff pastry to the frangipane. Porcelain fèves, imported from France, are hidden in the galettes. Also worth trying, a version where frangipane is replaced by a homemade apple sauce. Available mainly by pre-order until January 31. One galette serves six ($30), eight ($40) or ten ($50) people. — 11660 Westheimer Rd, Ste 107A. (281-531-1222)

At Julie’s French Pastries, galette des rois is available in three versions: frangipane, frangipane-chocolate, and frangipane-apple. A blackberry is used as a fève in the galette to elect the king or queen, but a porcelain fève is provided as well. Available from Friday, January 4 and throughout January, in store in an individual version ($6) and by order for sizes serving 8-10 ($32) and 10-12 ($46). — 14522 Memorial. (281-741-9161)

At the French Gourmet Bakery, you can find the traditional version of the galette or opt for the King Cake in the New Orleans style. Galettes will be on sale for Epiphany on January 5 until Mardi Gras. They will be accompanied by a fève, a crown, and necklaces for the Cajun version. Available by pre-order only in a size serving 8-10 people ($44.99). — 2250 Westheimer Road. (713-524-3744)

As every year for almost nine years, Baguette et Chocolat is obviously one of the main places to go for galettes des rois. The bakery-slash-pastry and coffee shop offers a galette made from puff pastry and pure almond cream (different from frangipane, which is a mixture of almond cream and pastry cream) — all homemade, of course. The cake is accompanied by a porcelain fève (again provided beside the galette), a bag and a crown. One galette serves 6-8 people ($35). Pre-order 48 hours in advance; available all month long starting January 5th. — 12101 Farm to Market 2244, Bee Cave (512-263-8388)

The galettes des rois at Julie Myrtille Bakery are handcrafted, made with pure homemade butter puff pastry and topped with frangipane cream with almonds or frangipane cream with raspberries. Each wafer is delivered with a traditional porcelain fève, to be inserted into the galette, as well as a bag and a gold crown. Orders should be made by email at [email protected]. Order January 2 to 27 before Wednesday for a weekend pick-up. The cost is $7 per share. The galettes can be picked up at one of the six Farmers Market addresses. — Details and addresses here

Additionally, like every year, the Alliance Française d’Austin will celebrate the galette des rois with a cocktail party. The event will take place on January 5 starting at 4pm at the Café and Playground of Central Market on North Lamar. Free for members, $7 for non-members. — 4001 N Lamar Blvd. 78756.