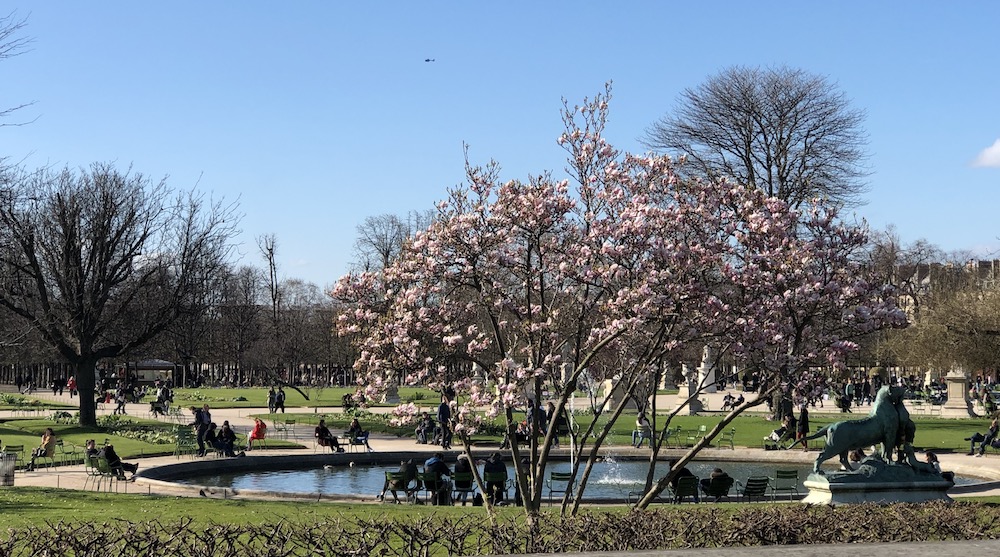 11 Things To Do In Paris This April

Beyoncé and Jay Z may have drawn your attention to it in a certain music video set in the Louvre: the representation of black people in art. “Le modèle noir: de Géricault à Matisse” is the first exhibition by a major French art institution broaching the topic of the representation of black people in France in art. Specifically, how they were depicted in art and how they were used as models. It’s installed at the Musée d’Orsay until July 21 of this year. The exhibit features works addressing particularly significant periods for black people in history and in art, from the abolition of slavery in France (1794) to the Harlem Renaissance. Buy tickets here. — Musée d’Orsay, 1 rue de la Légion d’Honneur, 75007

On March 28, 2019, Galeries Lafayette opened its doors on 60 avenue des Champs-Elysées in Paris in a nearly-70,000 square foot space. It’s a Parisian outpost of the luxury department store’s Grands Boulevards location and it promises a new kind of shopping. Fashion, beauty, lifestyle, and food items will all be for sale, with the experience optimized through a Personal Stylist app and “smart hangers” which tell you if an item is available in your size. (If it is, it’s sent to the fitting room for you.) Make sure to stop by the café/restaurant by designer Simon Porte Jacquemus that has everyone talking. —  60 Boulevard Champs Elysées, 75008

Dating back in 957, the Foire du Trone first appeared as a small carnival in 1805. Today, it’s grown into quite a big carnival — the biggest fairground festival in France — with around 350 games, rides, and attractions to amuse people of all ages. It’s as good as any American amusement park, complete with stands selling cotton candy, churros, crêpes, ice cream, and more. For a whole day of fair fun, tickets are 25€ per person, and 15€ for kids under 10. — Bois de Vincennes, Pelouse de Reuilly, 75012

4. Gorge yourself on pasta at Eataly Paris Marais (opens April 12)

The global Italian food hall and supermarket brand Eataly will be opening its first Paris location on April 12, 2019, in Le Marais. Much like in New York, where the brand opened its first outpost in the US, Eataly Paris Marais will be a supermarket/restaurant concept, in a 4,000 square meter, three-floor space, where you can shop for your favorite Italian products, sample and buy 800 kinds of Italian wines, and chow down on traditional dishes. One of the most exciting parts? It will be open every day until midnight — including Sundays.

It’s been 50 years since Neil Armstrong first stepped on the moon. In honor of the anniversary, Le Grand Palais has created “La Lune,” an exhibit about humanity’s relationship with the moon, examined through art. The five-part exhibit takes viewers on a journey to the moon through time, from art created during Antiquity to modern day. African, Arabic, and East Asian art has been included in this exhibition beside the primarily featured European art. Buy your tickets in advance here to avoid waiting in line. — Le Grand Palais, 3 Avenue du Général Eisenhower, 75008

Until April 22, Le Bon Marché is featuring sophisticated geeks and inviting brands to participate in their Geek But Chic fashion and tech crossover pop-up. If you remember how high last fall’s Los Angeles-themed pop-up set the bar, you know this one has to be amazing too. It’s a reinvented shopping experience of the future, with participating brands have making specific creations for the pop-up. At Nars, a mirror connected to a tablet allows you to see the tints and features of your face virtually change colors according to the colors you’ve selected on your make-up palette. Bon Parfumeur and YSL Beauté also offer testing of their new products virtually. Head to Le Bon Marché to engage with (and shop!) the pop-up yourself.

The multi-purpose art/rehearsal/performance/community space Centquatre will be holding the 8th edition of Circulation(s), a festival devoted to young contemporary photographers. The program features exhibitions, round table discussions, screenings and more, plus a photo studio during the weekend where where you can have your portrait taken by a professional photographer. Besides checking out the exhibit, explore the entire Centquartre space — the artistic and communal energy is palpable. Visit Le Café caché for coffee, Le Camion à pizzas for late-night food, and Grand Central for lunch and dinner. The exhibit is 6€ full-price (4€ reduced-price) to enter, and entering Centquartre is free. — 5 rue Curial, 75019

8. Breath in the floral blooms

April is the ideal season to see Paris in bloom. Though many magnolias are losing their petals (Jardin de Tuileries), some are in full-bloom (Jardin du Palais Royale, Jardin Villemin) and others are yet to bloom (by the Hôtel de Ville), so there’s still hope if that’s your favorite flowering tree. The cherry blossoms have only just begun to bloom at the beginning of the month. You’ll find them and other flowering trees at Shakespeare & Company, on the south side of Notre-Dame cathedral, Square René-Vivani, Jardin du Champs-Elysées, Champs-de-Mars (between Avenue Gustave Eiffel and Avenue Joseph Boulvard), and Parc Montsouris, to name a few.

For serious runners, sign up for the Paris Marathon, the Schneider Electric Marathon, on April 14. Some 50,000 participants take place in this annual 26.2-mile race (or 42.195 kilometers). From the Rue de Rivoli to the Quai de la Seine, runners will pass Paris’s most spectacular landmarks, cheered on by spectators. Though it’s too late to register as an individual, it’s still possible to register to run with a charity. Check out the route here if you prefer to stand on the sidelines and cheer the runners on. Allez allez allez!

Before the 28th edition of the vintage car race Tour Auto Optic 2000 begins, the cars park for a day at the Grand Palais to be admired by the public from 10 a.m. to 5 p.m. The next day, the 240 competitors depart for a five-day competition on four circuits and 10 special stages. Like the Tour de France, the route changes every year, this year going through Dijon, Lyon, Vichy, and Tours, with the last day in Deauville. What makes this race special? Only cars made between 1951 and 1973 (with a few exceptions) are allowed to enter. — Le Grand Palais, 3 Avenue du Général Eisenhower, 75008

Le Village Royal, between place de la Concorde and Madeline, with its couture boutiques, may not be on your list of places to visit in Paris, but with it’s the newest installation of an umbrella ceiling, it is a must-see. Inspired by the original Portuguese village Agueda that puts up colorful umbrellas, dubbed “Umbrella Sky Project,” in the summer months to attract tourists, Le Village Royal recreated the same above its open square connecting the stores around it. Colorful umbrellas form a toît on the square, making spring’s rainy Parisian days a bit more fun. And while you’re snapping your shot, take an extra moment to see the works of sculptor Dirk De Keyzer below the umbrellas. These two installations are here to stay through the end of April, so see them before they go.