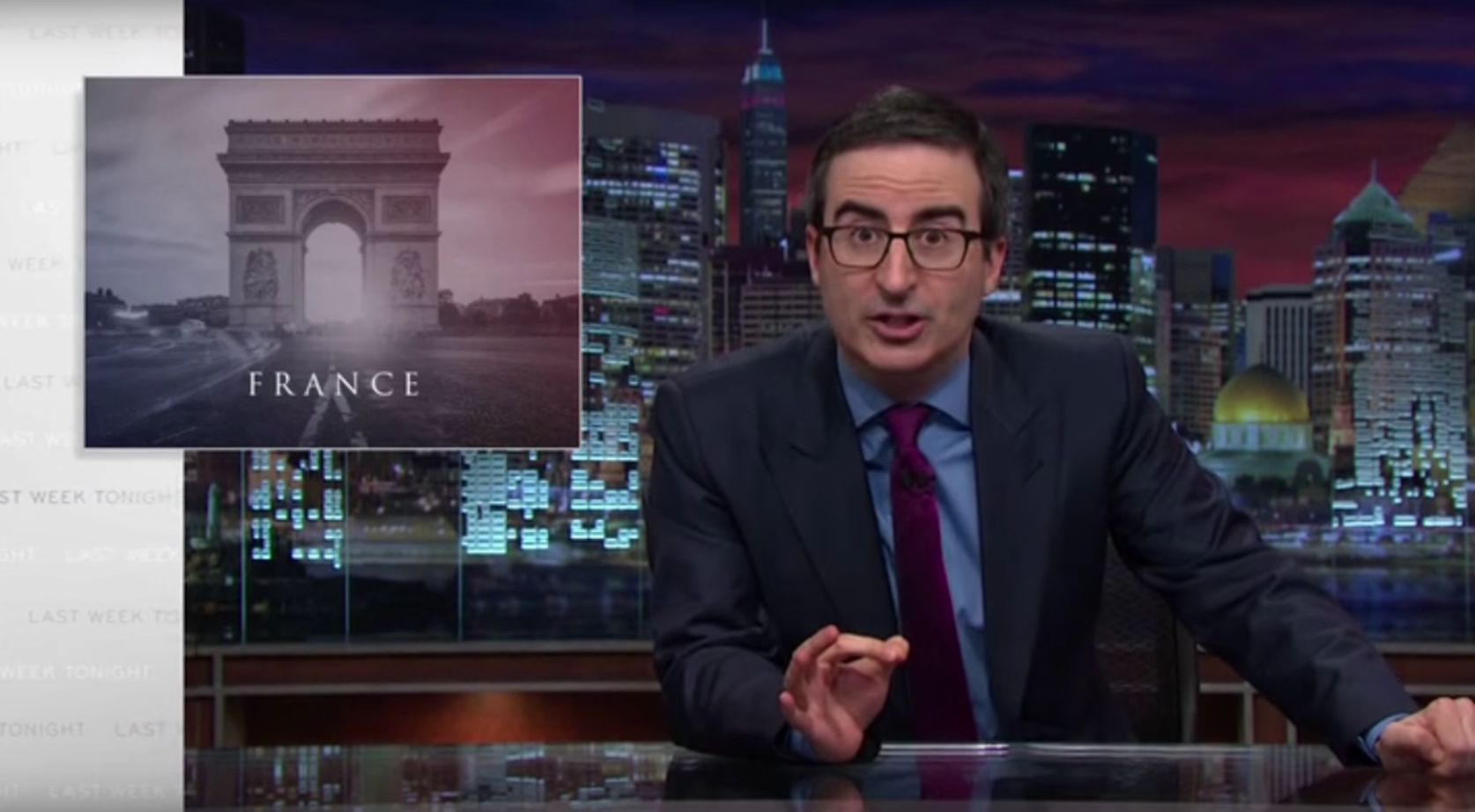 On Monday, we woke up and watched John Oliver absolutely savage terrorist ideologues.

Parisians defiantly returned to the sidewalk cafés and bistros of the city, while the Eiffel Tower briefly reopened.

Anonymous released a statement they were actively at war with IS, a continuation of their online engagements with Islamic State following the Charlie Hebdo attacks. Anonymous had claimed a partial victory in February. BinarySec, another hacktivist group, also confirmed cyber warfare against the caliphate.

The Telegraph posted an op-ed by a French Muslim that is notable for its wording: “We… have allowed our religion to be hijacked by dimwits.”

Wembley Stadium, never known for its overt love of French anything, was the site of what might be the largest—or at least the loudest—sing-along of “La Marseillaise” in history.

On Wednesday, police raided a house in Saint-Denis where Abdelhamid Abaaoud, the suspected mastermind of the Paris attacks is believed to have lived. Eight people were arrested and two died in the raid, including a woman who blew herself up. She was reportedly a cousin of Abaaoud.

All was not well in the world of police raids, as officials held an “innocent man” at gunpoint in the same neighborhood.

IS—or at least an affiliated group called the Islamic Cyber Army—released a statement calling Anonymous “idiots” and asking “what they gonna hack…” before launching into helpful IT tips for IS members who know as much about the internet as your grandmother: don’t open suspicious email links, don’t direct message strangers on Twitter. Studies have undoubtedly shown that most hot, eighteen-year-old female extremists on the internet are, in fact, middle-aged male jihadis.

Later in the day, the Washington Post quoted two European security officials as confirming that Abdelhamid Abaaoud was among those killed in the early morning raid in Saint-Denis.

Thursday, it was time to celebrate the arrival of the Beaujolais Nouveau, touted by Georges DuBoeuf as one of the greatest vintages in living memory. Quicker fermentation means fewer tannins means fewer emotional outbursts!

Not even a week to the day, a co-manager at Le Bataclan said the venue would “not surrender.”

France’s MPs voted to extend the state of emergency in France through Februray.

The free travel among EU states continued to be in jeopardy as ministers met to discuss the tightening of border security throughout the coalition.

Meanwhile, in the United States, Kentucky Senator Rand Paul—named after famous Russian objectivist who gleefully immigrated to the U.S. and partook of the welfare state with no sense of inner irony—suggested limiting immigration access to the French. No mention was made of limiting access to guns for mentally unstable or ideologically extreme Americans.

Friday, we came to terms with the Week In Review not having the usual légèreté and… what’s the French word for “levity”?

But it was heartening to see Ernest Hemingway’s paean to Paris, A Moveable Feast, storming the charts again. No American ever understood Paris better, nor helped more Americans understand Paris better.

Salah Abdeslam, the “eighth attacker” in last week’s attacks in Paris, is reportedly on the run, revealed to a Belgian website that he regrets his part in the attacks, and may ultimately have chickened out, which gave him the chance to escape capture.

Photographs of some Russian missiles inscribed with “For Paris” in Cyrillic show us that Russians continue to lack nuance and subtlety. We humbly suggest the Russian military consider less parochial options like, “For Mankind,” “For People Who Enjoy Sex, Charcuterie, and Cheese Across The World,” and “Death Answers Death, Love Answers All.” Or, instead of dropping bombs, drop indestructible boomboxes on IS, all blasting “Aux Champs-Élysées” in ear-splitting unity.

It is unknown how beloved Russian actor Gérard Depardieu feels about his tax dollars paying for missiles meant to assist the French government.

Jean-Marie Le Pen, founder of Front National and father of Michele Bachmann impersonator Marine Le Pen, would like to “decapitate” terrorists, presumably because people with heads generally make him uncomfortable.

Meanwhile, we found the greatest image for a French publication’s Twitter humanly possible:

Le Monde reminded us of seven good things that happened this week, including Ireland’s first gay marriage, Guinea’s last known case of Ebola being cured, the U.S. discontinuing all research on chimpanzees and releasing current subjects into sanctuaries, and a two-year-old panda being released into a nature preserve in China. Before leaving, the panda’s parents were quoted as saying, “Look, if you’re going to have sex out there, for god’s sake, use protection.”

David Bowie, possibly the most French person not born in France, released a video from his upcoming album.