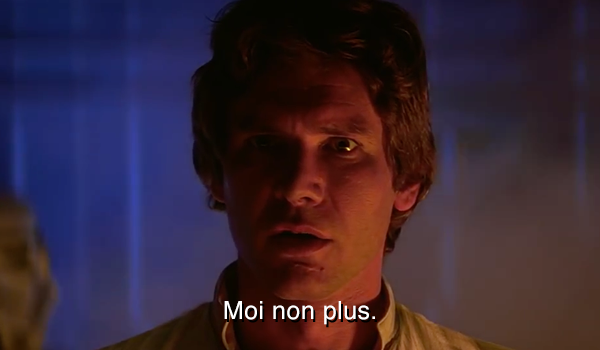 The tide of the Front National was pushed back only to discover that the remnants of the Empire still haunted galaxies here and far, far abroad. It’s the week that was:

Sunday, Marine Le Pen, her niece, and the Front National in general were thoroughly trounced at the polls, leaving them in control of exactly zero super régions.

By Monday, it was evident that street artist and ninja Banksy had silently left his mark in Calais and its migrant “Jungle.” Well, not so silently; he said in a public statement that the son of a Syrian immigrant managed to create Apple, which isn’t such small potatoes.

Meanwhile, a kindergarten teacher in Aubervilliers was stabbed in the throat and side by someone claiming “This is for Daesh.” The attacker was the teacher himself, though, and the IS dialogue was only going on inside his head.

Tuesday, Marine Le Pen was acquitted in court over comments “inciting discrimination, violence or hatred toward a group of people based on their religious beliefs,” which is nice—she needed a win this week.

We went Beyond Brioche with the seasonally appropriate bûche de Noël.

On Wednesday, the godless French got to see Star Wars: The Force Awakens before the rest of the world, even though they refer to the clearly gray Death Star as L’Étoile Noire.

Because they didn’t have lightsabers, a member of the gendarmerie fired ten shots at a van that rammed a barricade at Les Invalides. The driver was described as “incoherent” afterwards, to the surprise of none.

That 50,000 square foot mansion you were thinking of buying—Chateau Louis XIV, was it?—well, it’s off the market, thanks to a “Middle Eastern buyer” who paid $300 million for the privilege. Despite what its name might suggest, the 56-acre property is only three years old.

Thursday, former Finance Minister and current IMF president Christine Lagarde was ordered to stand trial for her part in the Bernard Tapie scandal, in which the former Adidas received a $434 million state payout over the sale of the company. That’s nearly one and a half Chateaux Louis XIV.

Meanwhile, France is expected to pay out up to $324 million to the victims of the Paris terror attacks. That’s one Chateau Louis XIV and an 8-bedroom on the Champ de Mars.

In related former-IMF-president news, Dominique Strauss-Kahn was in court again over child support for a five-year-old boy he sired with an unnamed mother.

Friday, we got news that the plain-packaging provision of France’s new smoking law escaped being stripped by the Senate. Imagine the horror of smoking a Gauloise by accident, just because you put your pack of Camels too close to your friend’s pack.

Speaking of which, a bill has now been adopted that forces models to be certified by a doctor. They will be “assessed in particular in terms of body mass index, is compatible with the practice of the profession.” The politicians involved also want photoshopped images to be marked as such, which will severely limit the amount of cover space magazines can use to make readers question their self-worth.

In other news, it’s week 15 of being Pregnant In Paris.

Marc Veyrat, one of the chefs hired to cook for the COP21 summit on climate change, was fined $108,000 for burning down 75,000 square feet of protected forest. Veyrat has three months to restore the Alpine wetlands.

800 migrants stormed the Chunnel in broad daylight trying. Their flight to the U.K. was subdued by with tear gas, but some managed to hop onto trucks and escape.

Star Wars failed to get the best-opening-day-in-France-ever crown away from Spectre, which cheated by opening on a holiday. The Force Awakens pulled down $5.8 million on Wednesday alone and is easily the third-best Star Wars film to-date.