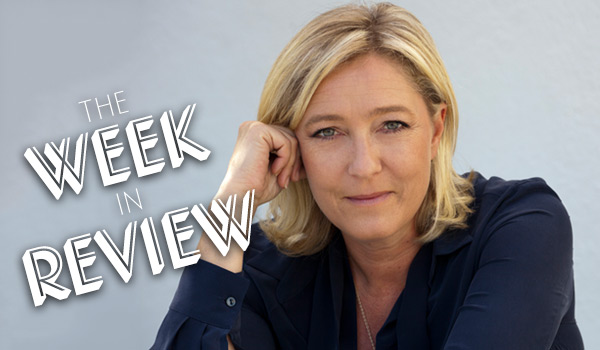 Last weekend, French Morning went to the market. The Brooklyn Artistans Christmas Market to be precise. And there we shall go again this weekend, if you need some artisanal gifts this holiday season. But between last weekend and this weekend, there was the week that was:

On Monday, France woke up to a country in danger of being controlled by Marine Le Pen’s Front National, at least at the regional level. Six out of thirteen super régions are in play for the far-right phenom in this Sunday’s second-round elections.

Don’t worry, though: the Socialists withdrew candidates from the two regions most likely to be won by the FN. Meanwhile, Sarkozy refused to do the same with Les Républicains who had come in third behind the Socialists in polls. This is, by the way, exactly how the Nazis ended up in control of France.

In rosier news, the Eagles Of Death Metal joined U2 on stage in front 16,000 people less than two miles from where their last concert ended in bloodshed.

Tuesday, we found 17 things the French do better than Americans. Meanwhile, they came up with 45 things we do better.

Ever the remorseful drunk boyfriend, Russia gave France a puppy to replace the one they’d killed.

Mercredi, we figured our American readers might need familiar comparisons to get a hold on the Front National‘s strange politics, because, at least in America, you don’t generally get isolationists who are also economic liberals.

The New Yorker agreed with us in three paragraphs of “Donald Trump Is Now America’s Marine Le Pen.” The Gaul of that woman!

Just to make things weirder, Madonna showed up at the place de la République and sang “Like A Prayer.”

In an effort to give people something better to listen to than Madonna, Spoken Word Paris released the first episode of its new podcast, Spoken Word Sounds.

Thursday, we ruled on the best burgers in Paris. Court dismissed.

Okay, well, it looks like Marine Le Pen and the Front National may face a hard test this Sunday, as the country’s voters now seem to realize there’s a possibility of her actually winning. Meanwhile, Trump supporters are intractable.

Friday, a jewel thief robbed the Chopard location across the street from the Élysée Palace, making off with an estimated $1.1 million in broad daylight.

A French beggar wrote a bestselling book about living on the streets, which is about the only way anyone can get a book deal anymore. He is still living in the streets though, which shows you what book deals are worth—he won’t see royalties for another ten months.

Jewel thieves are notoriously selfish, though, so it’s a good thing there was a pickpocket around to save this drunk guy’s life on the Métro.

Burger King is gobbling up Quick Burger, the French fast food chain that could stand to have chicken fries.

What will happen in France’s regional elections this Sunday? Who knows, we’ll be at the Brooklyn Artisans Christmas Market!