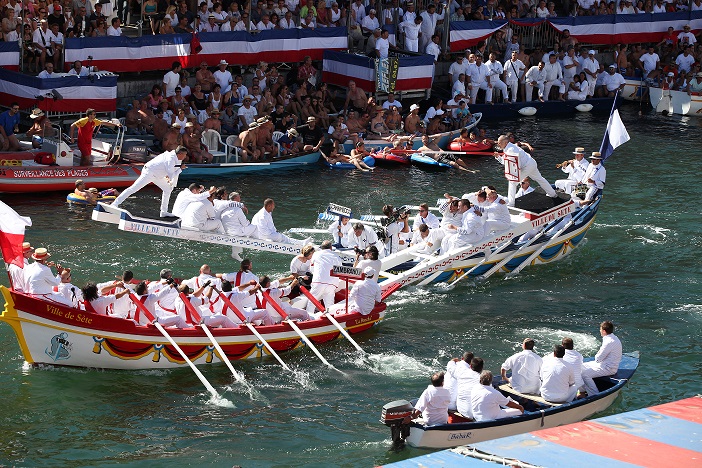 What to Watch After the Olympics: Water Jousting

Behind each, an oboist and drummer beat out crescendoing battle songs as the warriors advance gracefully towards one another. To the roars of the crowd, the two men jab their lances at each other. One is plunged into the depths of the Canal Royal on the Mediterranean Sea. The other becomes a living legend.

Now rejoice, for you need not imagine. This glorious sport is happening now.

Water jousting is a centuries old Languedoc tradition similar to regular jousting, but on creaky wooden boats instead of valiant steeds. This unique tradition is celebrated in the coastal town of Sète, during the annual Fête Saint Louis, now in its 274th year. In the pinnacle of competitions, the heavyweight division, the prize is “no less than immortality.”

That’s right, the people of Sète are more serious about this sport than French vintners are about the precise techniques necessary to brew true Champagne. For tradition and safety, the rules are strict and must be followed. Ten fishermen row the boats, each with a captain at the helm. The musicians (always an oboist and drummer) are required to rally the spirits of the oarsmen and jouster.

The boats first pass each other in peace, allowing the opposing jousters to shake hands. Then the games begin. The first man to push the other man off of his boat and into the water, wins. (Watch the first minute of this video to catch a glimpse of the drama of water jousting.)

Water jousting won’t be found at your typical Renaissance Festival or Medieval Times show—it’s far too serious for merely passing interests. So as not to divert attention from Rio, the Sète games commence this weekend, taking place from August 18th-22nd.