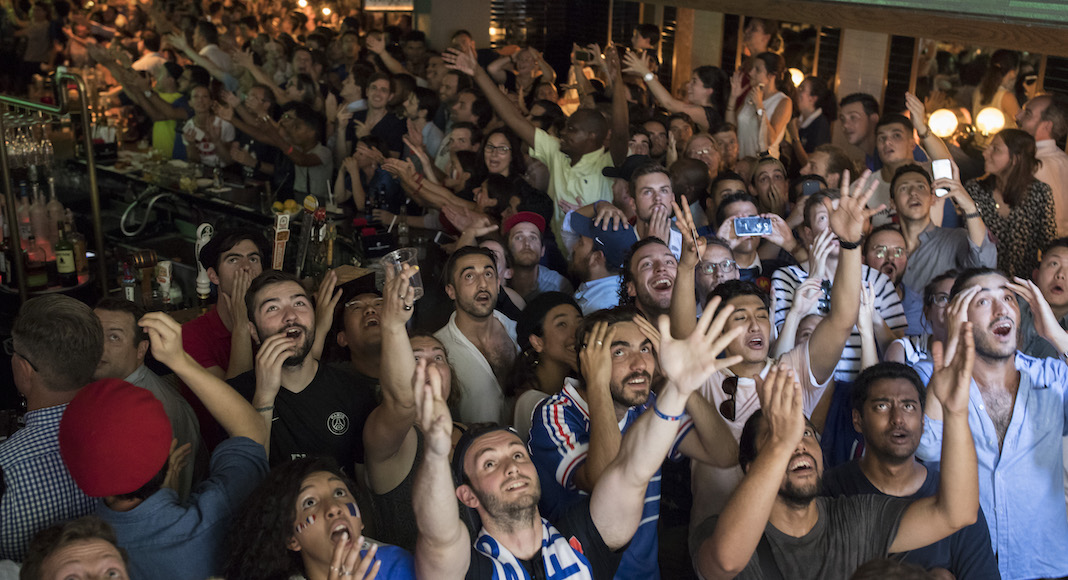 “On est en finale!” Les Bleus qualified for just the third World Cup final in their history on Tuesday after a 1-0 win against Belgium. They will face Croatia on Sunday, July 15 at 11am (ET) for the title. Here’s a list of places not to miss the game in New York. Allez les bleus!

What luck! The finale falls on the same day of the great Bastille Day on 60th by the French Institute Alliance Française, the biggest “le 14 juillet” celebration in North America. French Morning is an official partner. Just like the Euro 2016 final, FIAF will organize a large open-air broadcast of the match, on a giant screen installed on East 60th Street (between 5th Avenue and Lexington Ave). The event is free and admission is free. First come, first serve for seating.

More of you show up every game. You were over 800 strong on Tuesday to attend the semi-final. French Morning will be at 5th&MAD again, in partnership with XL Airways, for the match screening at 11am sharp. With 18 screens, including one giant, you will be in good conditions. Admission is free, RSVP here. On-site consumption will be charged at the rates usually charged by 5th&MAD. Seats fill up fast, so get there early!

The French-American Chamber of Commerce of New York will organize a broadcast of the match at the Tribeca bar/restaurant M1-5 Lounge on Sunday starting at 10:30am.

Members of the Paris American Club of New York and their friends will meet at Monte’s Trattoria restaurant in Greenwich Village, to watch the game over a brunch “with French touches.” $35 for members, $45 for guests. Reservations can be made on their website.

Other bars for watching the match: