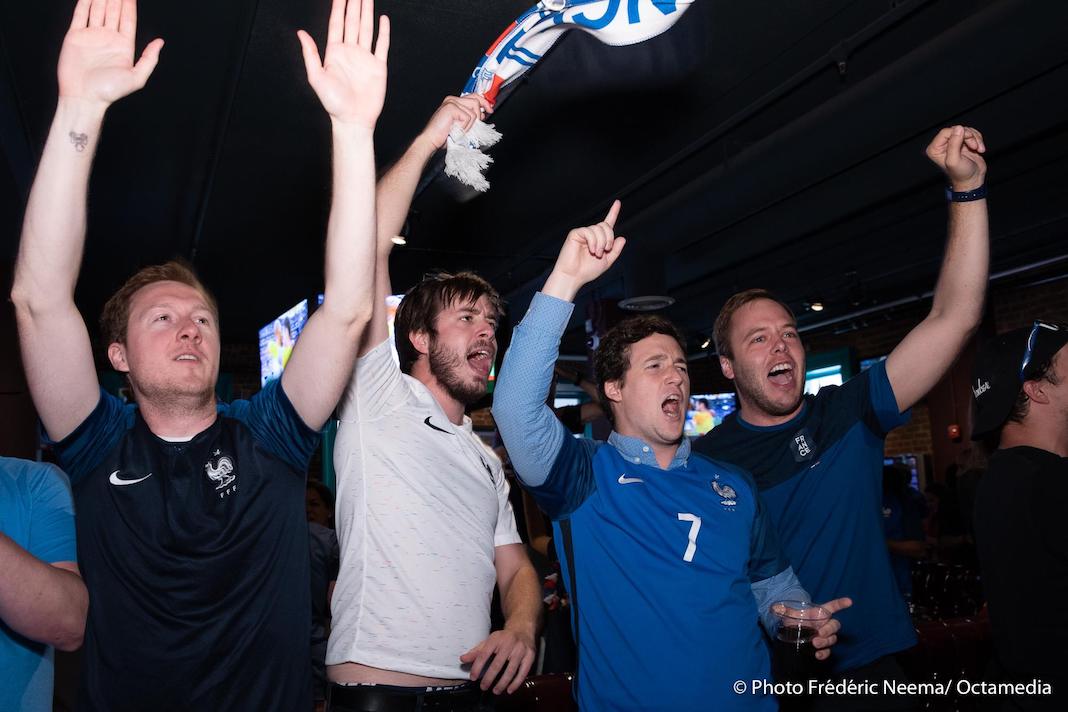 Where to Watch the France vs. Belgium World Cup Game in San Francisco

You can’t stop Les Bleus! They’re going all the way! After Argentina, Uruguay was a walk in the park for Team France. Will they be as convincing against the Belgian red devils? See you Tuesday, July 10 from 11am (PDT) for a semi-final match that promises to be exciting.

They were nearly 300 who responded to the invitation from the Supporters of the French Team in San Francisco to attend the quarter-finals, how many will there be to sing the Marseillaise and encourage Les Bleus for the semi-finals? To ensure the best possible reception, an entrance fee of $5 (cash only) will be charged and only those over 21 will be admitted. And because no matter the result, and the passion for football prevails, the supporters of the Belgian team are welcome.
Golden Gate Tap Room, 449 Powell St, San Francisco, CA 94102. (415) 677-9999. Website.

Located just opposite the Ferry Building, this large wooded park is the ideal place to enjoy the France-Belgium semi-final in the open air. Soccer activities and a climbing wall will be offered to the children. Food trucks will provide lunch.
Sue Bierman Park, Drumm St. and Washington St., San Francisco, CA 94105. Website.

Café Bastille, in the Financial District

Faithful to Les Bleus, Café Bastille will broadcast the match France-Belgium at 11am. There’s a giant screen inside and on the terrace, so you won’t miss a second of the match.
Café Bastille, Belden Pl, San Francisco (415) 986-5673. Website.

Unlike last time where the first half of the match was missed, you’ll be able to follow the whole match at Café de la Presse. To calm your nerves, you can enjoy a steak-frites or quiche lorraine while you’re there.
Press Café. 352 Grant Avenue, San Francisco CA 94108. (415) 398-2680. Website.

The Alliance Française of San Francisco is making its 60-person theatre available for a big screen viewing of Les Bleus, so fans can come and cheer on their team.
Alliance française, 1345 Bush St, San Francisco, CA 94109. (415) 775-7755. Website.

True to its reputation, Kezar Pub, located just steps from Golden Gate Park, has broadcast all of the World Cup matches, and they’ll will be ready again to welcome fans of Les Bleus this Tuesday at 11am.
Kezar Pub, 770 Stanyan St, San Francisco 94117. (415) 386-9292. Website.

Watch the match in this large Irish pub in the heart of the Italian district, where all nationalities meet to celebrate the sport over a corned beef sandwich, with a side of sauerkraut, all washed down with a Guinness!
Chief Sullivan’s, 622 Green St, San Francisco, CA 94133. (415) 722-9109. Website.

An impressive number of screens, crisp chicken wings, and a wide selection of beers are sure to attract crowds for the semi-finals at SFAC.
SFAC, 1750 Divisadero St. (415) 923-8989. Website.

The Chieftain, in SOMA

The Irish pub par excellence, in the heart of SOMA: Guinness in hand, bangers on the plate, we will celebrate the victory of Les Bleus, or we will drown our despair in more Guinness.
198 Fifth Street, San Francisco, CA 94103. (415) 625-0436. Website.

All matches, without exception, will be broadcast on the giant screens in the stadium of the local football team, the San José Earthquakes. Entry and parking are free, and coffee will be served for early risers. For the most anticipated matches, such as the final on July 15, there will be food trucks, bouncy castles, and other entertainment. Prizes will be awarded for the best outfit to support each game.
Avaya Stadium, 1123 Coleman Ave, San Jose, CA 95110. Website.