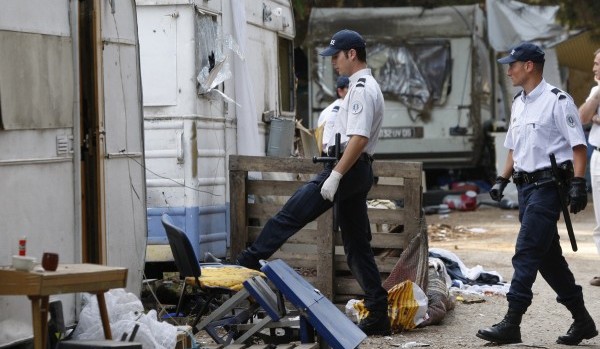 A 16-year-old boy was found bloodied and unconscious in a shopping cart on Friday. Why? Because he’s a “Rom”: one of the historically persecuted Romani, a nomadic people who rome the cities and towns of Europe and the US.

A horrifying scenario has emerged from reports that finger a dozen townspeople from the impoverished hamlet of Pierrefitte-sur-Seine in the Paris suburb Seine-Saint-Denis. It appears they targeted the boy because they suspected him of robbing a (non-Rom) person’s apartment earlier in the day. According to police sources, “a group of several people came to look for him in the [Rom] camp, and then took him by force.” The group took him to a basement and beat him. He is now in a coma, clinging to life.

Both the president of the European Grassroots Anti-Racism Movement Benjamin Abtan and the French President of the Interior Bernard Cazeneuve have denounced this act of violence. President of the General Council of Seine-Saint-Denis Stéphane Troussel responded, “It’s normally calm here, we have never had problems with the townspeople. Each time that such a violent act happens in France, it’s the law of the State that must respond. The French Republic must protect everyone, no matter where they live or where they come from.”

Clearly, the Romani people do not feel protected: after the attack they fled their camp, leaving detritus all over the front yard of the abandoned house in which they lived. This most recent act of violence against the Romani people is reminiscent of 2012 shooting of Trayvon Martin in Florida. In each case, race and cultural identity played a huge role in the attackers’ motivation. Racially charged crimes appear to be part of a larger–and depressingly familiar–trend that is emerging across Europe: as economies struggle and the poor seek a scapegoat, violence against the Romani people is increasing.

On Wednesday, France’s railway strike entered its eighth day, making it one of the longest in recent history. Workers are protesting a bill that came up for discussion in the National Assembly on Tuesday. The bill proposes reforms to the railway system that aim to unite the national company responsible for French railway infrastructure RFF (Réseau Ferré de France) and the national company responsible for managing the trains SNCF (Société Nationale des Chemins de fer Français). Although the reform wouldn’t have any immediate negative effects on workers, railway workers fear that it will eventually lead to job losses since the RFF is heavily in debt.

The movement is spearheaded by 2 unions: the CGT (General Confederation of Labor) and the SUD (Solidaires Unitaires Démocratiques). President of the CGT Thierry Lapaon declared, “Thanks to our action, amendments have been filed and it seems at this time that the government is taking into account the balance of power which has occurred.” Determined not to give in, the railway workers on strike vote at the end of each day whether or not to continue the strike and there are now more than 11,000 participants.

The reduced number of trains isn’t just extremely inconvenient–it’s expensive. So far, the strike has cost SNCF over 80 million euros. The protesters want the government to stop the bill and take on the RFF’s debt, and if they don’t get it, the combined RFF and SNCF are going to have to come up with a lot of money, likely leading to the layoffs that the workers are trying to avoid.

The Bygmalion Scandal: Bad News for Sarkozy & the UMP

The UMP (Union for a Popular Movement), France’s center-right political party, has been trying to keep the Bygmalion scandal on the back burner since February. But despite their efforts, a cascade of revelations has the story at a full, rolling boil.

The scandal: Bygmalion is a PR firm that worked very closely with Sarkozy’s 2012 campaign, largely due to the fact that it is owned by Jean-François Copé’s close friends. Bygmalion puts Sarkozy’s spending at around 33 million euros, but documents leaked by French online investigative journal Mediapart puts the total spending closer to a whopping 39 million euros. Even this seemingly extravagant total, however, is mere pocket change in comparison to what US presidential candidates spend: Barack Obama’s total spending for his 2012 campaign was 985 million dollars!

Things are looking very bad for the UMP. Not only was leader Jean-François Copé forced to resign earlier this month, key player Jérôme Lavrilleux (director of UMP leader’s office, former vice-director of Sarkozy’s 2012 presidential election, and recently elected MEP) admitted on television in late May that some of the campaign expenses had been passed off as general UMP costs. Lavilleux was at the OCRGDF (Central Office of Financial Crimes) for questioning all day on Tuesday.

In addition to Lavrilleux’s confession, Bygmalion’s lawyer Patrick Maisonneuve claimed the PR firm was “forced” to participate in the financial fraud covering up the extreme expenses of Sarkozy’s campaign. With these two affirmations, the numerous leaked documents demonstrating how Bygmalion falsified bills to cover Sarkozy’s campaign costs hold more water. In short, this is a big mess for the UMP — which means some serious clean-up work will have to be done if Sarkozy wants to even attempt a comeback in the next presidential election.

Read more about the key players and leaked documents at Le Monde.

From snail mail, to telephone calls, to emails, to texting, to snapchat, to instagram… technology has brought us countless ways to communicate what we’re thinking, feeling, and seeing with each other. But now, we can send each other what we’re smelling. Paris and New York based company Vapor Communications has just unveiled its new technology, oPhone, that lets you send smells via SMS text messaging.

How it works: take a picture of an especially fragrant flower or steaming hot coffee. The iPhone app oSnap lets you tag this photo with any of it’s programmed scents (there are currently 32 primary scents, which can be combined in all different ways to create 300,000 scents). The data is sent by SMS, and then received on an oPhone, which recreates the smell for you.

Sounds crazy, but does it actually work? Yes! On June 17th co-founder Harvard Professor David Edwards sent the first smell (champagne and a passion fruit macaroon) all the way across the Atlantic Ocean from New York to Paris. The company is trying to raise $150,000 on Indigogo to fund production of commercial oPhones. “They say a picture is worth a thousand words,” Professor David Edwards says, “now, a scent is worth a thousand pictures.”

For France, a New Map Means a New Election Day

France’s regional elections are usually held in March, but in 2015, voters will have to wait until December to hit the polls. The reason for the delay? The new bill that plans to merge several French regions and therefore reconfigure France’s interior political borders.

The new round of elected officials in regions unaffected by the bill will meet the Monday after the elections, while the officials in the newly merged regions will not meet until Monday, January 4th, 2016.

Although this is not the first time that elections have been rescheduled, the change of date emphasizes the fact that an integral part of France that affects all areas of life–economic, political, cultural, historical–is about to change.