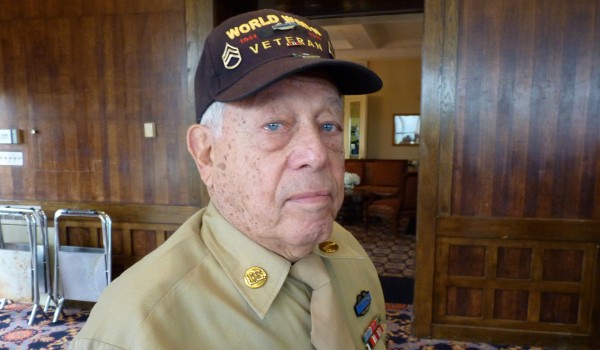 “I remember that day clearly. The water was over my waist as I carried the injured in my arms toward the beach,” recalls Joseph Chiofolo trying to hold back the sobs choking his voice.

Last Friday, Chiofolo was one of 34 American World War II veterans assembled at Westpoint Military Academy to be decorated with the Knight of the French Legion of Honor medal. The former warriors, now in their 80s and 90s, were honored for their combat efforts in Provence, the Ardennes, and Normandy. Among them, a few witnessed the historic and bloody landings in Normandy.

On the morning of June 6, 1944, at 22 years old, Chiofolo landed at Omaha Beach. Originally from New York, he was part of a medical unit in the U.S. army’s first infantry division, and he remembers his overwhelming feelings of helplessness in the face of such devastation. “Within 20 minutes, we had run out of equipment and penicillin. I tried to help those who were on land, but there were just too many,” he says. “I’m a survivor. I was blessed by God. How many soldiers who participated in D-Day still remain?” he asks looking around.

The ceremony was organized by the French Consulate in New York to commemorate the 70th anniversary of the Normandy landings. For the occasion, the veterans all came in uniform, some complete with medals and service cap. A number of them walked steadily, while others leaned on their canes or walkers accompanied by their children or grandchildren.

“Those who gave their lives on the beaches are the ones who should be decorated,” added Joseph Chiofolo. Shaken with emotion, he hung onto the arm of his wife Joséphine, “the love of my life.” She waited for Chiofolo for two years while he was deployed to Sicily and then to Normandy. “Our daughter Teresa was born just before I left. It was hard, and we seldom got any news. Letters arrived in packs of ten,” Chiofolo recalls. When he returned, he spent the rest of his life working in New York as a jewelry manufacturer.

John Monaco reached the Normandy coast a few days after Chiofolo. “I was bubbling with enthusiasm. I was 20 years old and had just graduated from high school. I left laughing and upbeat, while my parents wept,” remembers the New Yorker. “But once our troops landed, everything changed. I’ll never forget the image of a young German who had died and was left half buried. It opened my eyes to what was really happening. My excitement vanished. We were surrounded by destruction. I felt fear as never before, and I broke down in tears all the time. The army had trained us to kill, but nobody knew how to deal with death,” he explains wiping away the tears spilling from his eyes.

John Monaco returned to New York in 1946 a lost man. It took him three years to find his way and resume work as a construction painter. Haunted by his memories, he underwent therapy. “What really helped me was to be able to put things down in writing. I highly recommend this to all veterans: write down your memories. I wrote poems, and that’s what helped me get through it.”