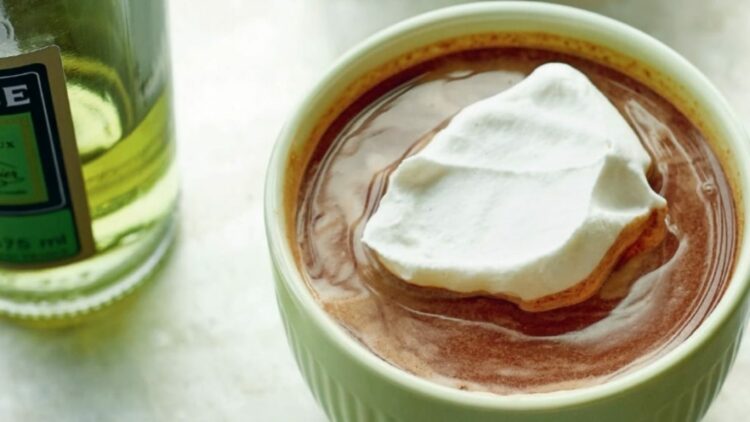 By this time in January, most of us have tried to be good, dry and gluten-dairy-soy-chocolate-sugar-avoidant people for at least ten days. But right about now,  it can start to feel like a great time for a hot cup of cocoa. I mean let’s face it, that Christmas toffee was weeks ago now. And a little cocktail over a bleak January weekend never hurt a diet, did it? Even better, what if you could combine the two, a two-fer, so to speak. And what if that cocktail were made from something the French say is actually medicine?

To sweeten the deal, your milk can come from an organic cow that was tickled between the ears as it was milked; your sugar, vanilla and chocolate can all be organic, fair trade and non-rainforest-spoiling. Bien sûr, your Chartreuse will come from those very pure monks who have spent a good deal of time foraging and then macerating the 130 medicinal herbs that go into their timeless liqueur. They have then distilled it in beautiful, non-plastic and huge copper pots and aged it in charred oak barrels.

The purest “Green Hot” or, Vert Chaud (or, as some people call it, the Après Ski, meaning a drink to soothe and lubricate your weary bones after you’ve been ricocheting down snowy French slopes),  is just thick hot chocolate and a little splash of Chartreuse. Some people add in a splash of bourbon, but you don’t have to, because, honestly, it’s American bartenders that do that–and the French amongst us might claim that you’re just getting all showy and American and are gilding a lily.

Below is a video that shows you how to make a simply lovely Vert Chaud (use our bittersweet hot chocolate recipe, here) and then top it up with a little Chantilly whipped cream and a dash of cocoa. You won’t regret it. Live a little! January comes but once a year.

Caitlin Shetterly is the Editor-in-Chief of Frenchly. She is also the author of 4 books: Fault Lines, Made for You and Me, Modified and the upcoming novel, Pete and Alice in Maine, which will be published on July 4th, 2023 by Harper Books. She is a native daughter and she lives with her two sons and husband in an old house on the coast of Maine.