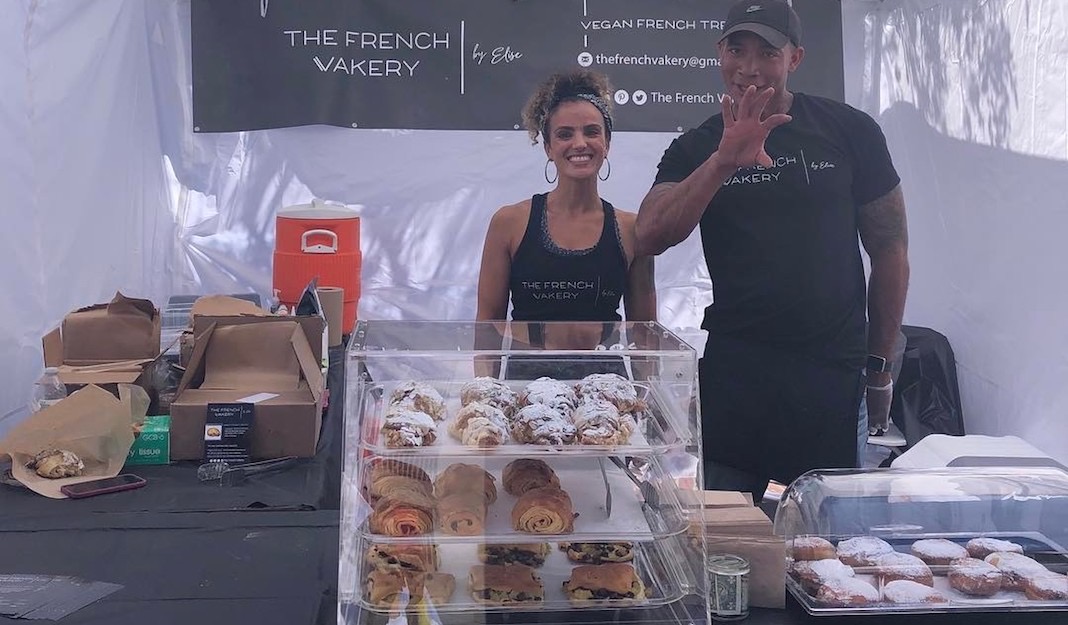 An endless line of customers, with eyes than shine at the prospect of eating The French Vakery’s croissants, all waiting at a stall that sells out very quickly. For its first sales on Bastille Day in San Francisco this summer, the success of their viennoiseries was undeniable, to the great joy of the creator, Elise Duplechan.

The native of Nantes has only just entered into the realm of bakeries. Before moving to California a year ago, she was a hairstylist in Rio de Janeiro, Brazil. “When I arrived here, I was looking for another field where I could make a profit from my skills as a business developer, and I wanted that to be in conjunction with French cuisine.”

Duplechan’s move to the US coincided when her conversion to veganism, the result of a quest for a healthier lifestyle. It’s due to the Vegan Street Fair that Duplechan had the idea: “The stall where the line was the longest was selling donuts! At first, I found it a very basic concept, then the idea came to me: I selfishly thought about what I needed most in my vegan diet, and croissants were at the top of the list. I was going to be able to combine my French origins with a lifestyle and create a business.”

Thanks to videos found on YouTube, and the love of good cuisine instilled in her by her mother and grandmother, Duplechan has thrown herself in the venture The French Vakery. “I tried many times before arriving at a satisfactory results: the raised puff pastry takes several days to make, and that took me many tries before finding a good composition and a perfect bake.”

The choice of ingredients is also of utmost importance to the baker. “All the ingredients that I use are organic and vegan. I am often asked what I use in place of butter; I use margarine based on vegetarian oils, from coconuts or cashews.” The inventory of French Vakery boils down to several signature products: croissants, pain au chocolat, and beignets filled with apple compote or homemade Nutella. “I don’t skimp on the garnishes, especially the almond cream in the almond croissants or the pastry cream in the brioche suisse.”

Since July, Duplechan has been baking for a series of markets and festivals. The success is hardly lacking, and French Vakery’s pastries are literally being torn apart by customers. “I generally make 200-300 per event. if I made 500, I would sell them all,” assures the entrepreneur. “But I work alone, with an often infernal rhythm, and I have to work at night to bake my pastries at around 3:00 or 4:00 a.m. to guarantee their crispness.”

Despite the imminent arrival of her baby, Duplechan is formulating ideas for the future of The French Vakery: “I want to form teams in order to expand The French Vakery, a bit like the style of the brand Paul in France. I also am considering making pastries for weddings, or large events, while putting the value on the classics of French gastronomy, like mille-feuilles, the Paris-Brest, the Trianon…” She has already received numerous propositions to open bakeries from Dubai to LA, but she won’t be doing that any time soon. For now, she’s focused on the baking.