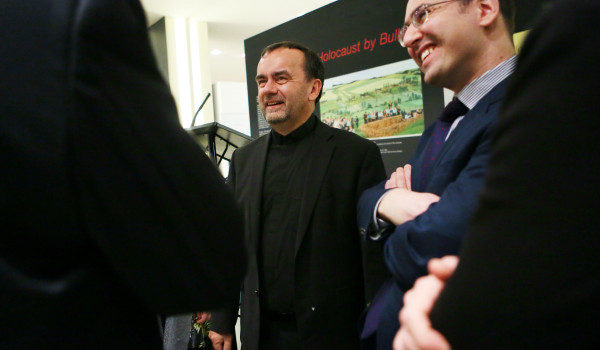 At The UN, Father Desbois Is On A Mission Against Genocide

The “Holocaust By Bullets” is the name for the hidden extermination of two million Jews in Eastern Europe between 1941 and ’45. Patrick Desbois, a French priest, has made the illumination of that shadow massacre and others his life’s work.

Father Desbois was at the United Nations in New York on Monday it unveil an exhibition showcasing testimony of this largely unrecognized atrocity that took place mostly in remote corners of the Ukraine and Poland, away from the world at large. “We can’t build a future by staying silent about the massacre of two million Jews and Roma,” he told a small group of diplomats and descendants of Holocaust survivors in attendance at the private viewing.

Father Desbois immersed himself in that dark page of history by traveling to the Ukrainian village where his grandfather had been interned in World War II. The Einsatzgruppen massacred many Jewish people there—but no memorial to their lives or deaths exist. Amassing evidence throughout a meticulous investigation, Desbois’s gorup, Yahad-In Unum, discovered 1,700 mass graves scattered across Eastern Europe and received accounts from 4,400 people, including survivors and witnesses “who were talking about this for the first and last time.”

“There are other undiscovered mass graves, because we have one million Jews still to find, not to mention the Roma,” Desbois said.

The exhibition, on view in the U.N. hall until February 10th, is part of the organization’s commemorative events concerning the Holocaust, culminating Wednesday with the ceremony marking the 70th anniversary of the liberation of Auschwitz. The arrival of the exhibit, which includes photos and eyewitness accounts, was supported by the French Mission To The U.N. and Ambassador François Delattre, who described himself as a friend of Father Desbois, who he calls “one of the people I admire most on Earth.”

For Father Desbois, the exhibition helps to “raise international awareness. All it takes is one well-placed individual aware of the problem for things to change.”

In front of the guests, Desbois recalled the abominable conditions in which the Jews of Eastern Europe were killed while gathered together to be taken to Palestine—and then shot dead in cold blood by German officers who had been authorized to rape their victims the day before the massacres. “The executions were held in public. Newspapers announced it. It was as if it was a show.”

“The Jews couldn’t have done this work for themselves. We had a priest from outside the community, to ask questions and give them a sense of security,” said David Black, the president of the American Friends Of Yahad-In Unum, a group basesd in France that partly finances the association’s activities

The next mission for the peaceful preist? Iraq. His association is collection stories documenting the killing Yazidis, an ethnic and religious group persecuted by Daesh, the Islamic State. Father Desbois will visit Iraq for the fourth time to “gather evidence of the genocide,” interviewing “girls who have been raped and boys who have been trained in camps.”

“There is a great urgency,” he added.

“The problem is that genocides are seen as events that move people, that the media covers, but not as something stoppable. It’s as if we discovered AIDS, and we said, ‘Well, no, we’re not looking for a treatment.'”