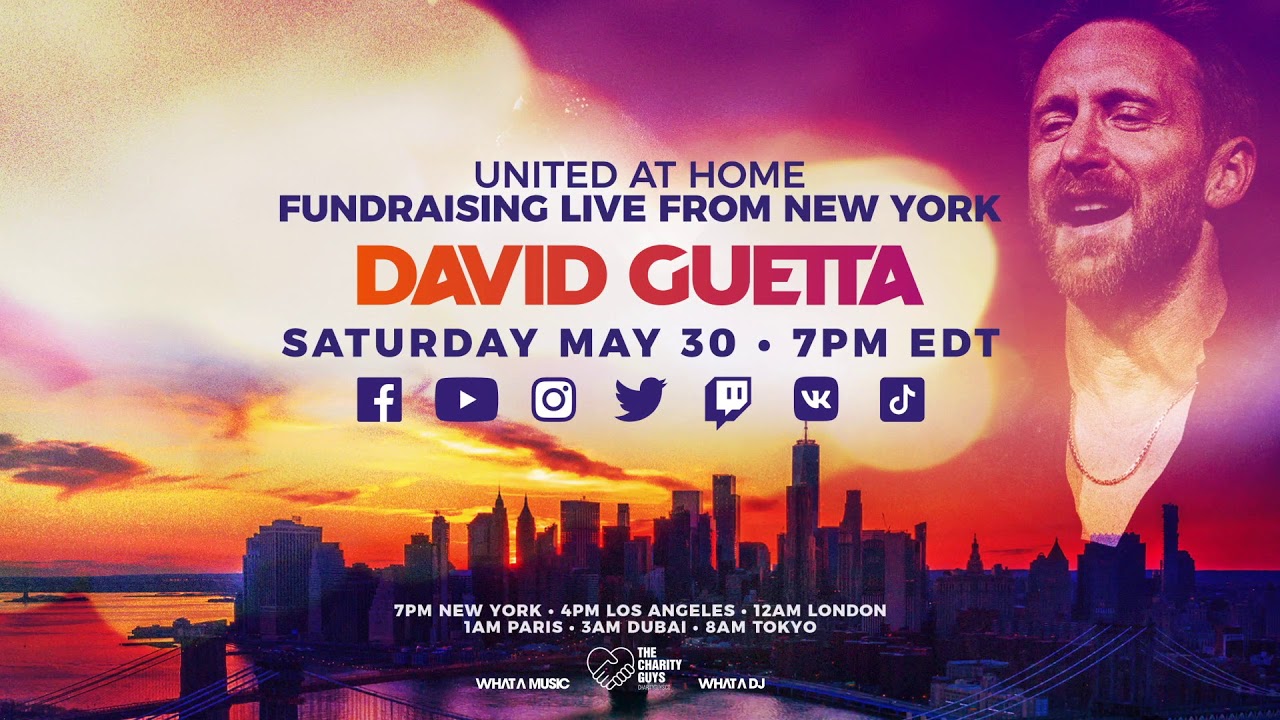 We are living in the great era of accessible digital streaming content, which has created an incredible scenario in which you can attend free concerts by your favorite performers no matter where in the world you happen to be.

The big concert for this weekend is, of course, the United At Home fundraiser put together by French DJ extraordinaire David Guetta, which will be streamed live from a secret “iconic” location in New York. The event will benefit local and international charities like The Mayor’s Fund to Advance New York City, Feeding America, the Fondation Hôpitaux de Paris – Hôpitaux de France, and the World Health Organization.

Back on April 18, 8,000 locals danced from their balconies in Miami to Guetta’ first United at Home event. Guetta contributed $300,000 to charity, and raised a total of $750,000 over the hour and a half performance.

Tune in for the bigger and better New York sequel on Saturday, May 30, at 7pm EST on Facebook, YouTube, Instagram, Twitter, Twitch, TikTok, or VK. The event is set to begin right after the “daily clap” for essential workers that has taken place in NYC every day since quarantine began in late March. He has promised to bring on City First Responders and other surprise guests.

New York’s First Lady, Chirlane McCray, who chairs the Mayor’s Fund, thanked Guetta, “for his partnership to help the city continue to raise funds for PPE and other critical supplies to protect our healthcare heroes during this public health crisis.”

Of his choice of venue, the born and bred Parisian said, “New York is one of my favorite cities and it’s an honor to be able to do something to help the city during this difficult time…. As a DJ, the crowd is the most important part of any show and though we can’t be together at a club or at a festival, we can use this time to come together in new ways and help those who need it most.”

You can of course expect to hear some of the DJ’s hits from over the years, including “Titanium,” “Sexy Chick,” and “I Got A Feeling.” But we also know that Guetta will be opening the night with a remix of a famous New York song, and that he will be trying to play versions of his hits that “people cannot hear when they listen to the radio.” The performer has encouraged everyone to give, even if it’s just a little bit. “It doesn’t have to be $10,000.”

So show up, dance your heart out, and give what you can.