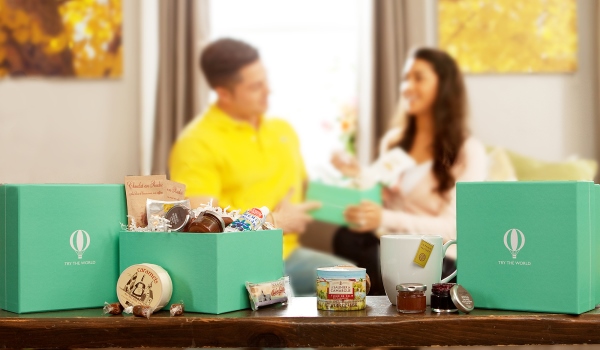 Try the World: Let the World Come to You

(Sponsored content) Instead of spending tons of time and money traveling around the world, why not have it delivered directly to your door?

That’s the idea behind Try the World, a box subscription company that delivers culinary and cultural surprises from a different country directly to you every two months. Just signing up will get you on your way to discovery the best the world has to offer.

The two travel enthusiasts responsible for Try the World are Frenchman David Foult and Russian Kat Vorotova. They met as students at Columbia University, both having traveled abroad extensively and came to the same conclusion.

“When you’re looking for products you’ve tried in other countries, they cam be very hard to find in the US,” says Foult. He decided  he wanted to “allow anyone to try specialties from any country in a simple and fun way.” Try the World was born in 2013.

“People were really excited,” recalls Foult, “It went viral very quickly on social media and in the press like on the Huffington Post, TechCrunch, CNN. That really allowed us to take off.” They followed up with boxed dedicated to Argentina, Japan, Morocco, Italy and Brazil.

Subscribers have a choice between two-, six-, or 12-month subscriptions. Soon they begin receiving their boxes, crafted by renowned chefs from each featured country. Also in the box are cultural guides with information on each country, as well as book and film recommendations and even recipes.

“You discover a culture through its food but also its art,” says Foult, “For example, our Japan box is dedicated to the discovery of the tea service.”

“You can get the boxes as a treat for yourself, or as an educational experience for your kids who’ll discover a new country,” he says, “or you can use them to inspire a theme dinner for friends or a romantic dinner for a special someone.”

Today, Try the World has a special buy-one-get-one-free offer for French Morning readers who will get a free Paris Box, the contents of which are also available on the Try the World e-shop.

What’s in the future? The founders are currently dreaming up a subscription based on regions.