Yellow, green or polka dot; which jersey will you choose?

Between 1,000 and 1,500 participants will traverse more than 80 miles of l’Etape, and ascend the 11,000 ft incline. The cyclists will race over the northern mountain routes of Los Angeles to reach the summit of an off-piste spot on Mount Baldy.

California joins the list of 15 locations across the globe, including Argentina, Brazil, Scotland, and South Africa, that replicate the Tour de France. Each Etape offers professional-grade rides through breathtaking landscapes to ultra-motivated cyclists  ready to put pedal to the metal. “With the operating license of l’Etape du Tour de France, the race benefits from promotion by an internationally recognized brand”, explains Thibuad Coudriou, a representative of Amaury Sport Organization, one of the organizers of l’Etape.

To bring the magic of the Tour de France to the California terrain, Coudriou has planned a “Tour Village” at Cable Airport (Ontario Valley, 40 miles from Downtown Los Angeles) starting Saturday, April 29th. Participants and their families can wander through sponsor booths, sample French dishes from a ronowned chef, and snack on local products, or simply stroll along a makeshift Champs-Elysées laid with surfboards, all while being serenaded by accordion music. “We have also installed an exhibition with educational panels on the behind-the-scenes of the Tour de France (what it’s like to be a rider, how the caravan cars organize),” adds Coudriou. “Bret Horton, a San Francisco-based Tour de France enthusiast, will present his collection of over 2,000 Tour-related items, including chronometers from 1903, and jerseys from the 70s.” For the finishing touch, the route will finish on April 30th with a prize ceremony, followed by a giant BBQ at the Mt. Baldy Ski Lifts. 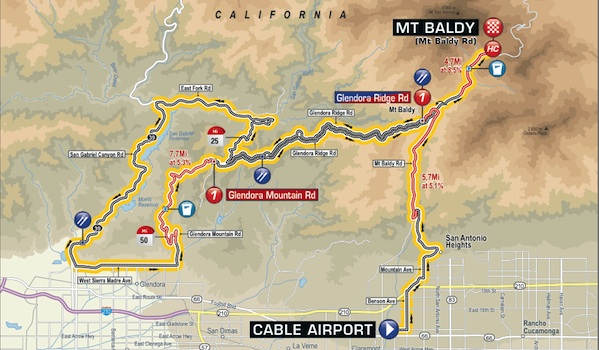 Of the 120km of the race, only three sections will be timed. “That will help us figure out the fastest uphill cyclists,” explains Coudriou. To promote the experience, Coudriou has joined forces with the French community of Los Angeles, who he hopes will come out in support. As fans storm the routes, French voices will shout encouragement to the riders, and offer messages of support along the route.
Two legendary riders will also be present at Tour Village to share their own anecdotes of the Tour de France. Having ridden in 17 Tours de France, Jens Voigt will present a critical analysis of his race performance from a technical perspective. And then Freddy Rodriguez, “one of the greatest American cyclists,” will share his thoughts on differences between cycling in the US and France.

According to Cordiou, cycling is one of the most popular sports in France, whereas in the US it is enjoyed exclusively by the upper class. “In the US, there are clubs but riders wear their bank’s logo. People who cycle do so mainly to stay in shape,” adds Ryan Ung, Cordiou’s US counterpart and director of the event for AEG.

Cordiou hopes that this event will allow Americans to experience the magic of the Tour. His goal? Signing up more Americans for the l’Etape race!