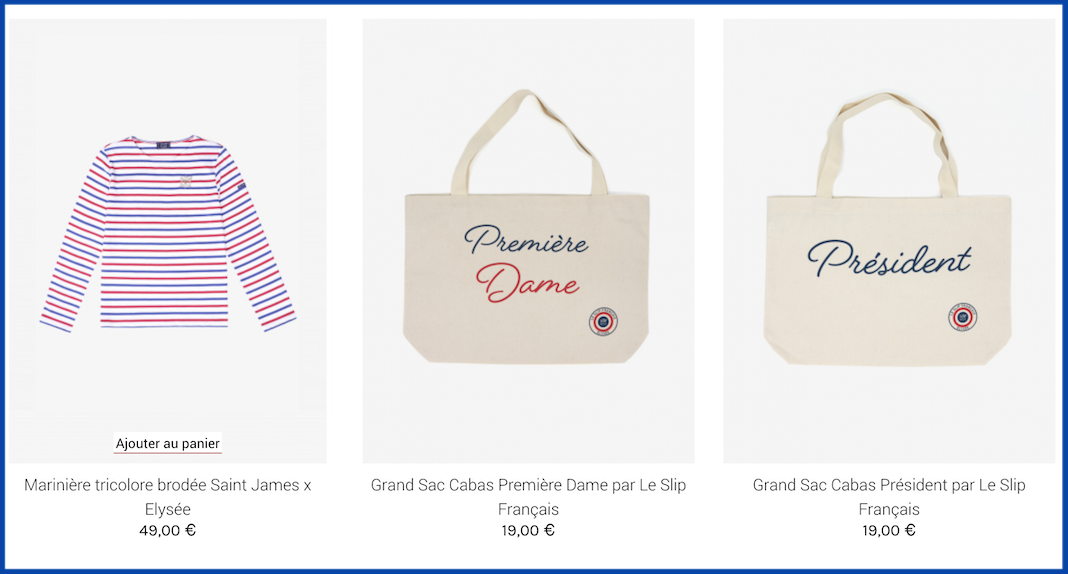 To Pay for Elysée Palace Renovations, Macron Opened a “Made in France” Boutique with Presidential Souvenirs

France may not be an oil rich country, but they’ve got other ways to make some money! At 300 years old, the Elysée Palace is in very bad shape. Crumbling moldings, electricity to be rewired, flaking paint in the salle des fêtes… Nothing looks particularly good. The plan for the presidential palace’s refurbishment has been far from a priority for several terms now. As a result, restoration is often postponed until the end of the five-year mandate… that then passes without any repair work really being done at all.

Emmanuel Macron and his wife Brigitte decided to tackle the problem head-on. With the help of an artistic director and a team of trend hunters, the couple selected “made in France” products, to simultaneously promote French savoir-faire. Thus was born the Élysée-Presidence de la République brand, which currently has about 70 items available for puchase in Elysée Boutique Officielle.

Products made for something specific of course leads to kitsch creations, such as the mug with Emmanuel Macron’s face on it or the Élysée snow globe, which costs ten euros. But we also like the plush toy of Nemo, the presidential dog. Thrify spenders will easily afford the Bic pen at 4 euros.

Creations for all budgets

In addition to companies representative of France’s patrimoine, such as Saint James and its marinière shirts or the pétanque balls of the legendary Obut brand in the colors of the Republic, there are also trendy young brands such as Le Slip Français. It’s a collection that does not lack humor. Special mention for the “Poudre de perlimpinpin” (snake oil) sweatshirt, referencing the antiquated phrase Macron used in a 2017 debate that hadn’t been used on TV since 1979, and the canvas bag with a graphic print ”Première dame.” Not to mention, for children, the OMY coloring kits. Among the best-sellers, the LIP watch (169 euros), made in Besançon, with its elegant blue-white-red Nato bracelet, which is often worn by Macron.

Among the other brands that have joined the fray: Atelier Paulin, Pierre Hermé, Duralex, Léon Fam, Le Sac Citoyen, Dejean Marine, and la Maison du Carnet. The Boutique de l’Élysée also aims to promote French savoir-faire, from the most traditional to the most modern, and to reward French talent by promoting young creators.

Each season, new brands and collaborations will expand the selection. All of the shop’s profits will be allocated to the Elysée Palace’s restoration projects. Work began in the summer of 2018. The initiative has already raised more than 90,000 euros in a few months. The shop, exclusively online, goes from virtual to physical during Journées du Patrimoine. The next ones will take place from September 13 to 15.