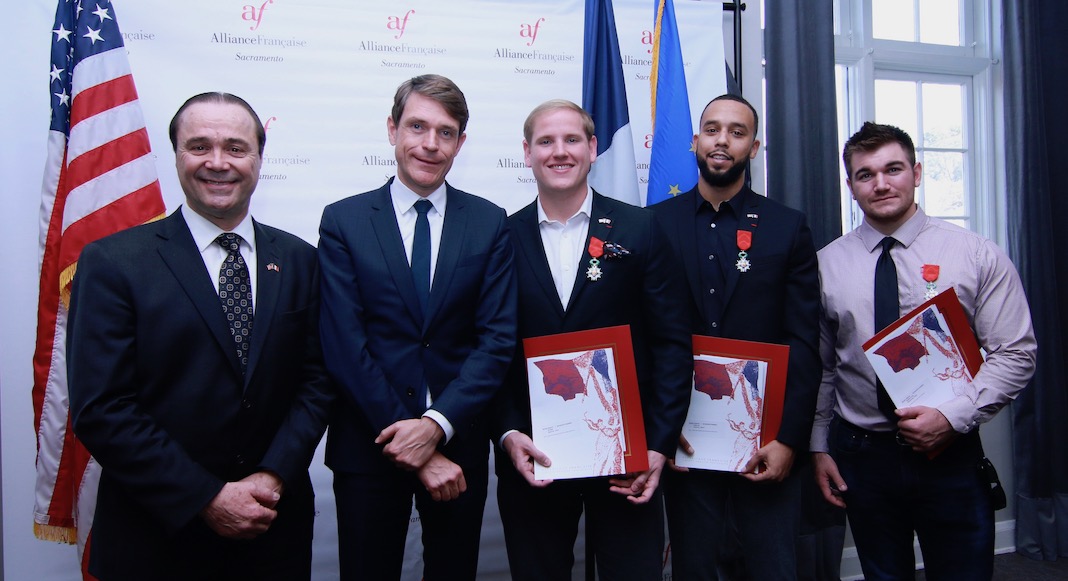 The Marseillaise playing in the Alliance Française de Sacramento has a very special meaning for Alek Skarlatos, Spencer Stone, and Anthony Sadler. It’s the anthem of the country where these three friends thwarted a terrorist attack on a Thalys train on August 21, 2015. And it’s to the sounds of this anthem that the three Americans officially received their French nationality from Emmanuel Lebrun-Damiens, French consul in San Francisco, on Thursday, January 31.

Proudly wearing the Legion of Honor presented by François Hollande a few days after the attack, they enjoyed this very symbolic moment: “I can’t believe it, we’re really French,” Stone exclaimed to French Morning.

This new citizenship is not awarded as a reward for their heroism: the three friends, originally from California, began the naturalization process themselves about a year ago. “En route from Amsterdam, the train had been moving in France for ten minutes when the attack occurred. We had never been to France before, and of course our ties with this country have only grown stronger since the event,” says Skarlatos.

Commemorations and honors, filming the movie “The 15:17 to Paris,” promoting the film… the number of trips between Sacramento and France has increased dramatically in the last three years. “To the point that you already felt French before you became a citizen,” says Stone. “When we asked Guy Michelier, the Honorary Consul of France in Sacramento, if we could become French, he helped us in our efforts and greatly facilitated the process: it only took us one year, whereas the process is usually five years, with an obligation to reside in France.”

With their new passports, Skarlatos and Stone plan on moving to France, at least for a few months: “First priority: learn French!” they joke.

Both of them see obtaining French citizenship as an opportunity to close the Thalys chapter of their lives and and start a new one. “The last three years have been swallowed up by the attack and the attention that our actions have attracted. It’s time for us to move on,” says Skarlatos. Stone adds, “I don’t want my life to be entirely dictated by this event: we saved lives, including our own, but we had no choice, we had no way out of this train, we had to take action. Two months after the attack, I was stabbed in Sacramento outside a bar, I could have died, but I survived. For me, it’s a real sign that I still have a lot to live for.”

Among these future projects, an acting career particularly attracts Stone and Skarlatos. In 2017, film legend Clint Eastwood offered the Thalys heroes an unexpected experience by recruiting them to play themselves in “The 15:17 to Paris”, an adaptation of the book they had written about the attack. “We were asked only one week before the shooting began if we wanted to act in the film. It was an offer we couldn’t refused. Acting is not our profession, and the experience was difficult, but since we played our own roles, the film gained authenticity,” explains Skarlatos. He left the US National Guard in 2017, and continues to go to auditions.

Stone also put his military career in the Air Force on hold, moved to Hollywood, and started auditioning. “Anything is possible: we could sign a new contract with the army, our dual nationality not being an obstacle to that, or spend some time in France and try to work there, maybe in real estate.” All three just 26 years old, the heroes of Thalys have heads full of projects and a determination to resume life as normal.