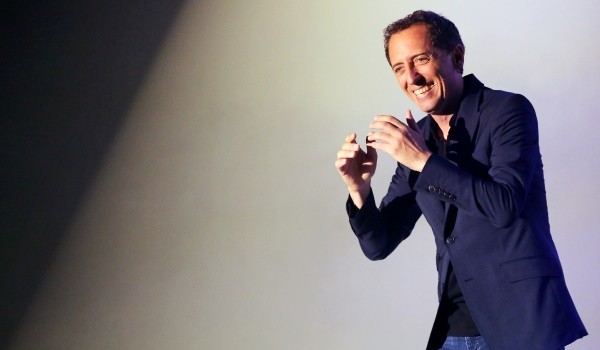 This Fall Gad Elmaleh Switches to English for You

They call him the “French Ben Stiller”… and he has no idea why. “Maybe it’s the comedy thing?” says Gad Elmaleh, a French actor and stand up comedian who has only rarely performed in the US in English — until now.

Elmaleh shared exclusively with French Morning that he’ll be doing a show entirely in English in New York for ten days this September. You’ll be able to catch him at the small-yet-mythical venue Joe’s Pub.

You may recognize Elmaleh from his appearances on the big screen in films like Tintin, Midnight in Paris and Priceless, but this will be the comedian’s first time performing stand-up for such a long stretch in English.

See a clip from a 2014 performance in English at the Los Angeles Comedy Club:

For his Joe’s Pub engagement, he’s hoping is mentor and spiritual father Jerry Seinfeld might come see him. “I talk to him a lot,” Elmaleh says of Seinfeld, “I always tell him that he should come and perform in Marseille in French!”

Something of an expat himself, Elmaleh has had a home in Los Angeles for a long time but just sold it. He is looking forward to spending time in New York. “I’ve moved around a lot in the US and the city that fits me best as a Franco-Moroccan comedian is New York.”

While he isn’t keen on divulging his material, Elmaleh does clarify that he isn’t performing in English in hopes of making it big. “I just want to feel alive,” he says, “I wanted to get excited about a new project.”

“At some point you start to feel like you’ve done it all,” the comedian told French Morning, “I’m so grateful to my thousands of French fans, but now I need to live a little bit dangerously.”

On June 16th, Elmaleh will perform in French at the Beacon Theater, where he appeared nearly ten years ago before a crowd of 3,000. “I wanted to go out with a bang,” he said, “It will probably be one of the last shows I perform in French in the US.”

For this last sendoff with his French expat fans, Elmaleh will do a show that deals with “adaptation and expatriation” and he may even give a taste of what he can do in English. After all, he’s hoping they’ll do a little promo for his Joe’s Pub run: “I’m counting on French expats to bring their American friends,” he says.