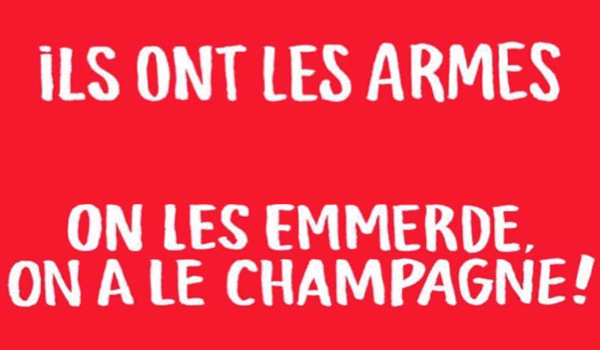 “They Have Guns. Screw ’em, We’ve Got Champagne.”

Just over ten months after their offices were targeted by terrorists, leaving twelve people dead, and not even a week after Friday’s attacks in Paris, satirical paper  is boldly taunting terrorist ideologues with their latest cover.

As Parisians returned to the sidewalk cafés and bistros of the city in defiance of terror, proudly declaring #TousAuBistrot and #JeSuisEnTerrasse, Charlie Hebdo released its latest cover, featuring a man drinking champagne that pours straight out of what one assumes are bullet holes, although the alimentary canal does not, generally speaking, extend to the legs.

“They have weapons,” the caption around cartoonist Coco’s illustration reads. “Screw ’em. We’ve got weapons.”

The former offices of Charlie Hebdo were attacked on January 7th of this year, with Al Qaeda’s Arabian peninsula chapter claiming responsibility for the shootings in “revenge for the honor” of the prophet Mohammed, whom the magazine had desecrating by illustrating. While Muslim artists have depicted the Prophet for a millennia, it is considered sacrilege by some to verge on idolatry by creating representations of any prophet—which technically includes Jesus—making, one imagines, Christmas and Easter especially trying times for hard-line extremists.

In his weekly editorial, Hebdo managing editor Riss said, “Without realizing it, the Parisians of 2015 have sort of become the Londoners of 1940, determined not to yield, neither to fear nor to resignation, whatever catches them off guard.”

“Avoiding the pitfall of division should not make us renounce the right to criticize religion on the pretext that its exercise is sometimes irritating,” Riss continued. “Among all the basic freedoms that make up our lives, it is also  freedom that the killers wanted to eliminate this Friday evening.”