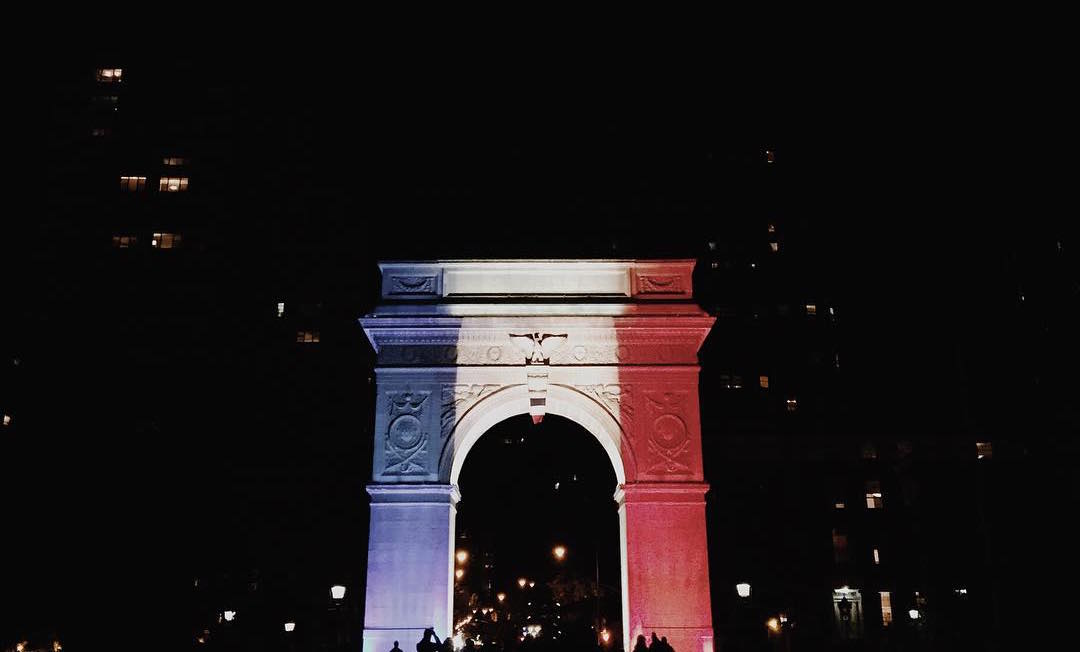 The World Reacts To Paris Attacks

In the days following the attacks of Friday the 13th, people in cities and countries across the world came together to show solidarity with Paris and the French people, to celebrate life and light in the wake of acts of unspeakable darkness.

In New York City, over a thousand people held vigil in Washington Square Park, hoisting French flags and singing “La Marseillaise,” France’s national anthem.  Mayor Bill de Blasio was on hand at the gathering, saying that “New Yorkers are joining together to remember the Parisians whose lives were tragically taken in yesterday’s attacks” in what he called New York’s “sister city, Paris.” De Blasio ordered flags in the city to be flown at half-mast out of respect for those killed in the attacks.

The Empire State Building was dark for two consecutive nights, while the spire atop the new One World Trade Center was lit up with the colors of the French flag. Governor Cuomo declared that the colors would be displayed through the weekend.

Further uptown, the Metropolitan Opera augmented their repertoire for the night with a rousing, pitch-perfect rendition of “La Marseillaise” before a matinée performance of Tosca.

In Miami, Floridians and the French came together to mourn the victims. Christelle Caron, a native of France who grew up outside of Paris, told the Miami Herald, “We are in shock.” She went on to call the attacks a “cowardly act.” Philippe Létrillart, the Consul General of France in Miami, told the crowd, “We do not have enough candles for all the people who died yesterday,” before asking for a moment of silence for the fallen.

In Los Angeles, the French Consulate in Century City hosted a rally of hundreds who contributed to a memorial of flowers and candles, with the Consul General calling for mourning and reflection. Nohemi Gonzalez, a 23-year-old student from Cal State Long Beach, was killed in a restaurant on Friday night while dining with fellow students from the school. “She was kind to everyone,” a high school friend told the Los Angeles Times. “A remarkable and unforgettable person. The world lost such a beautiful, shining light.” Gonzalez’s Cal State friends have all been reported as safe after the attacks.

In Philadelphia, the City of Brotherly Love and home to America’s greatest francophile and the first US Ambassador to France, Benjamin Franklin, two vigils were held in the city’s famous Love Park, and buildings around town were lit up with the colors of the French flag.

In Washington, DC, the vigilant surrounded a statue of Major General Marquis de Lafayette in the eponymous square outside the White House.

In London, the Tower Bridge became a temporary French flag and crowds gathered in Trafalgar Square, with the French flag flying at half-mast at 10 Downing Street.

In Berlin, the famous Brandenburg Gate, adjacent to the country’s French Embassy, was awash in the colors of the French flag and swarmed with people mourning the victims, lighting candles, and adding to a growing memorial.

In Sydney, mourners from Australia and France gathered in Martin Place, the site of one of three vigils held in the city, some sharing umbrellas and all taking comfort in solidarity. The Sydney Opera House was painted with the blue, white, and red of the French flag.

In Rome, people came together for a candlelight vigil in the Piazza del Popolo, singing the French national anthem and praying for those affected by the attacks. Pope Francis condemned the attacks in Paris, calling the use of God to justify violence “blasphemy.” “The road of violence and hatred does not resolve humanity’s problems,” the Pontiff added.

In Tel Aviv, Rabin’s Square was the site of a vigil in the shadow of the municipal building, its rectangular façade a picture-perfect representation of the French flag.

In Jerusalem, the Old City Walls were illuminated in solidarity with France.

In Tehran, around a hundred Iranians stood in front of the French Embassy to hold a candlelight vigil, posting notes of condolence and solidarity on the building walls.

In Hong Kong and Beijing, scads of people from Asia and abroad joined together for their own vigils, while in Shanghai, the Oriental Pearl Tower was emblazoned with blue, white, and red lights.

In Paris, the Eiffel Tower went dark in the wake of the attacks, a stark symbol in the City Of Light. President Françoise Hollande declared three days of national morning, a twelve-day state of emergency in France, and promised that the country would be “merciless” in responding to what he called “an act of war.” A massive manhunt is underway in Europe to capture at least one suspect believed to be directly involved in the attacks Friday.

On Sunday, as many as 20,000 people gathered in Copenhagen to mourn for the dead and show their resolve to champion life and the living. “What is the strongest response we can have?” Denmark’s Prime Minister, Lars Lokke Rasmussen, asked the crowd. “To keep on living, and to refuse to be intimidated. If we no longer dare to sit at a cafe terrace, then we have lost. We insist on defeending democracy and the joy of living.”