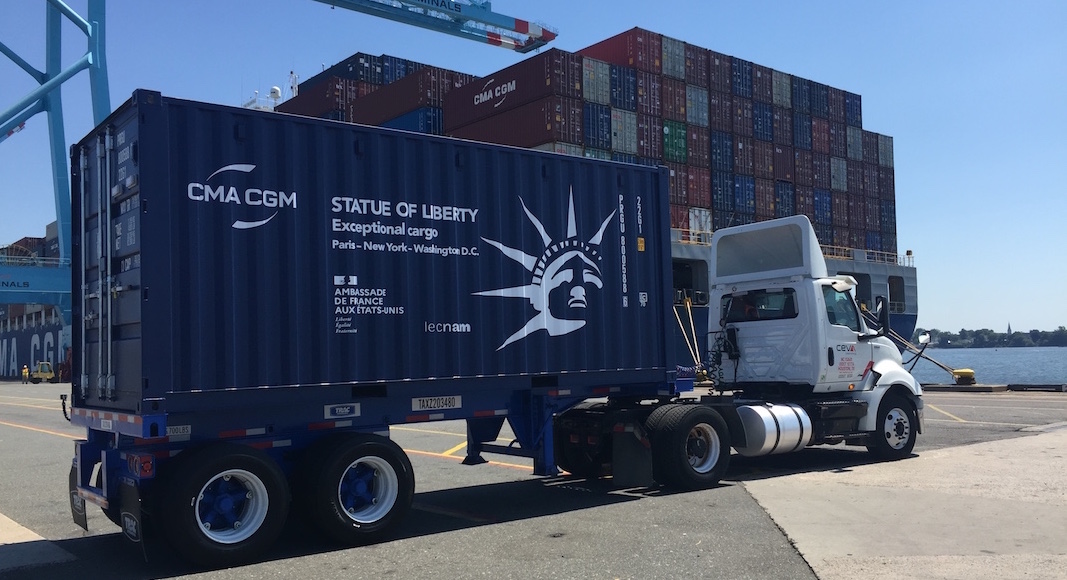 The Statue of Liberty’s ‘Little Sister’ Has Arrived in New York!

New Jersey Governor Phil Murphy, French Ambassador to the United States Philippe Etienne, and other dignitaries in their finest attire… There is quite a crowd this Wednesday, June 30, on the docks of the Port of New York-New Jersey in Elizabeth (New Jersey), to welcome the “little sister” of the Statue of Liberty, a ten-foot-tall replica of Auguste Bartholdi’s famous statue.

Standing behind a lectern flanked by the French and American flags in a corner of this immense port covered with mountains of multicolored containers, Edward Fox wasted no time in front of his audience, which was liquefying under the blazing sun. The American customs official signs the authorization needed to unload the newly arrived statue in front of the cameras and calls out “Vive la France!” before shaking hands with the ambassador.

At the same time, a 240-foot crane in the background grabs one of the containers stacked like legos on the CMA CGM Nerval, the ship of the French company CMA CGM that transported the small statue. It was in this container, stamped with the statue’s face, that the Statue of Liberty’s “little sister” made the nine-day transatlantic voyage from Le Havre, like her elder sister 136 years earlier. The welcoming committee will not see her: placed on a truck, the container is immediately transported unopened to a warehouse where it will spend the night. “The crossing went very well. We’re happy to see it arrive on time,” says Laurent Olmeta, executive vice president of CMA CGM America, who made the trip from his headquarters in Virginia for the occasion.

Unlike the Statue of Liberty (the original), which had to be assembled in New York over the course of more than a year starting in 1885, the instructions for its little sister are much simpler. It will be installed on the morning of Thursday, July 1, on Ellis Island, where it and its illustrious elder, erected on the neighboring island of Liberty Island, will be visible to the public. (Both islands are accessible by ferry).

She will remain on this island of transit for immigrants arriving by boat in New York during the first half of the 20th century until July 5 – following Independence Day – before moving to the residence of the French ambassador in Washington in time for July 14.

The Conservatoire National des Arts et Métiers (CNAM), whose museum had housed the replica since 2011, will loan it to him for at least ten years. “It’s very moving to see it arrive, especially when you see the size of the operation. This notion of freedom and friendship between the French and American peoples still has a very strong resonance today,” emphasizes Ambassador Philippe Etienne, who initiated the project in July 2019 during an informal discussion with CNAM General Administrator Olivier Faron.

To bring in this nearly 1000-pound statue, cast in France from Bartholdi’s original 1878 plaster model, CMA CGM and its logistics subsidiary, CEVA Logistics, left nothing to chance. Unmounted on June 7 during a ceremony at the CNAM, it was placed and immobilized in a transparent box (plexiglass), itself placed in a container equipped with sensors. In total,” concludes Laurent Olmeta, “forty people from the group between France and the United States were involved at all levels of the chain to ensure that this unique piece of art was protected.”