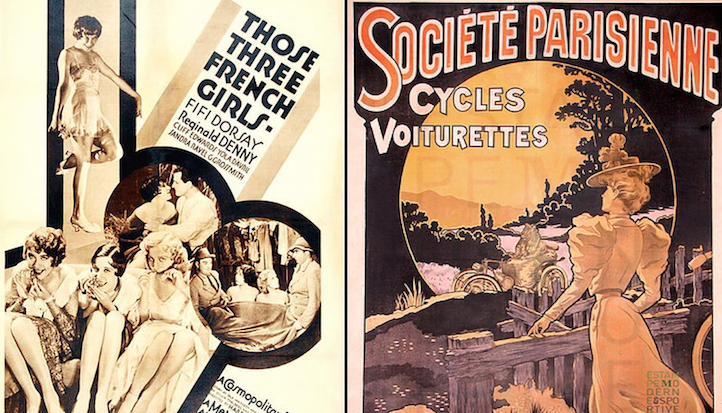 The Myth of the Perfect French Woman isn’t New, but it’s Not Getting Old Either

The secrets of dressing, eating, or raising your baby like a French woman sell millions of books and products every year. The alchemy of sexy-but-classy French women who are also ostensibly successful mothers, accomplished cooks, and innate fashion mavens has firmly captured the imagination of the Anglo-Saxon world.

Now, a class at France’s elite university La Sorbonne asks not what we can learn from French women, but from the idealization of French women itself. Held in the summer in French and English, the seminars  cover the myth and reality of French women through philosophy, literature, history and history of art, catering to an international audience of expats and students.

Professor Nathalie Duval, contemporary history lecturer at the Sorbonne, specialized in popular culture, formation of elites and youth movements, explained during her fascinating lecture on French women that the phenomenon can be traced back, to the Universal Exhibition in 1900.

The first thing visitors to Paris saw was the huge, emblematic effigy of an elegant woman, dressed in fashionable clothes and with a certain ‘insouciant’ attitude. This larger-than-life Parisienne was instantly adopted by businesses to promote fashion, beauty and luxury products that played a pivotal role in the prosperity of belle époque Paris.

Ever since then, the image of the chic French woman has remained synonymous with a certain attitude to sophistication and elegance: they can eat what they like, they don’t work out, and still they are slim, ageless, and utterly irresistible.

A century later, Mireille Guiliano capitalized on this image once again in her seminal bestseller French Women Don’t Get Fat. Her book kicked off a craze that she says is still going strong 11 years after the first release. Today, it’s being discovered by many American women particularly in their 20s and 30s.

“On the positive side,” told me over email, “lots of information has made people more aware of how important the idea that you are what you eat is, and so look for better nutrition. In [America], a country of yoyo-diets, convenience, and extremes, the solutions are far from the best. But even in the fad of drinking expensive green juice smoothies (not my idea of eating for pleasure), there is an exposure to eating vegetables, and the next phase after that might be easier, and more in line with eating well.”

As a long-time French resident and appreciative observer, I have found that indeed French women are less inclined to subject themselves to a regimented diet, and snacking between meals is rare. If they find they have acquired a little unwanted ‘rondeur’, at any age, they make small adjustments in their meals, cut down on bread, pastry or desserts for a while, but then go back to their normal menus, which tend to follow the produce of the seasons.

Meals at home, at school and at work are shared at the table, meaning that food is a social occasion, intermingled with conversation.  There is an awareness, and often a discussion, of the food being consumed and enjoyed. A shared experience means that family members, friends and colleagues can balance each other off with a gentle nudge in the right direction if anyone is being a little too ‘gourmand’.

Guiliano sees an overall positive effect of her book on American women. But some might ask whether the image of the woman who eats for pleasure without gaining weight puts undue pressure on French women to live up to impossible  standards?

“The risk for extremes is always there, “ says Guiliano, “but frankly these days I doubt anyone has the time to do it all or even attempt half.  So they may focus on their body and style as teenagers, and then move on as they go through successive stages life.”

“Even French women know they can’t have it all and they too often put work last –not something so common in America where work often trumps relationships,” says Guiliano, bursting a myth of the elegant, hard-working professional French supermom,”The ideal of having it all is more prevalent in America, where so much is possible—and not achieving the goal can be a huge blow to a woman’s self-esteem.”

Professor Duval says “while the role model of French women inspire us to dream and motivates young girls to make an effort to look after their figure, it can also be limiting because these girls don’t live in the same privileged situation with the support structure of a film star or a model. So it can be at the same time motivating and constraining.”

And physical self-improvement isn’t only a response to outside pressure — it can also boost the confidence of the wearer in a personal way. One student from the United Arab Emirates, present at the seminar, said that in his country, where many women wear the veil by choice, French-chic is a cultural model that local women emulate, wearing stylish make up and fashion under the veil, even though it is never meant to be seen in public.

Whether or not French women have a secret ‘je ne sais quoi’, the idea has served marketing and advertising of French products well for decades. As with most things, it appears to be harmless if consumed in moderation. It is, after all, an invitation to better ourselves, and to have a bit of fun –as long as it’s not taken too literally… or too seriously.