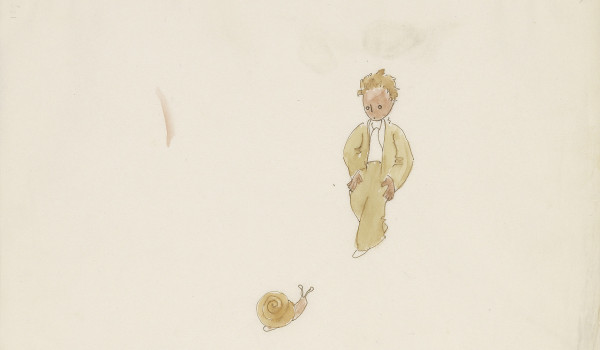 “What is essential is invisible to the eye” goes the famous quote from Le Petit Prince, Antoine de Saint-Exupéry’s beloved children’s book. Saint-Exupéry fans, however, will surely appreciate the opportunity to feast their eyes on fifteen drafts of the work on display at the Morgan Library alongside original drawings, watercolors, handwritten pages and first editions.  The library is the proud owner of the manuscript and original drawings, which they are presenting in an exhibit called “The Little Prince: A New York Story” in celebration of the 70-year anniversary of its creation and initial publication in New York.

From 1940 to 1943, Antoine de Saint-Exupéry, already a reputed writer, was exiled in New York and during this time he wrote the first and only book that he would illustrate himself.  Christine Nelson, curator of the exhibit, recounts, “As he prepared to leave New York to join the war effort as a pilot, Saint-Exupéry appeared at his friend Silvia Hamilton’s door wearing his military uniform. ‘I would like to give you something splendid,’ he said, ‘but this is all I have.’  He tossed a rumpled paper bag onto her entryway table.  Inside were the manuscript and drawings for The Little Prince.”

The Morgan Library had the brilliant idea of acquiring these treasures in 1968.  “We had much demand from people who wanted to see them,” notes Christine Nelson.  “The 70-year anniversary of The Little Prince was the perfect opportunity to organize this exhibit.  It also coincides with the recent publication of a facsimile of the manuscript by Saint-Exupéry’s French editor, Gallimard.”

The exhibit focuses on the origins and the creative process of the book, which has become the most translated work of fiction in the world.  “It’s as if we were looking over Saint-Exupéry’s shoulder while he was writing the book,” remarks Christine Nelson.  Indeed, while visiting the gallery full of original and unpublished drawings, one can imagine Saint-Exupéry writing, crossing out words and drawing with a cigarette dangling from his mouth and a coffee cup in his hand. In fact, cigarette burns and coffee stains can be seen on some drawings.  It’s easy to imagine being among his circle of friends whom he would call at 2:00am to read an excerpt and ask their opinion…

On display are well-known illustrations, such as the boa constrictor and the baobab trees, but visitors will also discover previously unseen drawings and characters that were used in the early versions of The Little Prince, or that were significantly reworked or removed from the published work.  “Saint-Exupéry was known for being disorganized,” chuckles Christine Nelson.  “But in reality, he was an extremely meticulous artist who worked relentlessly, constantly revising his manuscript.”  A comparison of the original drawings and the published pages clearly shows the work’s evolution.

Written and first published (even in French) in New York City, The Little Prince is thus a French-American character.  Certain places in New York were even mentioned in the manuscript before ultimately being edited out by Saint-Exupéry. The exhibit also reveals that Orson Welles wanted to make the book into a film (an excerpt of the screenplay is on display), but the project never came to fruition because it was unsuccessful in gaining support from Walt Disney.

The exhibit finishes on a touching note by drawing a parallel between the end of the book (on display is an alternative, darker ending that is more associated with the context of the war than the final version) and the disappearance of Saint-Exupéry on July 31, 1944.  “Like his main character, he takes to the air and never returns,” comments Christine Nelson.  Also on display is the bracelet that Saint-Exupéry wore when he died.  On it was an inscription of his last address – that of his editor in New York.