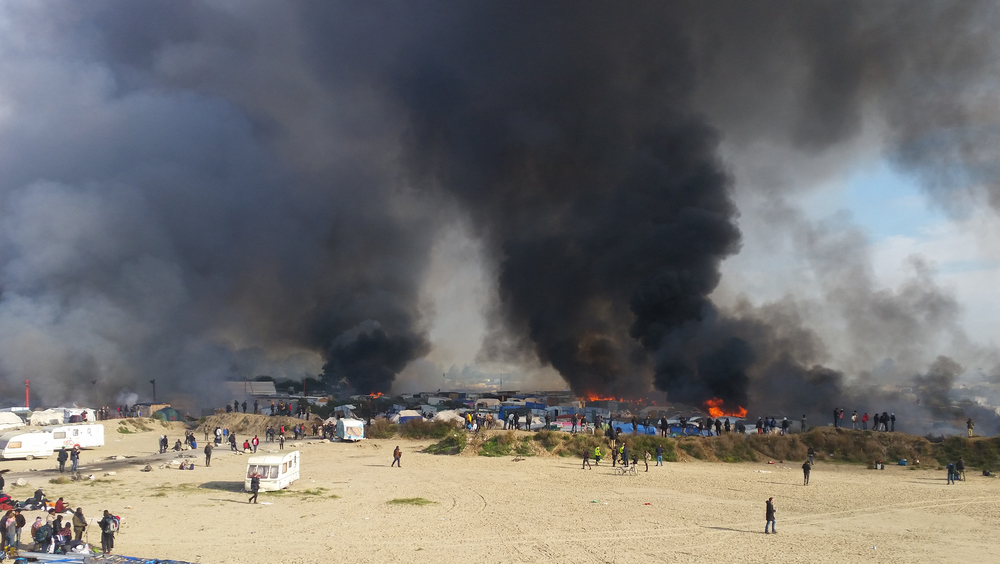 The Humanitarian Crisis We’re All Ignoring

With news in the US focused on the upcoming election, it’s easy to overlook what’s happening in the rest of the world. Here’s an update from Europe: France has bulldozed its largest refugee camp, displacing 10,000 asylum-seekers.

The migrants’ temporary home was a former garbage dump on the outskirts of the French port of Calais. The unplanned city of stateless refugees was called the “Jungle” because it was a place where people were treated like animals.

By night, the most determined took the long walk through the Channel Tunnel. Some of them never came back. The lucky ones made it to England.

The unlucky were run over, hit by a train, or drowned.

France’s socialist president Francois Hollande has declared there will never be a new Jungle, at least not on the same garbage dump. He described the massive operation as “humanitarian, dignified but also efficient and firm.”

Razing the Jungle was a political no brainer for Hollande, who is still deciding if he will seek reelection in 2017. He is an unpopular leader in a country at war with terrorism. His latest move was surely in response to accusations from the right and ultra-right that he is losing control of French borders. Last December, Marine Le Pen’s immigrant-bashing National Front – now France’s most popular party – came close to winning control of the Calais region.

In the Jungle, the ballet of riot police, bulldozers, and camera crews began at dawn on October 24. Twelve hundred riot police surrounded the favela of plywood shacks, tents and donated caravans. When necessary, tear gas was used to evict the inhabitants.

An army of 700 accredited journalists slogged through the mud alongside the refugees. “Why did you leave your country?” they asked. “Will you give up your dreams of England?”

Who are the migrants? Astonishingly, no French or British government authorities have bothered to ask until now. NGOs like Doctors without Borders and Terre d’asile have taken a census. At least 90% are male. Many are professionals who would like to work again as engineers, pharmacists, doctors, teachers or architects. Some of them are carrying their life savings in their pockets; others have already handed them over to the smugglers that brought them to Western Europe. A fourth of them are boys under the age of 18. Just as many say they have family or close friends waiting for them in Great Britain.

While some of the refugees are from Syria most are from other war-torn countries: Afghanistan, Sudan, Somalia and Eritrea. Apart from the personal hells they’ve lived through, “they have many things to say about the conflicts and political crises of the regions where they come from and the responsibility of European countries,” says French anthropologist Michel Agier. “But no one is listening.”

Someone torched a couple of shelters and the Jungle caught fire on the night of Oct 25. Police prevented all attempts to douse the flames. No one knew if it was vandalism or an act of defiance. Fabienne Buccio, the Prefect of the city of Calais claimed, “It’s an Afghan tradition to burn your home when you abandon it.”

The Calais apocalypse was a god sent photo-op for newsrooms. The whole world watched the Jungle burn.

For two more days, the refugees formed separate lines for men, women and children. Each of them was brought face to face with a map of France and told to choose two regions, one of which would be their destination while waiting for asylum or deportation. Registered and tagged with coded bracelets, they were loaded on to buses and driven away to one of 450 temporary asylum centers around the country.

What happened next is hard to comprehend. About 1500 refugee minors were housed temporarily in converted shipping containers. There was not enough room for all them. As a result, many of the youngest refugees were left to wander through the smoking ruins of the Jungle, alone, at night.

A few hundred Calais refugee children have been sent to England in a hand-off criticized as “shambolic.” The rest are in limbo. As they were finally evacuated to temporary shelters on November 2, the UK and France continued to bicker about their fate.

France, in stark contrast to Germany, has a conflicted relationship with NGOs caring for migrants. The Jungle was run like a real African refugee camp with charities and volunteers struggling to meet the most basic needs  – except with no UN to help. Doctors of the World and Catholic Relief Services sued the French government for violating migrants’ rights.

These organizations say the policy of destroying existing camps and preventing the construction or expansion of new ones will not work. Camps like the Jungle have existed in the Calais region in one form or another since 2002. They have been demolished before in 2009 and earlier this year and later rebuilt. The Calais refugees that were relocated to Paris quickly set up another “Jungle”, this time by the Stalingrad Métro stop. On Friday, November 4th, the camp of approximately 3,000 people was razed by 600 police and a few bulldozers.

Just 20 miles from the ruins of the Calais Jungle, in Dunkirk, the prefect’s office will no longer allow anyone to move into the Grande-Synthe refugee camp, also slated for demolition. There are no exceptions for “minors, families, pregnant women, the elderly and people in situations of difficulty.”

Where will they go?

“Without alternative plans,” says Franck Esnee, head of mission in France for Doctors without Borders, “they will be condemned to survive the winter as vagrants, destitute and vulnerable to violence.”