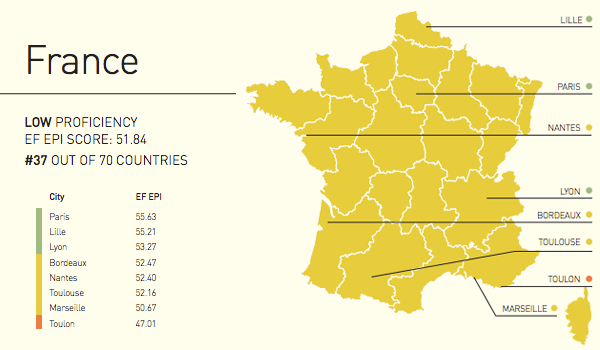 Education First, a language education organization, released rankings for the non-native English-speaking world’s competence in, well, speaking English. The French scored the lowest of every European nation except Russian, Turkey, and Azerbaijan.

Italy fared slightly better in the study than France (the two countries sandwich Ukraine), and Spain outdid Italy by a margin of Lithuania and Slovakia. France came in 37th out of 70 nations surveyed.

This shouldn’t be altogether surprising to anyone familiar with the French—particularly their penchant for dubbing films, something that Americans take pride in not doing to their foreign films except for comedic effect. The top five countries in English proficiency—Sweden, Netherlands, Denmark, Norway, and Finland—share a geographic commonality, but they are also fastidious subtitlers of foreign films. As a result, Americans are often hard-pressed to detect any accent in Scandinavians who speak English.

The idea, perhaps, that a Teutonic influence on Scandinavian countries, as well as Denmark and the Netherlands, is easy to surmise. Even Luxembourg and Belgium rank in the top ten and twenty, and both countries count German among their native languages. So: how do Alsatians fare? Lorainners? Do the Free Countians (not making that demonym up) speak better English than folks from the Midi-Pyrénées?

Much like their birthrates, the French seem to enjoy keeping things on an even keel: scores from the various régions don’t vary much. Paris lands squarely in the green zone with a score of 55.63, putting it three positions ahead of France’s 51.84, just between Slovakia and Lithuania. Lille, in the Nord département (France’s most populous), scored just below Paris with 55.21; after Paris, Nord-Pas de Calais was the top guess for English proficiency because of its proximity to Belgium and its transit relationship with the language’s mother country, but the rest of our guesses didn’t bear out. The differences across France appear to trend mildly downward as you get further from Germanic strongholds, but not by much. Kate Bell, one of the study’s co-authors, said across the roughly 50,000 French people involved in the study over the sample year, there was “a very steady trend of low scores.”

Much has already been made about the prevalence of dubbing in French culture, but outside of the Scandinavian linguistic juggernaut, other proficient European countries put a more official importance on learning English, making it, in some cases, a requirement outside of what could be considered equally “foreign” languages. Bell said that “Making English a required subject for every student implies a certain cultural orientation that I think is lacking in France at the moment.” These countries view learning English as a practical exercise rather than competitive linguistics; the sense being that English has a utility of its own, like knowing C++ or Java. But the urge to resist a global language is understandable—many Americans would bristle at the thought of having to learn Chinese as a lingua franca despite having the privilege of speaking perhaps the most common lingua franca of them all.

Bell also added, anecdotally, that in professional and academic contexts, the French tend to overestimate their English proficiency, whether it’s on résumés or in testing. The Swedish, by contrast, underestimate their proficiency, which is almost to be expected: they have far more room in the rankings to fall than to rise.