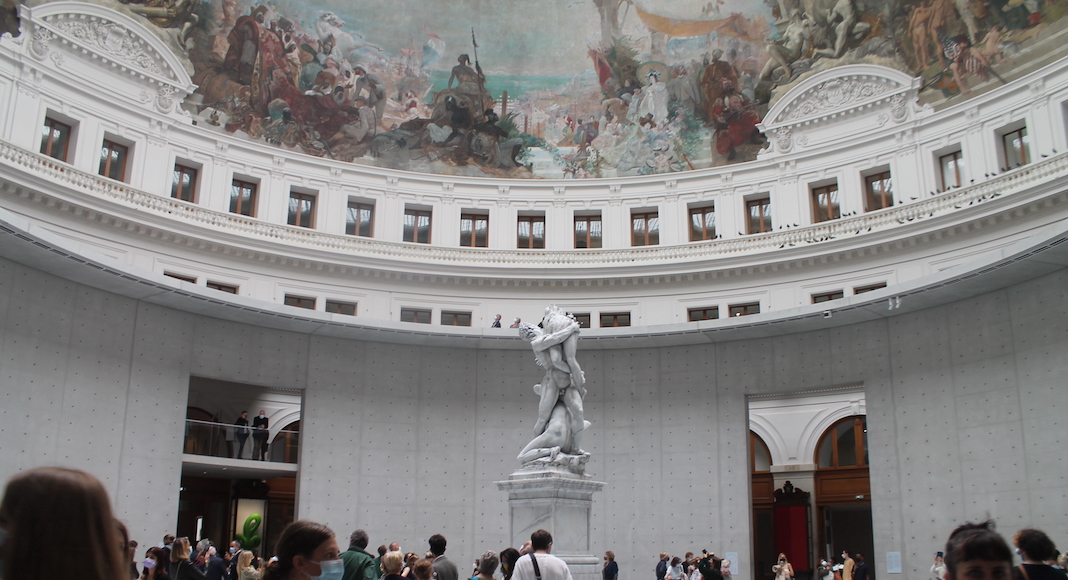 The structure with its imposing  domed rotunda (fashioned after the Pantheon of Rome) at its center  is the first thing that strikes one upon exiting the Chatelet Metro station less than a block away.  The Bourse de Commerce (Stock Exchange) was originally built as a grain depot, then used as the grain exchange before becoming, by the mid-18th century, the center of commerce.  Commerce, value, colonialism and their role in history are themes that inform the remarkable way in which the Bourse de Commerce has been renovated and reinvented to serve its Twenty First Century purpose.

Circling just below the glass dome (which offers natural lighting with a sundial effect as the day progresses) is the original stock exchange panorama with its stereotyped period representations of commerce and trade from around the world, with the indigenous peoples from these “exotic” places depicted through the cultural lens of the time. This tableau serves as a spring-board for much of the narrative to follow.

The exhibition is entitled, “Ouverture,” and brings together 380 works (one tenth of the French Billionaire François Pinault’s collection) by around thirty artists, with a focus on “previously unseen artworks…above all,” according to the exhibit’s brochure.  The collection makes clear its goal to offer access to modern art to the general public while giving relatively little-known artists a major platform.

In the organizers’ own words this is, “a manifesto on the multiplicity of practices-including painting, sculpture, video, installation, photography, sound works, light works, and performance-of a balance struck between the generations, cultures, origins, and genders of the artists present within the collection.”  One can certainly experience modern art in a number of magnificent Paris museums such as The Pompidou Center, Le Palais de Tokyo, and the Louis Vuitton Foundation.  But one would be hard-pressed to find a venue with a private collection that introduces as many new voices to the world stage, and in such a personal context, feeling more like being shown around a friend’s new home than visiting a gallery.

Whether the collection is to one’s liking or not, it is inarguably one of the most strikingly eclectic, thoughtfully organized, and effectively laid out. Floors serve to separate each artistic medium, with the basement housing audio installations, the ground floor sculpture, second floor photography, and the third floor painting.

Before you enter the main rotunda, an important work has been stuck between the (serious airport level) security machines and the carefully laid-out collection: Martial Raysse’s Ici Plage, comme ici bas (2012). “[A] large panel painted in the manner of a historical painting but in acidic, almost electric sienna hues that reinvent the frieze compositions of the primitive masters.”

Japanese architect Tadao Ando’s concrete wall forms a ring around the interior of the central rotunda, separating the space into two galleries while offering striking counterpoint to the natural elements (and lighting) of the original structure.

The central artwork occupying the rotunda gallery is Swiss artist Urs Fischer’s faux marble reproduction of  Giambologna’s “Rape of the Sabine Women” rendered in wax.  Surrounding it, the floor of the rotunda is sparsely decorated with wax versions of ordinary home and office furniture, with an occasional piece of African tribal furniture (surely a nod to the colonial themes in the panorama overhead).  There is also a life-sized figure of the artist’s friend, Rudolf Stingal.  What every piece on the floor has in common, is that each is made of wax, with multiple wicks that are lit every morning.  We are witness to the disappearance of the works which are, like all things (including seemingly timeless art) ephemeral.

On the other side of the concrete wall are twenty-eight wood and glass vitrines that were originally used to display the “latest” innovations in industry, technology and commerce at the stock exchange.  They now house artist Bertrand Lavier’s found and worked pieces, many familiar icons of the consumerism of our daily lives. A whimsical homage to the “innovations” that we take for granted – the “latest” upright vacuum cleaner, a stoner’s skateboard, an electric bike, and a detail from a Disney cartoon.

Off of the rotunda is a maze-like ground-floor gallery dedicated to Harlem artist David Hammons’ remnants of discarded materials which are suspended, assembled or otherwise worked into powerful works “evoking collective cultural memory: cultural blending and colonialism, glitz and its excess.” 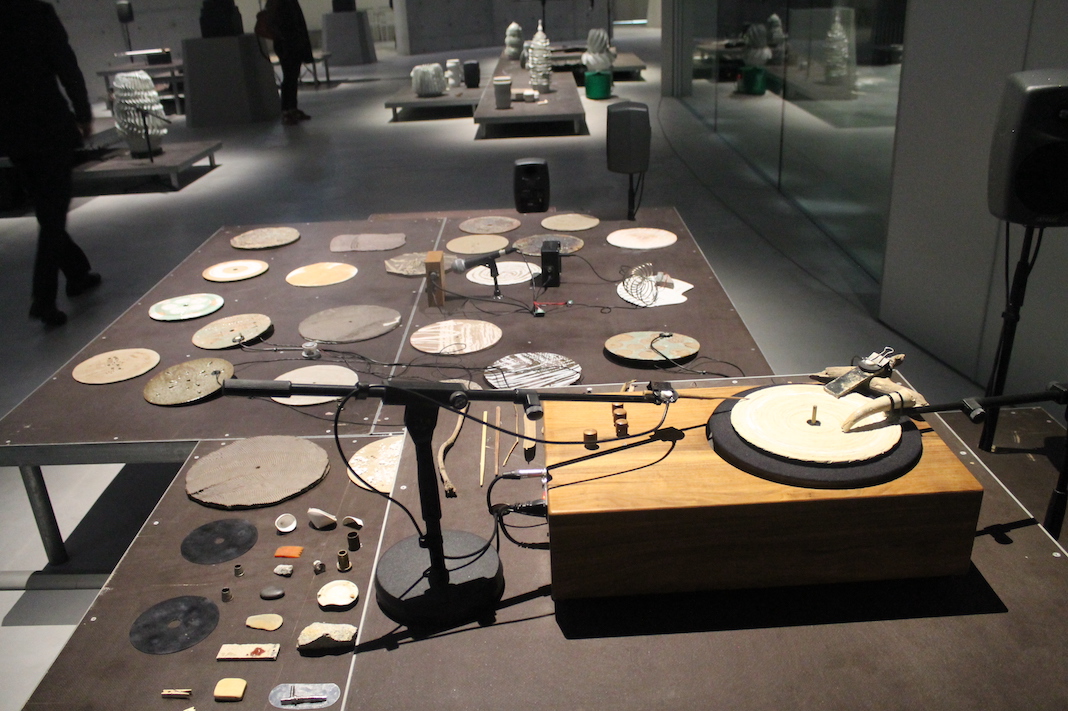 A series of tables house what look like oversized deconstructed music boxes, each a moving sculpture that drives a contraption, whose gears in turn plays an instrument (bringing to mind an early 1900s wax phonograph cone). Together, they create artist Tarek Atouri’s always changing sound installation, The Ground, 2019. Composition for 12 instruments. 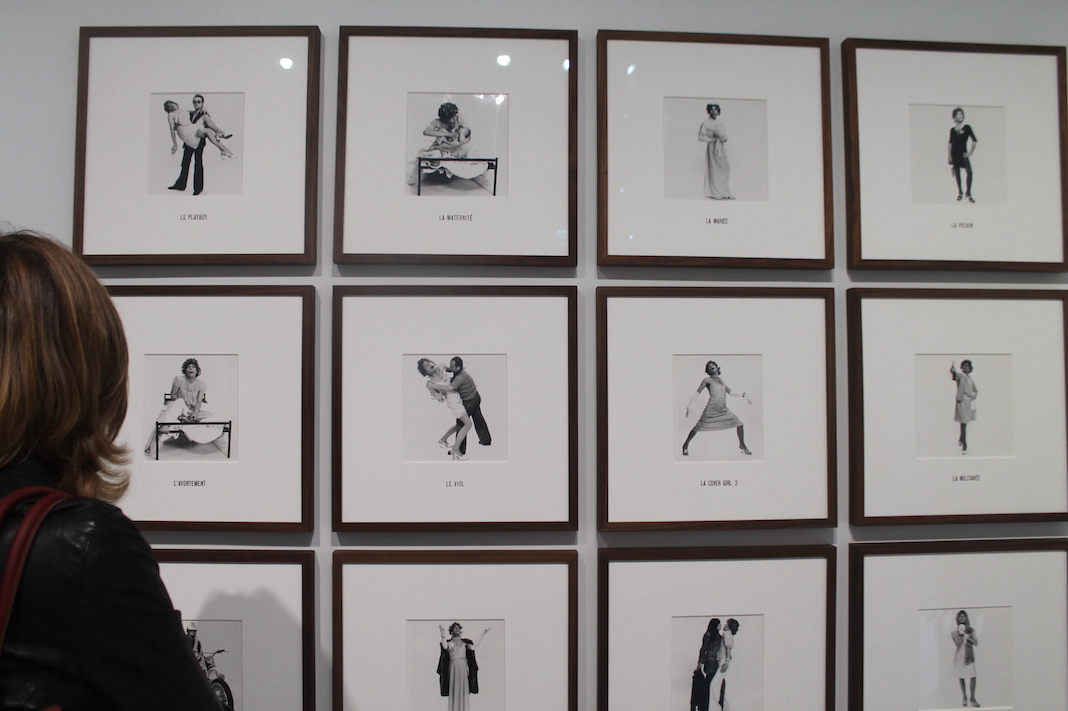 The second floor is dedicated to the photography of five seminal modern photographer-artists (one French, five American) who “disturbed the limits set by gender, age and social role through dressing up, gender disguise and putting themselves in theater-and-movie like settings.”  With the exception of a few oversized images that occupy a third of an exhibition wall each, most are presented in Instagram-like walls of images, mood-boards of sorts that force the viewer to approach and take in individual photographs. 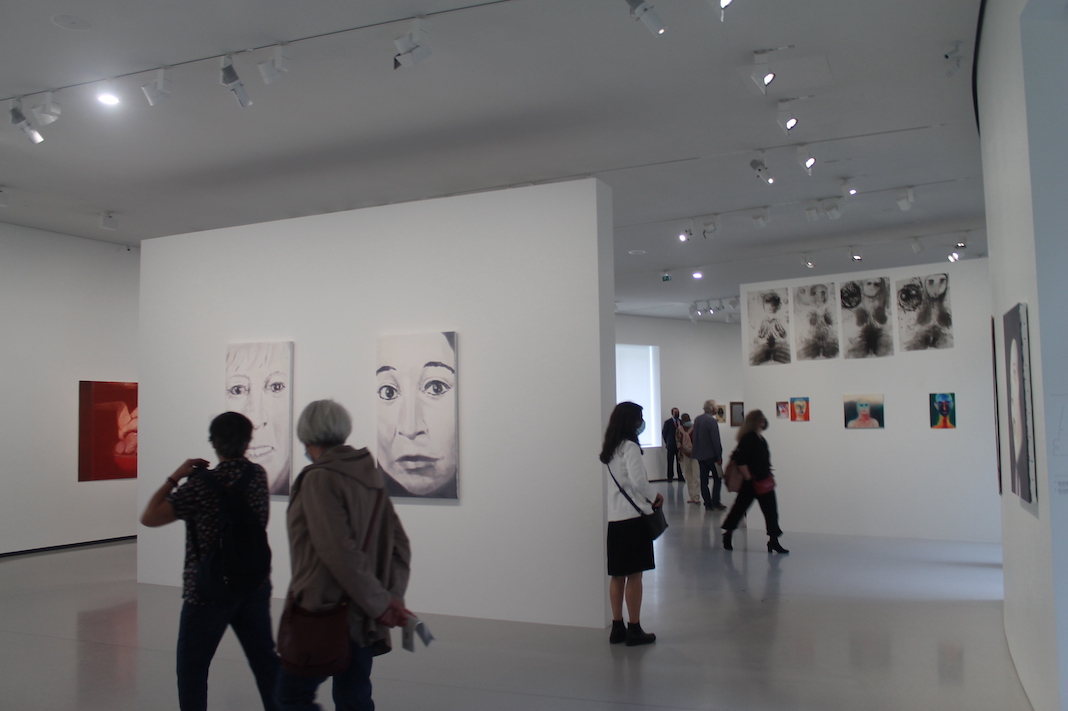 The third floor houses a rather intense collection of thirteen international modern painters. Among them, Miriam Cahn is the Swiss Jewish daughter of survivors of the Holocaust, after which some said that the human body could never again be represented descriptively.  This is clearly reflected in her work on display, which is both striking and often perturbing. Cahn was at the forefront of the movement against the outmoded notion of having to represent women only as soft, feminine and young.  Cahn has claimed that she doesn’t imbue her work with any particular significance; that is the viewer’s job.

By contrast, there is Afro-Brazilian artist, Antonio Oba, whose arresting and politically charged work carefully mixes Christian and African iconography in his intricately detailed works. Sesta 2019, which depicts a young black boy awakened from a nap in a field of wheat wielding a pair of scissors, and the disturbing Cannibal, a frightening portrait that is supposedly of Ota Benga.  (Another tip-of-the-hat to the theme of colonialism established in the rotunda.)  South African artist (currently based in the Netherlands), Marlene Dumas’ spectral and engaging work includes Mama Roma and Destino 2012, which draw on cinematic themes.

One needs to pause and reflect after such a whirl-wind exhibition.  The restaurant on the third floor offers just that.  Le Halle Aux Grains, an independently owned and operated restaurant and Tea Salon that offers an ideal spot to enjoy a panoramic view over delicious dishes, pastries or drinks while discussing the collection.