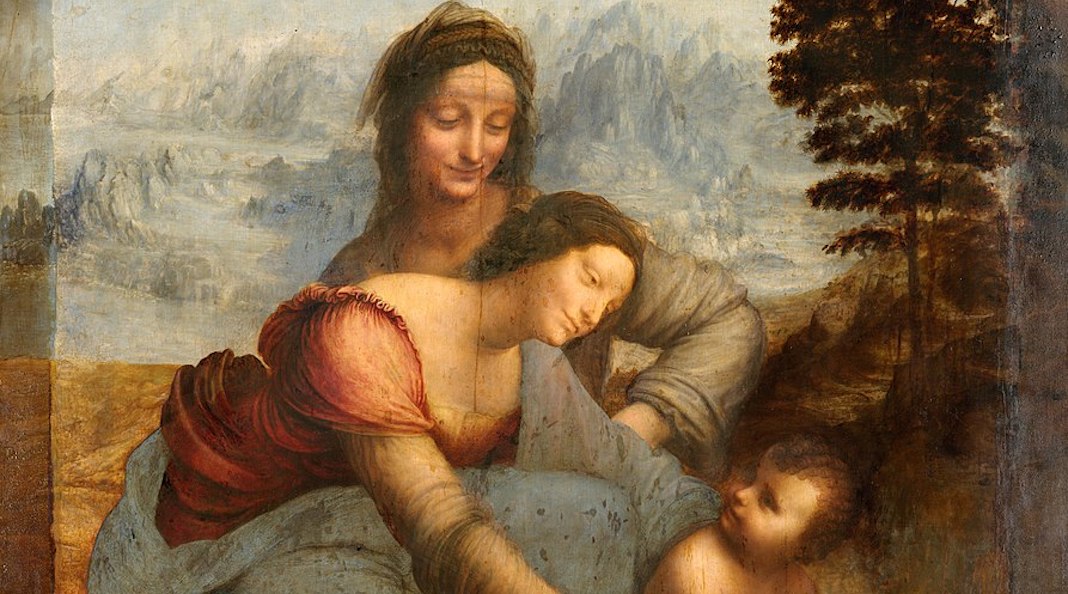 The Fight to Get Leonardo da Vinci to the Louvre

On February 9, 1498, at a fancy dinner in Milan at the Sforzas’ house, Leonardo da Vinci impressed the crowd with a speech that presented painting as the most complete expression of liberal arts, transcending poetry, music and sculpture. Why? Because it combines precise observation and imagination, reality and fantasy, which cannot be conceived without the study of optics, mathematics and natural sciences.

It is this definition of painting that da Vinci tries to apply, from his very first steps as an apprentice in the studio of the great Florentine artist Andrea Verrochio. He will not only draw a flower or a beautiful body, but he will always look further to understand the organization of muscles, the secrets of the balance of forces, the movements of water or air. It is this quest that the Louvre wants to highlight during the retrospective organized for the 500th anniversary of the artist’s death in Amboise, on May 2, 1519. The exhibit, open October 24, 2019 to February 24, 2020 (get tickets here), aims to show how in all of his work, da Vinci attempted to produce the most beautiful, the most perfect painting.

A challenge. For Vincent Delieuvin and Louis Frank, the two curators of the exhibition “Leonardo da Vinci,” the task might seem simple. Consider the aspect of getting the loans of works not belonging to the Louvre, which already owns many of them, including “The Mona Lisa,” the most famous painting in the world. How can you refuse to participate in such an event, and with such a museum? Owners, private or institutional, could consider this loan an honor.

But it wasn’t that simple. Firstly, the quality of the works proved problematic. A researcher at heart, the artist left behind paintings that are often sublime, but which have not stood the test of time, hence the reluctance of museum managers to make them travel. The Louvre is the first to be affected by this problem: of the five paintings signed by da Vinci in its possession, only “La belle ferronnière” and “Saint Jean-Baptiste” can still leave the walls, the others are under house arrest, starting with “The Mona Lisa,” whose wood is cracked. It’s for these reasons that the Florence offices have kept “The Annunciation” from the exhibition.

But the painter posed another problem, more unexpected: his too great notoriety. “The Mona Lisa” was immediately excluded from the exhibition and remains in its usual place, in the newly renovated State Hall (just go up the nearby stairs to admire it). Many of the museum’s 30,000 daily visitors only come to snap a selfie in front of the famous portrait, to have included it would have killed the project.

After this decision, the most difficult thing was to convince owners to lend the works. However, a painting by Leonardo does not lend as easily as a Botticelli or Rembrandt, even though those as well are rather highly valuable. The rarity of his paintings — specialists have attributed less than 20 to him — as well as the almost mythical status he has acquired over the past century have raised his value to a stratospheric level. In 2017, the painting “Salvador mundi,” although very damaged and whose attribution to da Vinci was contested, reached 383 million euros at auction, making it the most expensive painting in the world, and further increased his status as a painter.

Tribulations. As private insurers asked lenders to estimate the value of the works themselves, some institutions didn’t hesitate to value a drawing by da Vinci at 450 million euros. A theoretical, mathematical exercise, certainly, but one that is very expensive in the event of an accident. So, even if the French government is its own insurer, the risk is enormous. Above all, there is a growing tendency for countrys to stick the label “national treasure” on the master’s works. Such is the case with the “Dame à l’hermine,” which was owned by the Czartoryski family and kept by the post-World War II communist regime in a small museum in Krakow, until its status was changed in 2016 when it was acquired by the Polish state. When asked if he was ready to send this painting to the Louvre, the Polish Minister of Culture replied: “I will lend it if the Louvre will lend us ‘The Mona Lisa’” … Deadlock.

The tribulations of “The Man of Vitruvius,” who is to drawing what “The Mona Lisa” is to painting, testify to the political value of da Vinci’s works. While it was included in the agreement made in 2017 between the French and Italian Ministries of Culture that organized the loans for the Louvre exhibition, the drawing’s departure has been questionable several times, first because the management of the Accademia Gallery in Venice, where it is preserved, was concerned about its fragility, and then because of the populists in power in Italy, who want the great works to remain in their original museum. Finally, its departure was challenged by an association’s appeal to the Veneto Administrative Court, which accepted the appeal on October 8 before dismissing the complainant on 16 October. On October 20, however, “The Man of Vitruvius” was finally enthroned in the great room where da Vinci’s scientific drawings are exhibited, under the gaze of the apostles in a copy of Milan’s “The Last Supper,” the most accurate, made by a da Vinci disciple.

So, is it impossible to mount a da Vinci retrospective? No, of course not. And the treasures belonging to the Louvre, from the “Vierge aux rochers” to Isabelle d’Este’s sublime silverpoint portrait and the drawings of the Institut de France (including the famous helicopter tank), are enough to inspire enthusiasm. In addition, the Commissioners were ultimately able to obtain many loans. Brexit or not, the Queen of England, who has some of Leonardo’s most beautiful drawings (the magnificent “Déluge”) and most interesting writings, has been very generous. Similarly, from Budapest to New York, Rotterdam and, of course, Parma, Naples, Florence and Venice, the works, all exceptional, came in large numbers.

The two curators have therefore achieved a feat, and this retrospective, in all its elegance, is a real success. Welcomed by a huge statue of Verrochio, in a room featuring sublime drawings of drapes, visitors can discover extraordinary drawings, from preliminary studies for paintings to scientific illustrations, an aspect of Vinci’s work that is too often unknown to the general public. On the walls, too, surprising infrared reflectography, radiographs of the works that explain the painter’s method from the inside and sometimes replace the paintings themselves. Thus, it is not “Ginevra Benci” that we see, but its black and white analysis. Seeing the painter’s work in the process of being created is obviously exciting, though sometimes frustrating. It would have been difficult to do the exhibition any better than it is, especially since this retrospective has a good chance of being the last one.