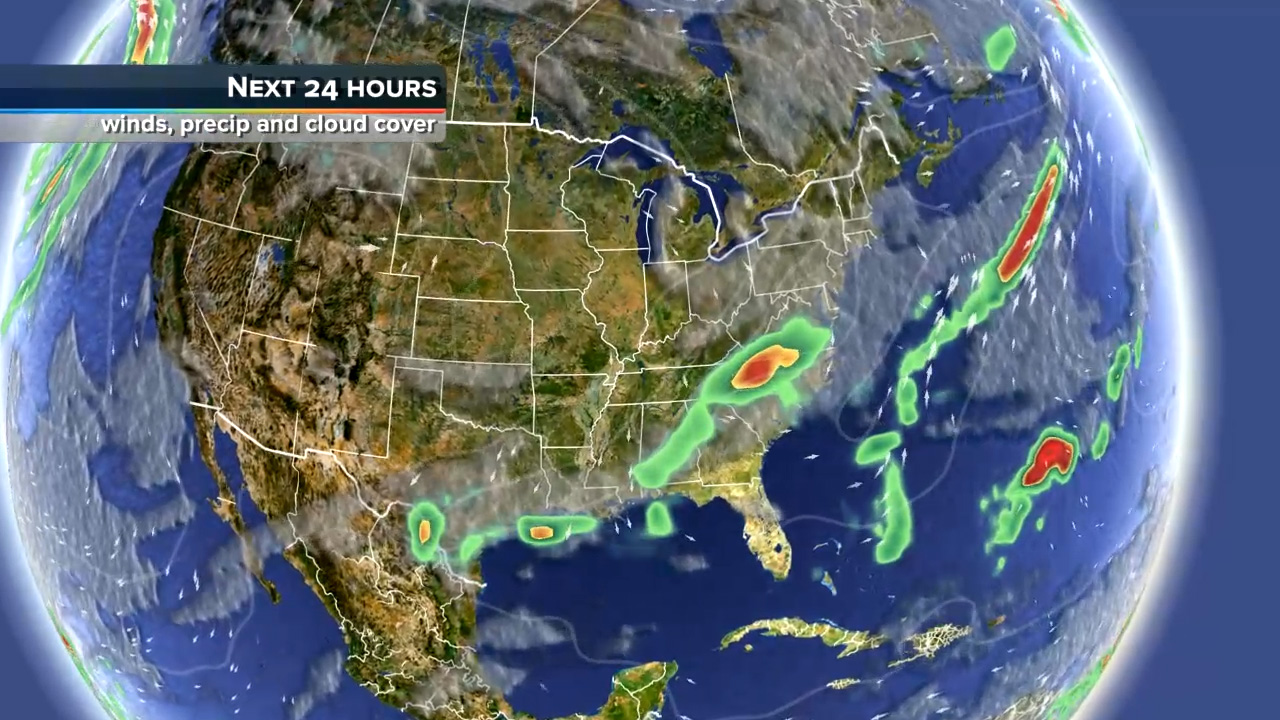 Météo-France produces content for the large national media, TV, radio and newspapers. Around six years ago, media outlets started to request Météo-France to give them a way to produce the weather forecast video with the presenter in the foreground. So far producers were limited to voice over off-camera. Météo-France evolved and learned, and developed blue or green-screen video tools where the forecaster could work independently and operate the equipment alone to produce the video of himself with the weather graphics in the background. For that the forecaster had to prepare the weather charts, tape himself in front of a blue screen or green screen, and then re-insert the images at the appropriate spots.

“As media evolved, the real limitation was the lack of special effects,” explains Emmanuel Bocrie, director of the media unit for Météo-France, “we needed a flexible tool that would allow us to overlay certain animation and visualizations beyond existing satellite or radar images.”

In other words, they needed to be able to overlay a projected trajectory of a weatherfront, for example, or an animation showing a temperature change. Being a state-owned company meant that any disbursement of funds must be duly justified and go through the proper administrative channels, so Méteo-France started to research what software was available in the market and in 2015 launched a tender for interested providers to submit a bid.

The constraints of the tender was that Météo-France wanted a product that they could use fully and autonomously, and wouldn’t have to call the provider to make any small adjustment or customization. The tool should be user-friendly, because these would be different forecasters operating it, who are not necessarily broadcast specialists. Two companies made the final shortlist: a German provider, and American bidder ChyronHego. The others were either too expensive or had not provided a correct and complete proposal. The winning product Metacast was provided by ChyronHego’s French reseller, Magic Hour.

About the win, Karl Eggestad, Metacast sales director at ChyronHego said that being chosen by a highly regarded institution like Météo-France was “an important recognition of Metacast’s technology and the competence of the team”.

So … what gave ChyronHego the edge?

“We could tell that ChyronHego was more sensitive to our needs and responsive to our requests,” said Bocrie, “instead of immediately saying ‘yes, no problem’, they would say, ‘that’s a bit different, let us find out’ and then would come back with an answer. We felt that they were not just selling us a tool for the sake of the deal, but were truly committed to responding to our needs. There were two features that Metacast did not include at the time, related to the visualization of lightning and some very particular textures, and they said ‘we don’t have it right now, but we can develop it for you’, and they did, and are delivering them in the updated version of the tool this week.”

To overcome the language barrier, Bocrie explains that Météo-France’s staff communicated in English, particularly on technical aspects, and a Metacast specialist was available on hand who could switch into French if needed. There was such a good attitude on both sides that the communication was very fluid.

In the context of the implementation of the Metacast production tool Météo-France’s graphic specialists underwent a 15-day training so they will in turn train the forecasters to use it. The first operational production will air on August 28, although Metacast is already being configured for use on small productions and during the UEFA Euro 2016 soccer tournament being held in France this summer.

What are the takeaways for other potential American businesses planning to do business in France?

Emmanuel Bocrie encourages American companies to bid in France and not be intimidated by language or culture barriers. He advises businesses to:

About ChyronHego:
Based in Melville, N.Y, ChyronHego is a provider of global broadcast graphics creation, playout, and real-time data visualization with a wide range of products and services for live television, news, and sports production. More information at www.chyronhego.com

About Météo-France:
Météo-France, the French national meteorological institute ensures safety, in meteorological terms, for people and property in France and French territories, while also providing general weather forecasts to the public and private sectors in France and abroad. For its media clients, Météo-France offers a full range of services from raw data feeds, still imagery, and movie clips, to entire presented broadcasts produced in the Météo- France broadcast studio in Paris. More information at www.meteofrance.com