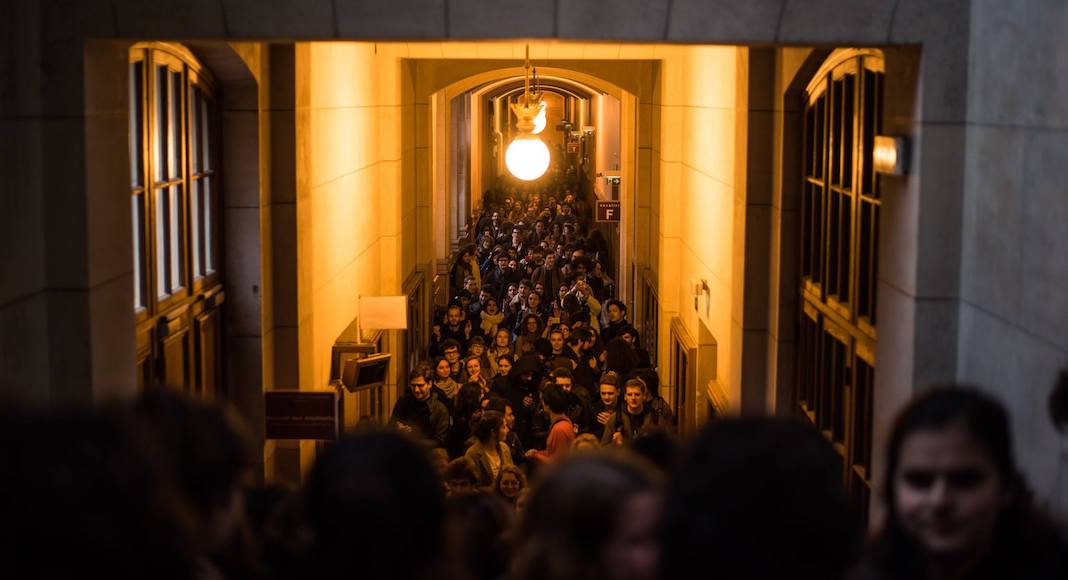 Students Occupy the Sorbonne as Protests Sweep through France’s Universities

On Thursday, April 12, approximately 300 students occupied the Sorbonne in the Latin Quarter in Paris. A general meeting of university students protesting the new reforms had been planned, but once 300 students entered the building, some 20 police officers closed the doors, blocking the rest from entering. Signs reading “we’ll be back” and “The Sorbonne supports ZAD” (Zone to Defend) hung from second floor windows. Two hundred more students who came to attend the general meeting stood outside the locked doors, chanting “Open the Sorbonne!” A student with a megaphone called from a Sorbonne window that they won’t end the blockade until students are allowed in the building for the meeting: “If it takes a week, it’ll take a week.” Late Thursday night, the university’s chancellor ordered the police to evacuate the students. “The evacuation which involved 191 people happened calmly and without any incident,” a statement from Paris police said. The university will remain closed Friday and Saturday.

This is not the first day student protests have taken place at the Sorbonne. Several of the Paris university’s campuses were closed on Tuesday: Saint-Charles, Pierre-Mendès-France (Tolbiac), and Clignancourt, all from Paris I. Paris III’s Censier and Paris VIII’s Saint-Denis were closed Tuesday and Wednesday.

The cause of the chaos are education reforms. On the campaign trail, then-candidate Emmanuel Macron pledged to reform the centuries-old system of admittance into a French university. Now, acting on that pledge as president, Macron passed two key education reforms that have resulted in sit-ins, protests, and blockades from angry university students all across France.

In Montpellier, a sit-in was violently broken up by men wearing black carrying balaclavas. One hundred students staging a sit-in at Strasbourg University were evicted by the police. In Nanterre, some 30 individuals protesting in a university building were forcibly removed, injuring one and arresting seven. At the Sorbonne’s Tobliac campus, which was barricaded for three weeks, five Molotov cocktails were found on. Exams at Montpellier’s Paul Valéry campus were interrupted when the computer server suffered an attack by the protestors.

According to government spokesman Benjamin Giveaux, Macron denounces these “violent mobilizations” that are “far from the subjects related to higher education and reform.”

The government’s desire to upheave the system stems primarily from university drop-out rates. Less than half of first-year students move on to the second year, either because they dropped out, failed, or restarted to change degrees. In 2017, only 27% of students obtained their bachelor’s (license) in the expected three years, another 12% in four years. 33% drop out after the first year, 13% after the second. In total, 61% of students who matriculate will never get a degree. That’s worse than the United States’ rate, whose university system is referred to as a “dropout factory.”

Annliese Nef, a spokeswoman for the National Union of Higher Education (SNESUP) and a historian at the Sorbonne, attributes the high dropout rate to the inflexibility of the system. At French university, if your degree is in literature, which you decide before matriculating, all your classes are about literature. “You can’t know what you want to do at such a young age,” Nef says. “It’s better to have a right to choose English for a semester and find your way [academically], than [be forced to] choose one thing and then drop out.”

Rather than reforming the universities, Macron is reforming how students get to university. Under the current system, high school students pass a rigorous set of 10 exams called the Baccalaureat (or le bac), first instituted in 1808. With a passing grade, students can attend any of France’s public universities, with practically guaranteed admission to their local university. After high school seniors choose which public universities they like and the degree they’d pursue at each, the government then assigns them a university to attend.

One of Macron’s reforms targets le bac. Starting in 2021, the bac’s three broad subject areas (literature, science, and economic and social studies) will be eliminated. The number of exams will be halved to five, plus an oral exam. Two of those exams will be on specific disciplines that students chose and began studying as juniors. The idea is that students will be better prepared to study those disciplines in their university classes and therefore less likely to drop out or fail. Additionally, the final bac score will be a composite score of the bac exams and grades obtained in the last two years of high school.

The other reform is arguably what has caused university students to hold sit-ins, protests, and blockades. With so many students passing the bac (about 89%), the flood of students entering university annually has resulted in overcrowded classrooms and the implementation of an unpopular lottery system to get into the most crowded degree tracks like law and psychology. Currently, universities fight overcrowding with survival-of-the-fittest: difficult exams. The first-year final exam for law and medical students has an initial failure rate of 90%. The reforms will cut the lottery system, and allow universities to admit students based on merit.

Students claim the reforms threaten access to education, which is considered a pillar of France’s society. Higher Education Minister Frederique Vidal has promised that weaker students will be offered catch-up classes to meet new minimum course requirements, though professors are skeptical there will be funding for this.

“The situation before was problematic but the new rules will not help, they will worsen inequality, and universities remain underfunded,” said a student at the Clignancourt sit-in in Paris.

Not all students are interested in shutting down their schools. Students at two Lorraine universities, Nancy and Metz, which were barricaded on April 10, voted electronically to reopen the schools, with 70.5% of students in favor. To avoid resorting to force, the university president will be negotiating with the protestors. Students at Strasbourg’s Esplanade also voted “by a narrow majority” to end a blockade.

In many universities, exams are scheduled to take place now, or very shortly, increasing tensions. At Lille, students taking finals have been allowed to enter the blockaded university. “I’m sick of it, all we want to do is take our exams in peace,” says one student. The university president denied requests to cancel exams.

The movement isn’t unified, and likely will be seen as a group of rogues so long as some students are protesting and others are protesting the protests. “It’s called selection by failure,” said Caroline Kahn, a doctoral student in Paris who attended first-year lectures packed with 1,000 students. “We are the only country in Europe where universities are not a place of excellence. It’s frustrating.” She adds, “To those who fear selection I’m tempted to say: Work harder!”