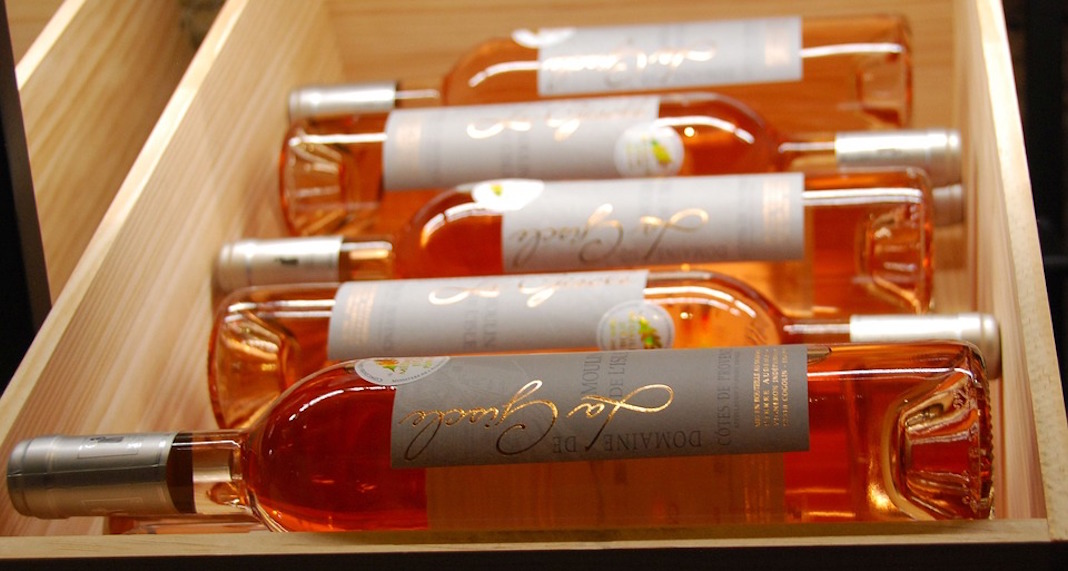 In New York, there’s currently a “rosé mansion” installed on 5th Avenue. The pink drink is sold in cans and at drive-throughs. It’s inspired many a fusion drink creation, frozé and rose cider among them. But when something becomes popular, its market inevitably becomes flooded with poor imitators at every price point. With the rosé mania at an all time high, can we ask the question, are we hitting a peak in quality? Is this the beginning of the end of the rosé trend in the United States? Nothing can be popular forever.

One thing is certain: rosé mania reached a new milestone in 2018. It’s the year that singer Jon Bon Jovi and Bachelor star Lauren Bushnell added their names to the long list of stars who launched their own brand of rosé, joining the ranks of, among others, John Legend, Drew Barrymore, and Brangelina. French vineyards have seized on the moment as well. Georges Duboeuf, Beaujolais’ international exporter, has announced the marketing of a Beaujolais Nouveau rosé.

New products have been created: have you tried frozé, rosé-sangria, rosé cider, or a rosé cocktail? “It’s madness,” says Pierrick Bouquet, who capitalized on the rosé trend in the United States by founding several events related to the pink wine, such as Pinknic and the Nuit de Rosé. “The sales figures in volume and value showed that the business was there. The market adapted.”

“Rosé sales increased by 50% last year. They’re exploding everywhere in the USA, especially in coastal cities,” notes Bob Gaudreau, CEO of Provence Rosé Group, a rosé importer and distributor in the United States. The reason for success? “It is a supple wine, ideal as an aperitif or in the evening, it goes everywhere… it’s the new champagne.”

This popularity is not seen so positively by all wine experts. Patrick Comiskey, a food critic for the Los Angeles Times, wrote in April about the “tsunami of pink mediocrity” that has flooded the American market with the increasing demand. “Demand is such that practically every winery in California is obliged to make one, whether or not they have the grapes, the proper site or the aptitude,” he critiques. “Does this matter? Not at all. Nobody cares what it tastes like. People just want something cold and pretty and Instagrammable in their glass.

In Bon Appétit, a sommelier went further. Victoria James describes in a long text published in August a “pay to play” system, where rosé companies pay sommeliers or offer them incentives in the form of “dinners, tickets to sporting events, free products,” to put their wine on the menu. This has led to “a proliferation of crappy rosé,” she writes.”When I see big-brand pink swill on otherwise nice restaurant menus, I get furious. You might know which brands I am talking about, the ones that sponsor huge parties in the Hamptons. They masquerade as luxury goods, with fun bottle shapes and cutesy names, but are simply bulk wines” made from “rotten or low-quality grapes, underripe fruit, or red wine by-products.”

Bouquet doesn’t disagree. “Rosé production in the United States has nothing to do with France, where it is forbidden to mix a white and a red grape variety to make rosé. There are no restrictions here. That doesn’t mean rosé is bad, it’s just easier to produce,” he explains. “Some producers will make something rotten to take advantage of the craze, but it’ll work because they do the right marketing.”

While many rosés are now made to be bubbly, some producers like Sacha Lichine, who runs Château d’Esclans, a domaine near Fréjus in the Var, still resist. “It’s an idea often offered to me, but I’ve always refused because I don’t want to venture into a territory that isn’t mine,” says the 58-year-old winemaker who produces the best-selling rosé in the United States as well as the world’s most expensive cuvée, worth close to a hundred dollars a bottle.

However, this purist does not view the new variations of rosé, like frosé or the rosé in a can, with criticism. “It allows for the introduction of rosé in a fun way, which can be a good thing,” he says. “Then, it’s up to us to educate their palate by making them taste our wines which, by comparison, will make them aware of the quality of the product they really have in their glass. They’ll learn that rosé can also be un grand cru,” a designation which refers to a French winemaker renowned for producing top-tier wine.

“The more people who want to make rosé, the more it pushes professionals to work on quality to distinguish themselves from the rest,” adds Gaudreau of Provence Rosé group. “The rosé craze … will participate in consumer education: they’ll learn to tell the difference between a French and American rosé”.