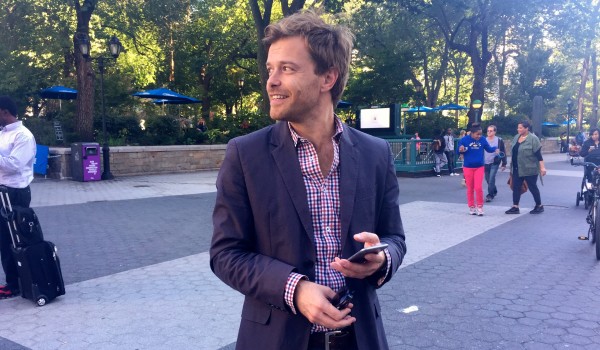 It’s another beautiful day in Union Square: the birds are tweeting, the sun is out, and a man in his underwear holding two rubber chickens is singing at the top of his lungs.

In an instant, his video becomes part of a feed of clips that have been automatically tagged and organized by location and time. “So there you have it! That’s what MyTape is for,” says Berger-Perrin of his app, which became available on the App Store just two months ago. No editing, no time limit, no hashtag needed, MyTape’s simplicity makes it a cinch to use if you’re more interested in sharing and viewing raw material than controlling the final product. It’s like Periscope without the live streaming aspect.

Its design is pretty and usage is intuitive. Just pressing the record button and then stopping it will automatically post your footage to MyTape’s feed and of course tag its time and location. Within the app you can also follow friends and watch their videos, and check videos that have been filmed in close proximity to wherever you are. You can always see where and when a video was shot and all videos are public.

Under the username Brattoune (“That’s my dj name,” he explains), Berger-Perrin has posted a tour of a friend’s house in Harlem, Yannick Noah seated at Red Rooster, a kitten, the Cloisters, and a party in Bushwick. “See, there, for example, I could show my friends what a night at the Brooklyn Mirage looks like.”

A couple driving through Hollywood, a skateboarding trick, a concert — if early posts on MyTape seem to mostly have the light/boastful feel of Instagram posts, the inspiration for the app comes from a much darker and more urgent place. After the massacre at French satirical weekly Charlie Hebdo, Berger-Perrin recalls searching YouTube for amateur footage surrounding the attack. “I realized that there was no place you could go to find location-tagged videos in real time. The goal of MyTape is to allow people to see what is happening right now in a given location.”

For the moment, MyTape has about 2,000 users, and with more social networks launching every week it’s hard to know whether or when it might achieve viral success. “A little like Twitter, which exploded when the airplane landed in the Hudson river, I’m waiting for an event that might push MyTape forward,” says the ambitious entrepreneur.

“My dream is to build a worldwide video archive. In ten years we could consult it with a question like ‘What was the weather was like on this day in 2016?’ and then watch a MyTape video taken on that day in that place,” muses Berger-Perrin. For that to happen, people everywhere need to download and start recording. “I totally believe in MyTape,” insists Berger-Perrin, while in his feed, the naked rubber chicken man sings on, forever illustrating a day in New York in 2015.