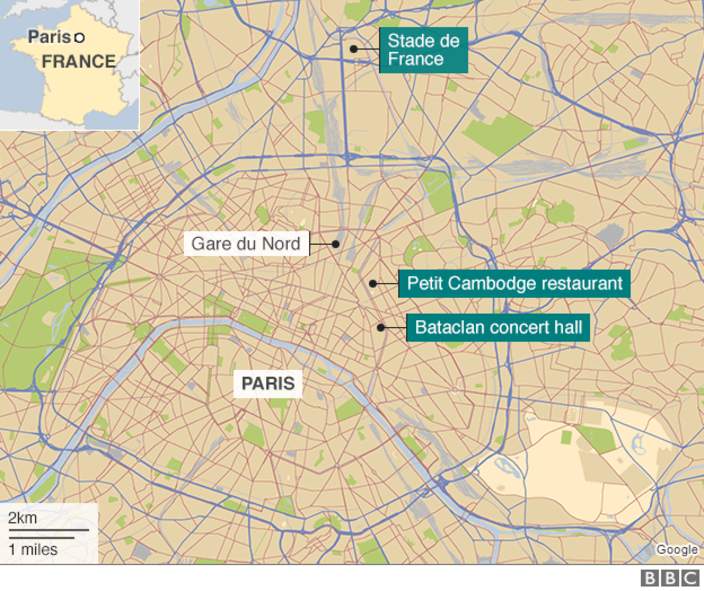 Several shootings have been reported in Paris this afternoon, with at least forty people confirmed dead by the police.

The BBC is reporting that a gunman opened fire in the 11th arrondissement at a restaurant called Petit Cambodge, with their reporter on-site has observed ten people laying in the streets. Police have sealed off the area, and the gunman is believed to have fled.

Liberation is reporting shootings in the area near Le Bataclan, and the Independent has what are now confirmed reports of a hostage situation at the arts center, with the BBC fielding claims that as many as a hundred hostages have been taken. At 6:27pm, the BBC reported five explosions were heard near Le Bataclan, and police are preparing.

Three explosions were heard at a bar near Stade de France, where President François Hollande was apparently watching a friendly game between France and Germany. Oliver Bierhoff, Germany’s team manager, told the Kolner Express earlier today that bomb threats had been made against the team’s lodgings at the Hotel Molitor. The AP has word from French officials characterizing the attacks as suicide bombing.

Details are limited, but it has been reported by the Independent that a gunman carrying an AK-47 was strafing the street in one of the incidents. It is currently unknown who perpetrated the attacks—which several agencies have deemed to be coordinated—no groups or individuals have claimed responsibility.

In a press conference at 5:48 EST, President Barack Obama offered any and all assistance that France required, calling them America’s “oldest ally” and Paris a symbol of the “timeless values of human progress.” Obama continued, saying that, “Those of us in the United States know what it’s like” and that “we’ve always been able to count on the French people to stand with us.”

President Hollande has declared a state of emergency across the country. BBC reporter Kim Ghattas tweeted that Hollande “seemed to have no doubts about who is behind the attacks” despite not having named names.

The BBC is offering live coverage of the events in progress. Parisians are offering shelter to anyone in need via the hashtag #PorteOuverte on Twitter.