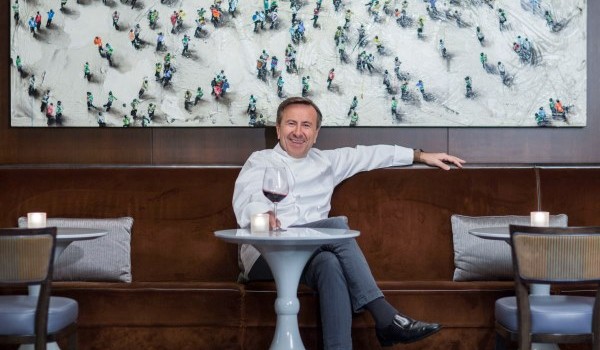 “It’s not my favorite part of the job, but it’s something I have to do.” Indeed, it’s the duty of celebrity chefs these days – once again, Daniel Boulud has embarked on a promotional book tour.  With visits scheduled to New York, Milwaukee, Los Angeles and San Francisco, he is going all out to promote his latest cookbook, Daniel: My French Cuisine.

This is his fifth book, to be exact, twenty years after the release of his first cookbook, Cooking with Daniel Boulud.  It has also been twenty years since the opening of the now legendary restaurant Daniel in Manhattan’s Upper East Side.  “It’s just a coincidence,” he points out. “The other cookbooks focused on more simple recipes for home cooking. This book doesn’t commemorate Daniel Boulud,  it’s a celebration of the restaurant Daniel,” he says.

The book boasts 400 pages co-written with journalist Sylvie Bigar (also a French Morning collaborator), and 125 bright, pristine photos by Thomas Schauer.  The master chef shares some of the iconic recipes that have delectably delighted his patrons over the last three years.  Randomly chosen recipes feature such favorites as: Porcelet aux Cinq Epices (Five-Spice Suckling Pig), Duo de Bœuf (Duo of Beef), Caille au Raisins (Quail and Grapes), Escalope Viennoise and Mille-feuille with Potatoes.  He also reveals dishes from his favorite regions in France, and those that he prepares for friends and family.  Prominently showcased are classic specialties from Lyon – the breeding ground for master chefs, and where Daniel Boulud made a name for himself.  Chicken with Tarragon Vinegar, his first dish as an apprentice chef at Lyon’s Nandron restaurant, is also beautifully featured.

In addition to the recipes that were awarded four stars by the New York Times – one of which he lost in July – and three stars by the Michelin Guide, the book presents the art of cookery, Boulud-style.  With an introduction written by his mentor Paul Bocuse, Boulud has written ten essays on wine, meat, bread and even truffles.  In the latter, in particular, he tells of how he once paid “the price for a small car,” ($12,000 – $14,000) just to get his hands on the precious mushroom.

For readers interested in what goes on behind the scenes at Daniel, the highlight of the book will surely be the witty essays contributed by American journalist Bill Buford, who Daniel Boulud invited into his kitchen.  The food critic, who, in amazement, assisted  in the preparation of a Coulibiac (a pastry shell filled with fish and vegetables) and a fabulous Tête de Veau en Tortue (Veal head prepared in a bouillon), writes about Daniel’s wrath with regard to a badly prepared pot-au-feu (beef stew). “Sorry, it’s shit no?” Daniel apologizes to his guest, who was a bit taken aback. “I haven’t become less demanding over time,” explains Boulud. “In the past I was just as demanding, but alone. Today, I remain just as demanding, but now I’m in better company.”

Owner of fourteen restaurants worldwide (seven of which are in New York) and no stranger to TV appearances and galas, being in good company is essential for Chef Boulud.  But isn’t it a bit contradictory to come out with a new cookbook now that he spends less time in the kitchen?  Boulud brushes off such comments. “I have friends who own just one restaurant and spend less time in the kitchen than I do.  Of the 80 hours [a week] that I work, I spend more than half my time in the kitchen.”  Undoubtedly, his readers will need a bit of practice to pull off a Clafoutis à la Lavande (Lavender Clafoutis) with flying colors.