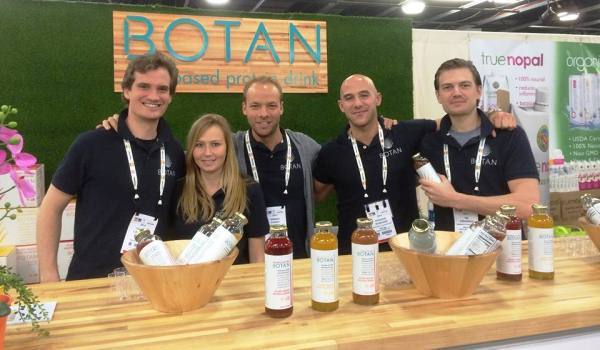 It may not be as ubiquitous as Coke but its recipe is just as carefully guarded: a trendy-looking bottled beverage called Botan in flavors like cucumber-strawberry and cherry tomato aims to be a game-changer in energy drinks. “We were just recently contacted by Coca-Cola and Pepsi,” says Botan’s creator proudly, “They wanted information about how we make it.”

With 12 grams of protein per bottle and just 110 calories, Botan is a liquid phenomenon that the body-conscious from muscle men to health nuts are reaching for. In only nine months since its creation, entrepreneur Edward Cannan has seen his 100 per cent vegan concoction go from unknown to flying off the shelves of select stores. “It’s already being sold in over 2,500 locations, including a partnership with Whole Foods,” beams the Franco-Brittish 32-year-old.

The premise of the drink was simple from the beginning: no animal products, no GMOs, no gluten, plenty of protein and few calories. Cannan, an athlete, realized the need for such a product after a serious accident had him on a diet heavy with animal proteins. “[The animal proteins] caused the levels of uric acid in my body to spike, so I was forced to turn to plants and that’s how I discovered their incredible potential.”

And then there was taste. At the time, vegetable-basted protein drinks on the market weren’t exactly appetizing. “I had the idea to ask a laboratory to create an ultra-high-protein vegetable product but that is easy to digest and without sediment,” he explains. “They thought I was crazy at first, but then they took up the challenge. Now Botan is the only drink of its kind on the market.”

Cannan says his drink embodies a spirit of eternal youth. “My injury made me aware of the limits of my own body. In 10 years I want to still be able to beat my nephews at tennis!” he declares. Though recent excitement around Botan has him appearing on TV channels from Bloomberg to Fox News, Cannan still runs his business from Santa Monica where he also lives, no more than a five-minute drive from the beach. “I get up very early to go surfing. Then I come back in great shape to start the day.”

Cannan doesn’t see himself ever returning to his native France to live, though he does think his drink could have success in some European countries. “Countries like Great Britain or Germany have a definite potential because physical health has an important role,” he says. “In France though, I’m less convinced. People there are too attached to the finer things,” he says.