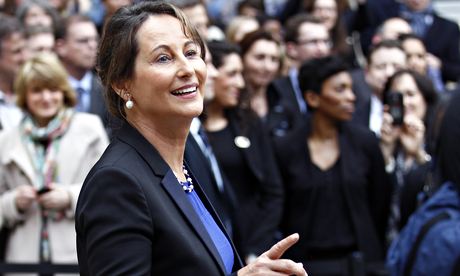 Royal is Back (Segolène, that is!)

Segolène Royal is Back in Wake of Hateful Trierweiler’s Demise…Segolene Royal Declares This Is Not Revenge…Ex-girlfriend Segolène Royal Makes Grand Return…Just a few of the headlines in English-language media following last week’s government reshuffle here in France, which was marked—as you can read—by the much-noticed naming to a cabinet post of the former partner of president Hollande. This was essentially the only commentary English-language media made about the new cabinet. In part, perhaps, because the new cabinet isn’t actually very different from the old one, but mostly because the Anglos just can’t get over the way the French seem to let things like life and love and complicated relationships coexist with…everything else.

Everything else, in this case, being the running of the country.

It’s not that the French don’t care (that would really be the stereotype, to think that the French are always mixing up sex and l’amour with everything). Many French media did question whether this doesn’t feel like yet another act in a national vaudeville. But it was inevitably a rhetorical question that most commentators decided wasn’t really relevant in these circumstances where Royal’s return to the government as one of the most experienced national politicians on the left (this is the fourth time she’s been minister) simply made good political sense.

As for the rest? Well, the rest happens, even when it’s a bit tawdry, even when it happens to a president and a former presidential candidate.

Where Anglo-Saxon media headlined on Royal’s personal revenge on her former “rival,” Valerie Trierweiler, the woman for whom François Hollande had left her, French media headlined on her political revenge. After losing the presidential election of 2007, then losing in the race to head up the Socialist party in 2011, and then losing her seat as an MP in 2012, she’s back in a big-time political post for which not one single French media is contesting her legitimacy.

If there was any speculation about the potential weirdness of the two ex’s sort of running the country together it was about the possibility that, in cabinet meetings, because Royal is among the highest-ranking ministers, she and Hollande could end up literally sitting next to each other. That, even the French tacitly concede, could be awkward.

Why then does this seem so spectacular to Anglos? So headline-worthy? Admittedly, this particular mixture of sentimental and sexual circumstances really is sensational (lovers, rivals, girlfriend first ladies, an actress mistress, nervous breakdowns, etc). But foreign media go even further, they seem to want to make Royal’s comeback into something extraordinary, something morally meaningful. The headlines evoke elements of hard-won triumph (“Out of the Wilderness, Into the Government”) and destiny (“Grand Return”). Even a sense of rightness and justice (“Back in Wake of Hateful Trierweiler’s Demise”). It sounds epic.

When really, if this all hadn’t been so public an affair, it’s quite ordinary. So seem to think the French. The fact is the French have been living with the Hollande-Royal couple for years—since 1981 to be exact. They graduated together in the late 70s from the elite academy for future politicians called the Ecole Nationale d’Administration, where they met, and launched careers in Socialist politics that would be intertwining–and inter-dependent–stories of rapid success over the course of the next 30 years. They also intertwined a relationship and four children, the last of which became a public event when Royal, then Minister of the Environment under Mitterand, allowed cameras in her hospital room when her fourth child was born to show that women could have both big jobs and babies. They are an old familiar couple around here.

And they are also a couple like so many others. Here is the main difference between the Franco and the Anglo outlook. The idea of the ultimate banality of these relationship issues. The idea that life happens and should. The idea that men and women get involved, that things can end up going in improbable directions, that the end is never foretold at the beginning, that it isn’t always rational, but nor should it be. It isn’t right or wrong, it just is.

Yes, the French do have a way, certainly more than Americans, of letting life–babies, love stories, break-ups, sex–happen. There is less compartmentalizing. Probably, as a result, somewhat less denial, somewhat less friction and, maybe—hard to measure—somewhat more pleasure in things. In any case, wouldn’t it be nice if that particular received idea were true?