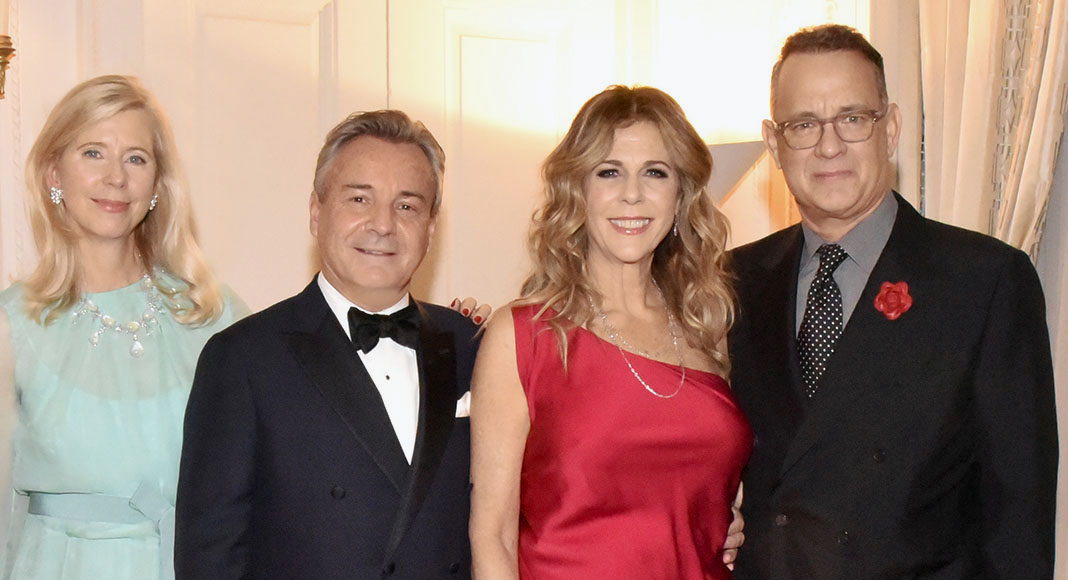 Rita Wilson Shines at the American Friends of Blérancourt Gala

“Tonight I’m escorting the heroine of the evening,” smiled Tom Hanks from the inside of a historic private club originally reserved for women on the Upper East Side of New York.

Two days before the centennial anniversary of the armistice on November 11, 1918, the non-profit organization The American Friends of Blérancourt presented the first Anne Morgan Women of Courage Award to Rita Wilson, an actress (“Sleepless in Seattle,” “Just Married”), producer (“My Big Fat Greek Wedding,” “Mamma Mia!”), composer and singer. She was accompanied to the gala by her husband, Hanks, an actor (“Forrest Gump,” “You’ve Got Mail,” “Saving Private Ryan”) and producer (“Castaway,” “Evan Almighty”).

“It’s a great honor to be here tonight,” said the actress involved in the Time’s Up movement in Hollywood. “This evening is an opportunity to highlight this incredible woman, Anne Morgan,” she noted to the crowd of some 120 guests who came to attend the association’s annual gala. “She came to France to help rebuild the country after the First World War. She understood that women were strong, that they could have a voice and make a difference at the beginning of the century, at a time when it was unusual,” says Wilson, who also remarked in perfectly accented French that she loves France.

The association, which celebrates five centuries of Franco-American friendship that are retraced and on display in the Château de Blérancourt Museum in the Hauts-de-France region, unanimously chose the actress to be the prize’s first recipient. “Rita Wilson is really in Anne Morgan’s vein. “If Anne had stopped working, the support effort would have stopped, which is also the case in the world of cinema: a film is only made thanks to the people who work on it every day,” said the organization’s president, Dorothea de La Houssaye.

In the future, the prize will be awarded in March, to coincide with Women’s History Month, explains Franck Laverdin, Chairman of the Board of Directors. “The idea is to honor a woman whose actions lead to the actions of other women developing a movement or charity, the way Anne Morgan did when she recruited 350 volunteers among her friends to rebuild Picardy,” he adds.

Will the star couple do a film about the philanthropist’s life? “My wife should play Anne Morgan. Me, I’ll just play some guy,” remarks Hanks, who calls himself “proud” and “lucky” to be in his wife’s shadow for the evening.