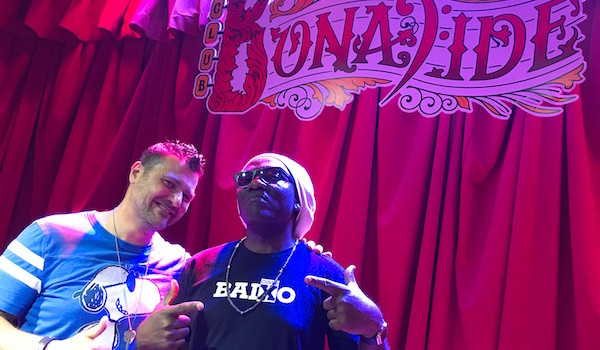 Bonafide: This Club is Midtown Heart of Afro-French Beat

Proposal for the new dream team: a professional French restauranteur and a world-renowned Cameroonian bassist.

One year ago, Laurent d’Antonio, owner of Williamsburg restaurants Pates et traditions and Santos Anne, joined forces with famous Cameroonian bassist Richard Bona to open Bonafide, a multi-cultural music hall nestled on East 52nd Street in Manhattan. “I opened a concert hall with my idol,” said d’Antonio, speaking above the reverberations of music from next door’s rehearsal room. Since the club’s opening, they’ve hosted many renowned musicians, including Sting. This past summer, Bonafide was rocking with musical acts Wednesday through Sunday night.

The duo first met on d’Antonio’s first trip to New York, twelve years ago. One of d’Antonio’s parents was a bassist collaborating with Bona, and d’Antonio was dutifully on hand. “I had all his CD’s at my house,” d’Antoino says, reflecting of his childhood reverence for Bona, who has played with many great musicians like Manu Dibango, Salif Keita, and Branford Marsalis to name a few. “He’s a total musician who brings a lot of happiness to others through his work.”

Eight years ago, d’Antonio moved to New York. He and Bona became friends and fantasized about opening a business together. Last year, a pianist friend of d’Antonio contacted him to ask him to be a part of a “super deal” in Midtown. The deal involved taking over a space, formerly occupied by Le Somthin’ Jazz Club, a club well-known for its amateur jazz players. D’Antonio and Bona went for it. With the help of a few musician friends, Bonafide opened in September 2015. French musician Manu Katché sent a drum set as a housewarming gift.

But re-opening a club in New York is trickier than the same old song and dance. The new owners wanted to create something new. “We like Cuban music, African music, country music…” listed off d’Antonio. The performers at the club come from a wide range of musical genres, creating a very unique sound. “The musicians and the producers who come to us said that we have one of the best sounds in New York,” boasted d’Antonio. After one year of success, they already have plans for the future. “On the long term, we want to open concert halls outside the United States,” d’Antonio says. “Money is needed to live, but we can’t give that to millions.”

This weekend, Bonafide celebrates their one-year anniversary with two performances by Richard Bona and his band Mandekan Cubano. They’ll mostly be jamming to pieces from their most recent album, Heritage. Me, I’m living out my childhood dream.”